The Ridiculous Warrant Application Behind a Fruitless Marijuana Raid

A Texas cop was sure those hippies were growing pot on their farm. 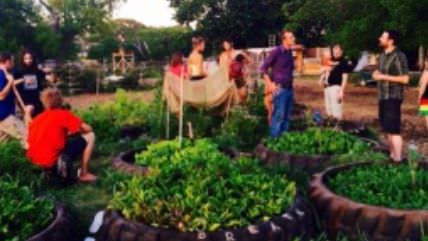 On August 2, 2013, a SWAT team of 15 to 20 officers stormed the Garden of Eden, a farming commune in Arlington, Texas, looking for marijuana and weapons. The cops handcuffed commune leader Quinn Eaker and seven other members for a couple of hours while they turned the place upside down, searching for the cannabis plants, buds, marijuana cultivation equipment, scales, packaging, and drug sale records mentioned in the warrant application. They found nothing. Police detained the commune members for another seven and a half hours while city inspectors went over the property, looking for code violations. They also found no contraband. I would say the raid was fruitless, except that the code enforcement officers did uproot and cart away a bunch of hackberry bushes.

Why were the cops so sure that the Garden of Eden was a front for drug trafficking? Because it was a bunch of fucking hippies growing stuff, so of course they were growing marijuana. As detailed in a federal lawsuit filed last month by Eaker and four other victims of the SWAT raid, the justification for this armed invasion was not much stronger than that.

In her search warrant affidavit, which is Exhibit A in the lawsuit, Arlington Detective Magdalena Perez claimed Eaker possessed "a usable quantity of marijuana of two ounces or less" in Arlington "on or about July 30, 2013." Perez cited no basis for that assertion, and Eaker says he neither possessed marijuana nor interacted with police in any way that day. The Houston Chronicle reports that "a search of Arlington court records turned up no marijuana or other drug charges in Eaker's name."

The website for the Garden of Eden also advertises "Uber Dank High Vibe Cuisine." While the website indicates that Uber can mean "over the top," "extraordinary," or "super," and Dank can mean "high quality" (mostly for consumables) or "overflowing gratitude," your AFFIANT knows through her training and experience that "Uber Dank" is also slang for high quality marijuana. AFFIANT also knows that individuals who consume marijuana often refer to the sensation felt after consumption as a "high." The website mentions the word high multiple times while describing the food. In addition, AFFIANT knows that some people consume marijuana by baking it into their food.

As it turned out, of course, AFFIANT did not know anything. So what did she do to confirm the suspicions aroused by her close reading of the commune's webite? Perez said she began investigating the Garden of Eden "based upon multiple reports that the residents of the property were growing marijuana." Reports from whom? She did not say, but later in her affidavit she mentioned "an anonymous source of information," who may have contacted police more than once. This person reported that "Quinn Eaker of the 'Garden of Eden' community is growing marijuana that is covered by bamboo and that there were weapons, specifically two rifles and one pistol, on the property." Judging from the results of the search, this anonymous source, who presumably had a grudge against Eaker or the commune, was just making shit up.

Did Perez seek to verify this "information," or did she accept the word of an anonymous source at face value? She reported that she had sent some intrepid undercover cops to a "public event" at the Garden of Eden, where Eaker talked to them about gardening, "growing different types of bamboo," and "various workshops that he conducts on the property." Eaker and property owner Shellie Smith (another plaintiff in the lawsuit) gave the cops a tour of the commune, but "there were portions of the Garden of Eden which officers were not able to access."

Pretty damning stuff, but Perez did not stop there. She went the extra mile to make sure her warrant application was airtight by soliciting the help of "Agent S. Reynolds," a marijuana cultivation expert at the Texas Department of Public Safety. After flying over the property in a helicopter at "more than 400 feet," Reynolds reported that he had seen a 30-by-30-foot area with "perimeter plants that appeared to be taller than the interior plants," and "the interior plants did appear to be consistent with marijuana plants." Maybe it was okra. Actually, according to the lawsuit, it was okra, along with tomatoes, peppers, and basil.

One thing we know for sure: It wasn't marijuana, a point that Eaker and his co-plaintiffs say Perez easily could have confirmed by examining the aerial photographs taken by Reynolds. In her affidavit, she said only that she "viewed digital photographs taken during the aerial surveillance and recognized the property." The lawsuit also notes that the area described by Reynolds was not one of the "portions of the Garden of Eden which officers were not able to access" when they took a tour of the property prior to the raid. The implication, says the lawsuit, is that "the officers walked right through the 30 by 30 foot area, perhaps with Smith or Eaker side by side with them, inspected the plants and found no marijuana. This 'boots on the ground' surveillance of the 30 by 30 foot area would have eliminated any idea that there was marijuana there."

A magistrate evidently thought the undocumented possession offense, the online discussion of food, a farmer's interest in farming, the anonymous tip, and the ambiguous report from Reynolds (which seems to have been biased by the tipster's false information) added up to probable cause. Eaker and his co-plaintiffs disagree. They also argue that their detention, which lasted from about 7:40 a.m. until 5 p.m., was unjustified and excessive. They are seeking compensation for the property and emotional damage caused by the raid, along with the legal expenses they have incurred. They are also asking for punitive damages, "because the City of Arlington and Detective Perez showed a reckless and callous indifference" to their constitutional rights.

"I'm passionately convicted in saying this is not how we treat people and this is not how a successful, efficient, honorable society operates," Eaker told the Chronicle. "This is not in line with freedom."