The big news about same-sex marriage this past weekend was Ireland's vote to legally recognize such unions. But while that may have been a milestone, it wasn't really a surprise; the polls predicted the outcome far in advance. The gay-marriage news that made me do a double take was buried in a parenthetical comment near the end of a Boston Globe dispatch from Kennebunkport:

Some mornings, [Jeb] Bush drops into H.B. Provisions, a cozy general store owned by Bonnie Clement and her wife, Helen Thorgalsen (George H.W. Bush made international headlines when he attended their wedding in 2013; George W. Bush offered to perform the ceremony but had a scheduling conflict). 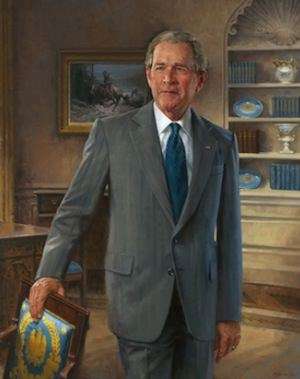 Wait: Was this widely known? Not the part about George H.W. attending the wedding—he did indeed get the media's attention when he served as an official witness that day. I mean the part about George W. offering to officiate. If that's true, that's a milestone of another kind: not the sort that marks a social revolution, but the sort you see when a change that once sounded revolutionary doesn't feel all that radical anymore.

Just nine years before that ceremony, opposition to same-sex marriage was a central part of Bush's reelection strategy. No, it probably wasn't the issue that put him over the top; and yes, he's less constrained in private life. Still. Time, it does move quickly.