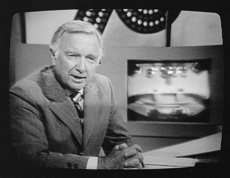 Walter Cronkite has died at age 92. My parents watched him when I was a boy, so his avuncular-grandpa image was imprinted on me early; to this day, I can't read the phrase "Dow Jones Industrial Average" without hearing it in the old anchor's baritone. I had no idea what the Dow was back then, but it was comforting when Cronkite talked about it. If the country had to have a collective father figure, he was well suited for the job.

The problem was that we didn't need a national father figure. The very phrase "the man America trusted" makes me uneasy. Surely it's good that the country has grown too skeptical to put so much faith in a single newsreader.

The Cronkite personality cult reached its strangest moment in the election of 1980, after Hugh Sidey wrote this passage in Time:

Last week a group of concerned Americans clustered around a television set in Chicago for an updating on their own state primary. Their focus was not on a local luminary but on Walter Cronkite, who had come to the provinces and set up his majestic broadcast booth. His noble gray head appeared at the bottom of the screen, a gigantic red, white and blue map of the U.S. spread out behind him. Not since George C. Scott opened the movie Patton had such a dramatic entrance been filmed. There were quiet gasps among the appreciative Chicagoans.

Cronkite for that second or two consumed everybody who watched. He was everything the real world was not. Cronkite was truth, stability and reality. "My God," one of the viewers muttered, "why don't we get it over with and elect Cronkite President?"

It was a joke, of course. But it was a wistful what-if of a joke, and it resonated. Time soon ran letters hailing the idea. "He knows more about national and international problems than any other two candidates put together," declared one reader, "and, as a duty, I think he would accept the miserable job." Four years later, the newsman was still fending off suggestions that he run for the office and "make a difference." Can you imagine anyone spouting such a fantasy about any of our anchors today? Maybe Stewart or Colbert, but not someone who delivers the news with a straight face.

And that's good. Cronkite's influence was a product of the three-network era, a time we should be happy to have put behind us. I'm sorry to see the man die, but I'm glad no one was able to fill his shoes.