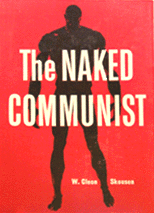 Conspiracy theories always flourish during economic downturns. They flourished during the terrible slump of the 1890s (when they captured even so fine a mind as Henry Adams) and again in the 1930s.

I suppose that's true. But they also flourish during economic upturns. Since Frum is specifically attacking Beck for spreading tales of FEMA concentration camps, it's worth noting that the very same fears were previously popular on the left during the booming '80s and on the right during the booming '90s. Frum also mentions that Beck has been handing out a tome by the Birchite writer W. Cleon Skousen. And when did Skousen and the Birchers have their heyday? In the booming '50s and '60s.

"Today's slump — so vast, so difficult to understand — opens the door again," writes Frum. But the door was already open. It never closes. If the modal Fox viewer is more receptive to these particular theories now than he was this time two years ago, that might have something to do with the recession. But it has much more to do with the fact that a Democrat is now in the White House.