A sex panic shuts down Operation Santa Claus, a long-lived charitable tradition in which volunteers read poor people's letters to Father Christmas and then personally bring presents to Santa's supplicants: 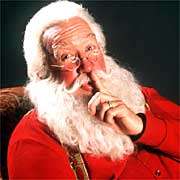 The United States Postal Service abruptly shut down public participation in all the Operation Santa programs—in New York and other major cities across the country—at 1 p.m. Wednesday, without offering post offices or letter-seeking citizens any understanding of why.

A Postal Service official in Washington, after an initial, limited acknowledgment of a "privacy breach," said that at one of the programs, not New York's, a man whom a letter carrier recognized as a registered sex offender had "adopted" a letter. When postal officials confronted the man, the official said, he said he was sincerely trying to do a good deed, but postal inspectors nonetheless retrieved the letter and notified the family of the child.

The Postal Service, indicating that the closing down of all of Operation Santa might be temporary, said that it felt it was wise to take the precaution.

The post office is now talking about a revised approach in which the recipients will be anonymous, the government will operate an elaborate matching system, and donors won't deliver their presents in person. Debbie Nathan argues that this won't work, pointing out that the charity "was always based on complex class relations and conflict, complete with reticulated fantasies that could only be satisfied by the letter reading, the name gathering, and those noblesse oblige home visits. Without all this, the program is kaput."