When I wrote my review of Tom Frank's The Wrecking Crew, there was a passage in the text that I didn't have space to address. It demonstrates the ways even the one genuinely worthwhile section of the book — Frank's history of '80s conservatism — can go awry: 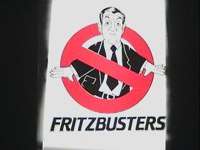 When Conservative Digest asked Abramoff whom he supported in the 1984 presidential contest, the young roughneck exploded: "Are you kidding? Wally Mondale is a boring wimp." Others on the right taunted "Fritz" Mondale as a "quiche eater," after the squishy food for which "real men" were said to have no appetite, and a squad of CRs [College Republicans] mocked the "wimp" to the catchy theme from Ghostbusters, dancing and singing "It's Ronnie's time; Fritz is a slime." The group reportedly sold almost fifty thousand T-shirts emblazoned with their "Fritzbusters" logo and along the way gave me my first taste of the tradition of gleeful malice that is observed so carefully in conservative circles.

A footnote points out that "'Fritzbusters' images can be found wherever one digs in the right-wing student literature of those days, and the shirts and stickers can still be found in thrift stores and on eBay."

I don't have any interest in sticking up for the mid-'80s College Republicans, but as evidence of a particularly conservative form of "gleeful malice" this is pretty thin gruel. Not just because it wasn't especially malicious by campaign standards, but because it wasn't limited to the Republicans. As a teenager in North Carolina at the same time, I owned a "Helmsbusters" button with essentially the same design. And there was plenty of "Ronbusters" and "Reaganbusters" merchandise out there as well.

The striking thing here isn't that Frank is apparently unaware of the equivalent material on the left. At the time he was a conservative teenager in a conservative state, and I'm not surprised if he didn't see the buttons, posters, and T-shirts available on the other side of the spectrum — especially in a year when liberals weren't exactly omnipresent. What's striking is that he would use that CR kitsch as evidence of something peculiar to the right without checking whether Democrats also adopted what was, after all, a pretty obvious pop culture reference. If Frank was already running "Fritzbusters" searches on eBay, how much work would it have been to type in "Reaganbusters" as well and see what comes up?