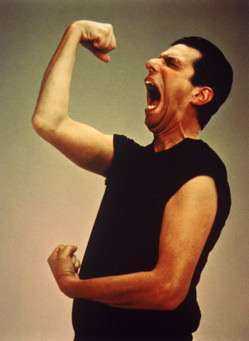 During the revolution the year before, the Vietnam-era culture wars had escalated into fist fights, even mob fights, between the "jocks" and the "freaks" (and even "pukes"), as protestors were called….Kenneth Koch stopped his poetry class from rushing down from Hamilton to join in a brawl between jocks and freaks going on below by crying out, like a WWII movie heroine, in his campiest voice, "Stop! WE'RE … what they're FIGHTING FOR!" His students broke up laughing, sat back down and Koch went on with the lecture, while the jocks and freaks punched it out outside.

Researching in Butler and Avery libraries, [Elizabeth] Guffey discovered George's twice-weekly Spec ads: "Jocks! Freaks! ROTC! SDS! Let there be a truce! Bury the hatchet (not in each other)! Remember when we were all little greaseballs together" (p. 113). The ads consciously "evoked," Guffey commented, a "vision of the Fifties as a pre-political teenage Eden."

After Woodstock, Sha Na Na founders John "Jocko" Marcellino '72, Don York '71, Rich Joffe '72, '93L, Scott Powell '70 and manager Ed Goodgold '65 gained the talents of Jon "Bowzer" Bauman '68 and "Screamin'" Scott Simon '70. Their popular television show joined with Happy Days and Grease popularizing the new myth. By the 1980 Presidential election, America had embraced the dream of the Fifties as a pre-political Golden Age. So much so, [Daniel] Marcus painstakingly shows, that the American political landscape was altered to take advantage of this invented cultural memory.

Watch the movie version of Grease today, with its half-disco soundtrack and its closing wisecrack about Nixon, and it's obvious that it's "about" the 1970s much more than it was ever about the '50s. But I'm not sure that was self-evident at the time. (As my mom said to my dad as my family watched the film on TV, circa 1980: "There really were people who lived like this.") Lest you think this reinvention process stopped in the Carter era, go rent The Brady Bunch Movie, with its curious conceit that the early '70s were a lost age of innocence. (For the target audience, most of whom were under 10 in the original Brady era, perhaps it was.)