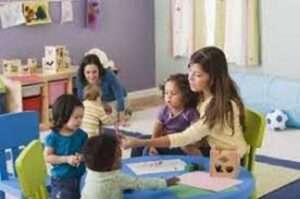 Last Friday, the US Court of Appeals for the DC Circuit upheld an onerous Washington, DC law requiring child care workers to have a college degree. The ruling is understandable in light of Supreme Court precedent giving the government very broad deference in enacting "economic" regulations (though it stretches even that precedent to the limit). But if the ruling is a correct application of precedent, it serves to highlight how awful the precedent itself is.

As described by the court, the DC regulation requires childcare workers in "child development homes"—defined as "private residences where two or more caregivers are responsible for up to twelve children" to have "at least an associate's degree 'with a major in early childhood education, early childhood development, child and family studies or a closely related field.'" Teachers in "childcare facilities serving more than twelve children outside the operator's home" are required to either get an associate's degree of the type described above or—if they already have a college degree in another field—they may instead "complete at least twenty-four credit hours [of higher education] in subjects related to early-childhood education."

Williamson v. Lee Optical (1955),  the leading Supreme Court precedent on licensing and other "economic" regulations, says that the the Due Process Clause of the Fourteenth Amendment (which bars states from restricting "life, liberty, or property" without "due process of law"), is satisfied so long as the regulation in question passes a minimal "rational basis" test: it must be "rationally related" to a "legitimate" state interest. The interest in question need not even be one specified by the state legislature that enacted the law or by the government lawyers defending the regulation in court. It could even be a hypothetical interest made up by the judges considering the case. Justice Antonin Scalia once wrote that the rational basis test is really just a test of whether the legislature has a "stupid staff." Any reasonably intelligent staffer could come up with a rational basis justification for almost anything.

The DC Circuit concluded that the DC child care regulation passes the test because getting a degree in early childhood education pretty clearly facilitates provision of childcare. Even if some of the courses workers could take under the requirement do not relate to child care,  "OSSE [the agency issuing the regulation]could [still] rationally issue the challenged regulations without needing to parse the curriculum of any particular school." Indeed, "Even if all associate's degree programs contain at least some irrelevant content,  still could have rationally concluded that requiring childcare workers to complete a predominantly relevant course of study will improve the quality of care young children receive." Furthermore, even course content irrelevant to child care, as such, could rationally be required "A variety of courses outside the early-childhood major, from math and English to art and history, could be beneficial to someone tasked with the educational development of toddlers—as any adult who has been flummoxed by a two-year-old repeatedly asking 'why' can attest."

This reasoning is utterly ridiculous. Any adult with experience in caring for small children knows that it's perfectly possible to do the job well without having a college degree of any kind. When I was in middle school and high school, I spent hundreds of hours working as a babysitter for toddlers, all without ever feeling the need to for any information that could only be learned in college (indeed, I didn't even have a high school  diploma at the time). Rare is the parent who, in choosing daycare facilities, cares whether the employees have college degrees or not.

The court's rationale for the regulation also errs in conflating two different services: childcare and education. Even if higher education credentials are valuable for the latter, they are not necessary for the former. The DC regulation applies even to facilities that just provide care, without claiming to educate.

Of course, it is always possible to argue that college-educated workers will, on average, be better than those who lack such degrees. If nothing else, having a college degree might correlate with being more intelligent or more conscientious. But that argument could justify regulations requiring a college degree for pretty much any job. A college-educated Uber or taxi driver might, on average, be better than one with only a high school diploma. If the driver is required to take college courses on physics, mechanics, and transportation policy, he or she might do a better job of caring for his vehicle. Any competent lawyer—or any non-stupid staffer, as Scalia might put it—can think of similar rationales for requiring college degrees for workers in any field of any kind.

That's even more true if we take seriously the court's most absurd argument: the idea that a college-degree requirement is justified by the need to ensure that childcare workers can answer all of the questions posed by toddlers. Between us, my wife and I have five different elite-college degrees (including three graduate degrees). Yet we are still sometimes stumped by the questions posed by our kids (currently aged 7 and 4). Maybe we could give better answers if we had even more degrees! If I added  PhDs in chemistry and physics to my other credentials, I could better answer my some of my daughter's questions about scientific issues. By this reasoning, there is no limit to the educational qualifications that could be required of childcare workers.

Despite the absurdity of the court's reasoning, it's plausible to argue that this rationale for the DC regulation still satisfies the rational basis test. After all, as the court notes, all the test requires is a "conceivable state of facts" that could justify the regulation.

But, in recent years, as the court recognizes, some state and lower federal courts have nonetheless struck down licensing regulations that seem ridiculously disproportionate to any public interest rationale that might be offered for them. For example, a well-known Sixth Circuit ruling struck down a Tennessee regulation requiring casket manufacturers to be licensed funeral directors, because "The weakness of Tennessee's proffered explanations [for the requirement] indicates that [it]…. was nothing more than an attempt to prevent economic competition," one that 'come close to striking us with the force of a five-week-old, unrefrigerated dead fish.'"

The DC childcare regulation seems comparably fishy—and stinky! It too looks like a blatant attempt to stifle competition for the benefit of incumbent providers. Indeed, longtime incumbents are actually exempted from the education requirements, if they have worked in the business for at least ten years.

While it's easy to make fun of the DC policy and the court's reasoning upholding it, the harmful results of such regulations are deadly serious. They shut out numerous perfectly competent workers from a variety of occupations. And they make important services more expensive for consumers. For both workers and consumers, the burden falls disproportionately on the poor, including many minorities.

As a legal matter, the court's lame reasoning might be fine if such an approach required by the Constitution. Some stupid and unjust policies are nonetheless constitutional. But, as scholars such as David Mayer, Bernard Siegan, and VC co-blogger David Bernstein, have shown, the original meaning of the Fourteenth Amendment in fact requires substantial protection of occupational choice against anti-competitive regulations that do little or nothing to protect health and safety. If you're a living constitutionalist, you should be wary of giving a blank check to regulations that have a long history of being used to exclude the poor, minorities, and politically weak.

It may sometimes be difficult to draw a line between competition-suppressing licensing rules and those that may have a truly legitimate public interest rationale—one that can pass more rigorous standards of review than "rational basis." But similar line-drawing problems are ubiquitous when it comes to judicial protection of other constitutional rights. For example, in Fourth Amendment cases, it is often difficult to draw a line between "reasonable" and "unreasonable" searches and seizures. Yet few argue that problem means that courts should apply anything like the "rational basis" test in such cases.

Ultimately, there is no good reason to apply the rational basis test to "economic" rights, while deploying more rigorous judicial review elsewhere. The DC childcare case highlights the absurdities created by this double standard.

It is also worth noting that the DC ruling is not the result of aberrational incompetence by the judges who heard the case. Indeed, it's difficult to come up with a more star-studded appellate panel than the one that heard it. The court's opinion was written by Judge Sri Srinivasan, a distinguished jurist often seen as a potential Democratic appointee to the Supreme Court. The other members of the panel are big-name conservative judges Gregory Katsas and A. Raymond Randolph. If these jurists endorsed absurd reasoning leading to an absurd result, it is in large part because the legal doctrine they were applying is itself absurd.

NOTE: The plaintiffs in this case are represented by the Institute for Justice, for which I served as a summer clerk when I was a law student, and have written pro bono amicus briefs in various cases more recently. I do not have any involvement in the present litigation, however.