Since its publication on Thursday, my New York Times Op-Ed has continued to stimulate dialogue and discussion. It was also published in Saturday's print edition. This post will highlight a few of the responses.

First, Ross Douthat wrote an op-ed, titled "Trump's Best Defense It's that he wants to be L.B.J., not Mussolini. (But that's still a problem.)"

In a Times op-ed this week, the Josh Blackman of the South Texas College of Law Houston argued that this narrowing of the impeachment power reflects the difficulty of defining when politicized machinations shade into the abuse of power. Allowing that Trump is particularly crude about it, all presidents conflate their own political self-interest with the national interest — and so deciding when a president crosses the line and betrays his office is almost always a task best left up to the voters.

Both the strengths and limits of Blackman's argument are distilled in one of his historical examples: Lyndon Johnson's appointment of Supreme Court Justice Tom C. Clark's son Ramsey Clark as attorney general, part of a maneuver to induce Clark's resignation so that Johnson could then appoint the first African-American justice and consolidate African-American support.

This is a useful example because it's been apparent for a while that Trump doesn't want to be an American Mussolini so much as he wants to be a less legislatively minded L.B.J. — meaning that his conception of the presidency belongs to the middle of the 20th century, when a casual corruption was more commonplace, and presidents routinely used their powers to spy on political opponents (as L.B.J. did to Barry Goldwater) or undermine them, enable their private appetites (cough, J.F.K.) and cover up their scandals.

Second, Matt Ford wrote an essay for The New Republic, titled "The Best Defense of Donald Trump: A conservative legal scholar presents an exculpation of the president that's worth engaging."

But in this late hour, an exception has arrived in the form of Josh Blackman, a South Texas College of Law Houston professor. Blackman is a conservative legal scholar who has played a notable role in the legal battles surrounding the Affordable Care Act. He does not share Trump's most extreme legal stances on impeachment. Blackman acknowledges that an impeachable offense "need not be criminal," and he disagrees with Trumpworld's constant assertion that impeachment amounts to the overturning of an election. While senators may have no choice but to listen to Trump's lawyers, engaging with the strongest alternatives available is more productive for everyone else.

Matt raises a number of important points that I hope to respond to in due course.

What of the case made by law professor Josh Blackman in the New York Times on Thursday: that presidents often pursue policies in hopes of improving their political prospects? It is true, of course, that presidents consider domestic politics, including electoral politics, in everything they do. There's nothing wrong with that. Presidents should act to increase their influence, and that includes taking actions with their professional reputation and personal popularity in mind. . . .

Blackman's analysis is also wrong because it matters how a president uses policy for political advantage. Trump is accused of soliciting foreign election interference! Unlike maneuvering to get a Supreme Court justice to resign, or even deploying troops, Trump tried to get a foreign nation to influence an election. That's not just a likely violation of U.S. law; it's contrary to his oath to "preserve, protect and defend the Constitution of the United States."

Fourth, Laura Ingraham talked about my piece on her Fox News show:

Fifth, Ben Shapiro discussed my piece on his podcast. (Many, many law students in particular listen to Shapiro.)

Finally, Fox News analyst Gregg Jarrett flagged my article on Fox News's website, as well as his own blog.

In an excellent opinion column in The New York Times, Constitutional Law Professor Josh Blackman reiterated the Lincoln example and also cited the actions of President Lyndon Johnson in 1967 when he maneuvered to appoint Thurgood Marshall as the first African-American justice to the U.S. Supreme Court. This advanced civil rights enormously, while also burnishing Johnson's political standing.

As Blackman explained: "Politicians routinely promote their understanding of the general welfare, while, in the back of their minds, considering how those actions will affect their popularity. There is nothing corrupt about acting based on such competing and overlapping concerns. Yet the impeachment trial threatens to transform this well-understood aspect of politics into an impeachable offense."

And then President Trump retweeted Jarrett--the closest I've gotten (so far at least) to a presidential tweet. 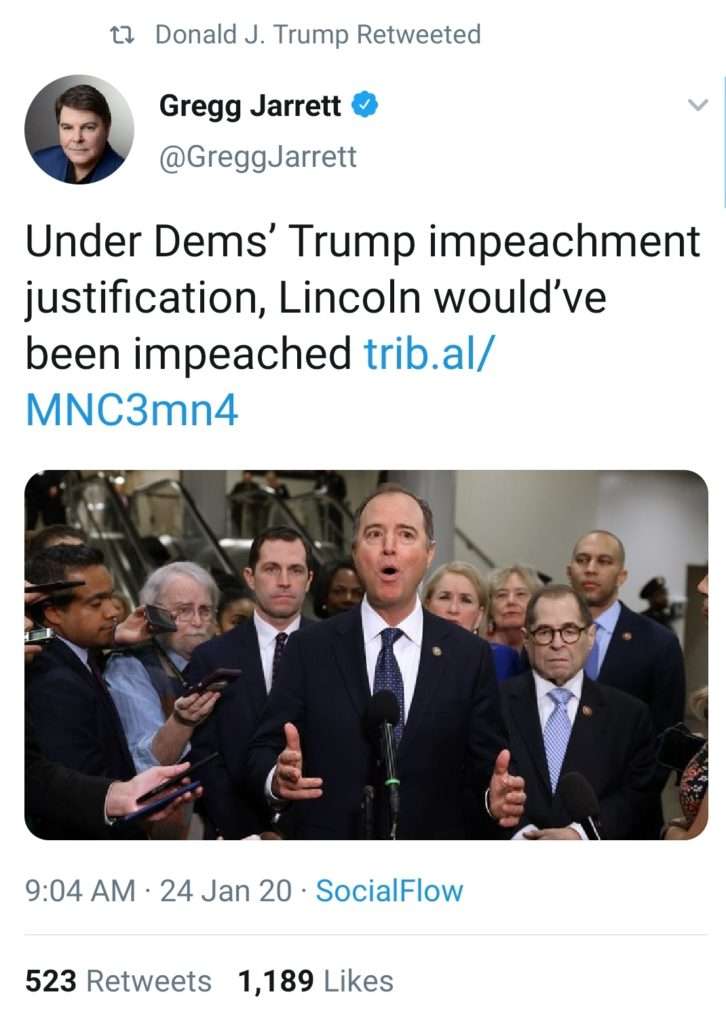 On Friday morning, I noted that I would try to avoid checking my Twitter mentions. So far, so good. I think my new policy will be to post onto Twitter, but not check how people react. If there is something important you want to tell me, email me, don't @ me. And if there is some breaking news that you think I should be aware of, please email me as well.