"Although some materials can be effectively recycled and safely made from recycled content, plastics cannot. Plastic recycling does not work and will never work," assert Judith Enck, a former regional administrator with the Environmental Protection Agency, and chemical engineer Jan Dell in The Atlantic. Never is a long time.

Leaders of the activist groups Beyond Plastics and the Last Beach Cleanup, the two researchers cite data from their organizations' recent joint report that found that the recycling rate of plastics in the United States has fallen to an abysmal 5 percent. They argue, "The problem with recycling plastic lies not with the concept or process but with the material itself." Why? Because there are thousands of different kinds of plastic that are simply too costly to handle separately. Their chief solution: A ban on single-use plastics.

Enck and Dell are entirely correct that plastic pollution, especially in the world's oceans, is a serious and growing problem. A 2021 report by the activist group the Environmental Investigation Agency calculated that humanity has, over the past 65 years, produced more than 10 billion tons of plastic, at least 6 billion tons of which are now in landfills or the open environment. 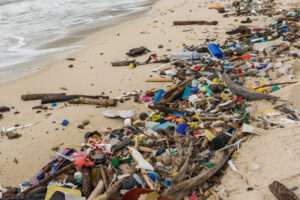 On the other hand, University of Manitoba interdisciplinary environmental researcher Vaclav Smil declares in his new book, How the World Really Works, that plastic is one of the "four pillars of modern civilization." (The other three are steel, concrete, and ammonia.) Smil points out that the global production of "these diverse and often truly indispensable synthetic materials" has increased from 20,000 tons in 1925 to 2 million tons in 1950, 150 million tons in 2000, and 370 million tons in 2019. If the world's still-poor countries seek to replicate China's recent rise from poverty, Smil projects that would involve a 30-fold expansion of plastic manufacturing over the next 30 years.

The good news is that there are some promising technical solutions for making plastics infinitely recyclable on the horizon. In just the past two months, two research teams, one at the University of Texas and another at the University of Leipzig, have announced the development of two different energy-efficient, low-temperature enzymes that quickly disassemble the ubiquitous polyethylene terephthalate (PET) plastic back into its basic molecular building blocks, also known as monomers. Those monomers then can be resynthesized into new PET products. PET accounts for 12 percent of global solid waste.

"Beyond the obvious waste management industry, this also provides corporations from every sector the opportunity to take a lead in recycling their products. Through these more sustainable enzyme approaches, we can begin to envision a true circular plastics economy," said University of Texas chemical engineer Hal Alper in a press release. By employing its powerful new enzyme process, the German researchers similarly note that "it is possible to directly recycle post-consumer thermoform PET packaging in a closed-loop process with a low carbon footprint and without the use of petrochemicals, realizing a sustainable recycling process of an important PET plastic waste stream."

Another approach is to develop infinitely recyclable plastics to replace problematic versions like PET. As I reported earlier, a team of researchers at the U.S. Department of Energy's Lawrence Berkeley National Laboratory has developed a new plastic called polydiketoenamine, or PDK. Items made of PDK can be bathed in acid that separates the plastic molecules from any additives; this material can then be reassembled into different shapes, textures, and colors again and again without loss of performance or quality. While producing virgin PDK resin is initially expensive, the researchers calculate that recycled PDK resin will be competitive with petroleum-based virgin plastic resins.

Of course, these specific new technologies for infinitely recyclable plastics may not take hold, but with respect to human ingenuity, never say never.