Back in the bad old days of the 2010s, folks like David Wallace-Wells, author of The Uninhabitable Earth: Life After Warming (2019) warned, "The UN says we're on track to get to about 4 degrees or 4.3 degrees of warming by the end of the century if we continue as we are." Or you may remember author Gaia Vince asserting in 2019 in The Guardian that "experts agree that global heating of 4C by 2100 is a real possibility."

Before rushing to kit out your climate prepper bunker, you might want to take a look at the new study by University of Colorado climate change policy researcher Roger Pielke that confirms what the Intergovernmental Panel on Climate Change found in August 2021, namely that the worst-case climate scenario is increasingly unlikely, and that while our future will be warmer, it will not be catastrophically so.

These dire predictions were based on calculations derived from a scenario of the future in which fossil fuel and agricultural emissions over the course of this century would boost atmospheric carbon dioxide to nearly 1,400 parts per million (ppm) by 2100. The current level of atmospheric carbon dioxide is just under 420 ppm, and that is up from the pre-industrial level of about 280 ppm. Largely as a result of this increase in atmospheric concentrations of greenhouse gases, global average temperature has risen to around 1.1°C above the pre-industrial level.

Climate researchers labeled this worst-case scenario "RCP8.5," and it has been somewhat updated in the new Intergovernmental Panel of Climate Change's Sixth Assessment Report (IPCC AR6) on the physical science basis of climate change and given a new moniker of SSP5-8.5.

The IPCC's AR6 report, released in August 2021, now acknowledges that "the likelihood of high emission scenarios such as RCP8.5 or SSP5-8.5 is considered low in light of recent developments in the energy sector."

The recent developments in the energy sector to which the AR6 report refers are that fossil fuel usage is likely to be fairly flat for the next 50 years. One of the main ways that the RCP8.5 scenario goes off the rails of plausibility is that it projects a six-fold rise in global coal consumption per capita by 2100. Since future coal consumption is likely to remain flat or decline, that means that global carbon dioxide emissions will be "approximately in line with the medium RCP4.5, RCP6.0 and SSP2-4.5 scenarios."

For some years now, University of Colorado climate change policy researcher Roger Pielke, Jr., and his colleagues have been pointing out that the development of the global economy is highly unlikely to trace the high emissions pathways that led to the worst projected outcomes. Nevertheless, climate studies based on the RCP8.5 scenario are the ones being relied upon by people making their predictions of dire climate calamity by the end of this century.

Pielke and his colleagues have published a new study in the journal Environmental Research Letters that argues that these intermediate emissions scenarios are much more plausible than the high end scenarios that engendered fears of climate catastrophe. "These scenarios project between 2 and 3 degrees C of warming by 2100, with a median of 2.2 degrees C," they conclude. They do, however, acknowledge that "these scenarios also indicate that the world is still off track from limiting 21st-century warming to 1.5 or below 2 degrees C."

These new calculations are based on the future energy use and energy policy projections found in the International Energy Agency's latest World Energy Outlook report. That report concludes that, instead of rising six-fold, global coal consumption will peak during this decade. On the other hand, the U.S. Energy Information Administration projects that world coal consumption will continue to rise slightly through 2050, but that's still far from the sixfold increase entailed in the RCP8.5 scenario.

To assess plausibility of most of the IPCC scenarios, Pielke and his colleagues ask which of the scenarios have projected carbon dioxide emissions growth errors and divergences of less than 0.1 or 0.3 percent per year over the observed growth rates between 2005 and 2020. That is, which scenarios tracked what actually happened with carbon dioxide emissions over the last fifteen years? Next they further parse how well the scenarios similarly track actual emissions beginning in 2005 through the IEA's projections of future emissions to 2050. 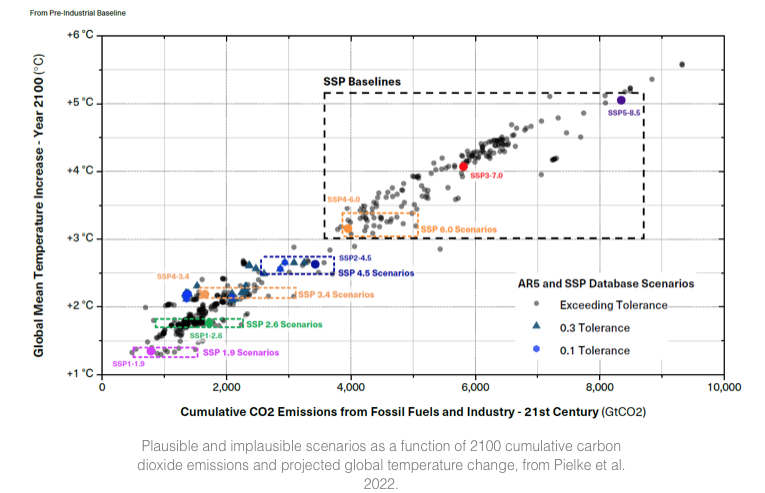 The chart above displays the plausibility of the various IPCC emissions scenarios by tracking how well they match likely cumulative emissions of carbon dioxide over the course of this century. The scenarios that closely track actual and projected IEA emissions are marked with blue dots (0.1 percent) and triangles (0.3 percent). "All of the plausible scenarios," explains Pielke in his Substack newsletter The Honest Broker, "envision less than 3 degrees Celsius total warming by 2100. In fact, the median projection is for 2100 warming of 2.2 degrees Celsius." He adds that that "is within spitting distance of the Paris Agreement goal of holding temperatures to a warming of 2.0 degrees Celsius."

So man-made global warming of 4°C by 2100 above pre-industrial levels is not a real possibility.

"Is the world ready for good news on climate?," asks Pielke. Yes, we are.