Sunday night at 6:40 p.m., parents of the Brooklyn public elementary school that I pulled my 6-year-old daughter out of this fall were informed by email that Monday's classes—the first after winter break—would not be taking place in person after all.

"We currently do not have enough staff to open the building safely," P.S. 58 Principal Katie Dello Stritto wrote. "There are many factors that have contributed to this closure. One big factor is that many of our staff members have tested positive for Covid, or are experiencing symptoms and awaiting test results. Also, staff members are home caring for their Covid positive family members. Beyond that, the remainder of our staff is not reporting to the school building tomorrow."

Parents in particular focused on that last sentence, as it hinted at what was really going on here—the teachers, like many throughout the country, staged a January 3 sick-out. "We are demanding the city and our union take these actions to stop the spread," a group of them emailed parents:

UPDATE: Teachers apparently emailed parents their list of demands for the city & union to "stop the spread," including:
* testing-to-return for all students & staff
* universal weekly testing
* "Real ventiliation fixes"
* "Short-term transition to remote learning when needed"

The omicron variant is leading to what Reason's Jacob Sullum has characterized as an "explosion" of COVID-19 cases, which, even when comparatively mild in individual impact, place tremendous collective strain on any system that congregates large numbers of people (including some unvaccinated) in the same airspace. While teachers in many places are required to be vaccinated, and the vaccine has been available to them going on one year now, only 15 percent of kids between the ages of 5 and 11 have been fully inoculated, according to the Centers for Disease Control and Prevention (CDC). The good news on that front is that the young remain comparatively impervious to serious COVID illness, as do reasonably healthy vaccinated adults.

With schools, like many categories of employers, already facing labor shortages, and with COVID testing capacity still woefully inadequate because of governmental missteps, the omicron surge presents a logistical challenge worthy of respect. So far, it's public schools in Democratic states and cities that—as has been true throughout the pandemic—have been unable to meet the challenge of staying open here in Month 22. 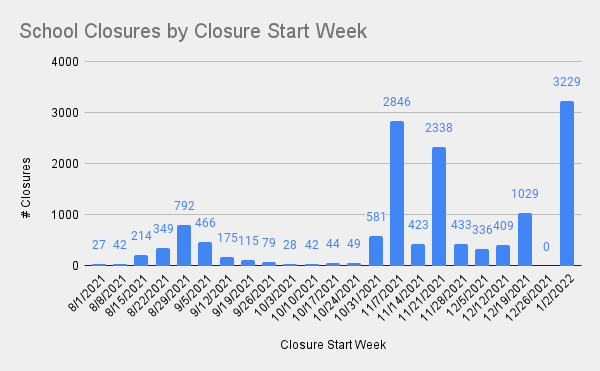 These shutdowns in some cases are occurring despite the repeated stay-the-hell-open pleas from Democratic elected officials and appointees, including President Joe Biden and Education Secretary Miguel Cardona. "The goal is full-time, in-person learning for our students," Cardona said on Fox News Sunday, pointing to the massive $130 billion the federal government has authorized for K-12 COVID relief. "They've suffered enough."

Chicago Mayor Lori Lightfoot made similar noises Monday. "What we have learned from this pandemic is that schools are the safest place for students to be: we have spent over $100 million to put mitigations in place, most…staff members are vaccinated, and we generally see little transmission in school settings," Lightfoot said in a statement. "Keeping kids safely in school where they can learn and thrive is what we should all be focused on."

But all the pro-opening rhetoric in the world isn't enough to change the reality of American public school governance, which, to a degree unusual in the rich world, is handled locally and subject to heavy influence by teachers unions, particularly in Democratic Party strongholds. The Biden administration may talk tough, but that $130 billion is already out the door, and if fully vaccinated teachers in some cities are too afraid to enter school buildings with unvaccinated students, and some of those systems have too-shallow pools of substitute teachers, then some of those buildings will be closed, regardless of what the mayor, governor, or president might say.

American Federation of Teachers (AFT) President Randi Weingarten, in between burnishing her false credentials as a champion of reopening (and/or casually implying that Republicans are latent fascists), has been making her usual "everyone wants schools open in person…but" statements, "closely monitoring" the situation in New York City, where the AFT-affiliated union tried and failed to convince new Mayor Eric Adams to delay the return of school.

Adams was emphatic Monday in pushing back against union reluctance with both hands. "The safest place for our children is a school building," the new mayor said in an appearance outside an elementary school in the Bronx, "and we are going to keep our schools open." Physical school closures and hybrid schedules from March 2020 to June 2021, Adams stressed, "traumatized parents that did not have childcare. The remote learning aspect of it was terrible for poorer communities." Conclusion: "We're not sending an unclear message of what is going to happen day to day. I'm going to tell you what's going to happen day to day. We are staying open."

So complete was the mayor's rebuke that our rogue local elementary school was quickly brought to heel, with the administration suggesting possible disciplinary action against the principal. "Thank you for continuing to partner with us as we work hard to focus on teaching and learning and ensuring we are doing so in a safe environment," Dello Stritto emailed parents Monday evening. "I am writing to inform you that our school building will be open tomorrow and ready to welcome back all of our students. We will be fully staffed with our own staff members, substitute teachers, and central staff, to support."

New York City being the largest school district in the nation, and Adams being a Democrat openly skeptical of big-city progressivism, there will be many eyes on whether he succeeds in taming unions and keeping schools open. The New York Post loves him, and Nate Silver is making wildly premature predictions about his viability as a presidential candidate, but one of three NYC public school kids did not show up to school Monday, and the city is still at or near the epicenter of omicron.

There are 3,000 other public school districts outside the five boroughs that have closed this week, even as private schools (like the one we moved our first-grader to) remain open. The Chicago vote on Tuesday will be a key moment, and Los Angeles, which has a particularly powerful teachers union, will try to open next week.

There is no doubt that keeping a large and crowded building functional during a pandemic surge is a logistical feat. But especially after the surprise November victory of Republican Governor Glenn Youngkin in Virginia, there is a pressing question on the minds of scores of millions of parents: Can Democrats keep schools open?