Reason is supported by:
Stephen Hall

D.C. Mayor Muriel Bowser must have gotten her holiday parties out of the way early. The mayor announced at a press conference today that the District would be reimposing its mask mandate for indoor public spaces Tuesday morning at 6 a.m.

This marks the third time that Bowser's administration has decided to mandate masks in public spaces. This latest masking requirement comes less than a month after the mayor repealed the last mandate, which had been imposed in late summer to deal with a surge in COVID-19 cases caused by the delta variant.

"This does not mean that everyone needs to stop wearing their mask," Bowser said at the November press conference announcing that mandate's repeal. "But it does mean we're shifting the government's response to providing you this risk-based information."

Providing people with information and then allowing them to make decisions for themselves is apparently no longer a viable option, given the surge in new cases this winter and the spread of the new omicron variant.

In response to a question about whether D.C. would consider carving out an exemption for gyms, as neighboring Virginia did when it had a mask mandate in effect, Bowser said no.

Prior to today's announcement, D.C. had been one of the few large, liberal cities to have neither a general indoor mask mandate nor vaccine requirements for public places or private-sector workers.

Rather, the District government had limited itself to requiring masks in schools, some government buildings, public transit, and rideshare vehicles. City workers, health care workers, student athletes, and staff and frequent visitors at schools were all required to be vaccinated.

That earned the city some qualified (and now clearly unearned) praise from yours truly as an island of relative pandemic sanity. I'm sorry.

With the new mask mandate in place, District diners and drinkers can look forward to the familiar ritual of putting on a mask for the few brief seconds from when they enter a bar or restaurant to when they sit down at their table. This, apparently, will keep us safe from omicron.

When D.C. imposed its last mask mandate at the end of July 2021, the city was looking at a surge in the COVID-19 cases caused by the delta variant. Despite that surge, there was effectively no discernable increase in the number of COVID-19 deaths reported in the city.

The number of reported cases in D.C. has already surpassed the peak of the last surge, according to data culled by WTOP. The number of people hospitalized with COVID-19 is roughly the same as the last peak in late September 2021. The city continues to average about one COVID-19 death per day.

Data included in the mayor's presentation today shows that during the summer/fall surge in delta cases, even the COVID-19 case rate stayed relatively low for fully vaccinated residents. 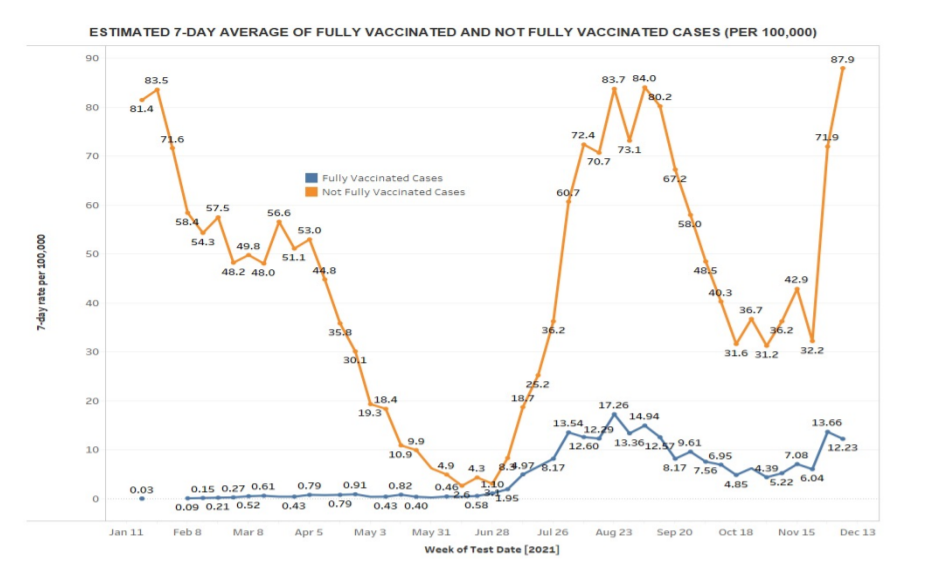 That's more evidence still that vaccines are a really great means of protecting oneself from a COVID-19 infection, let alone a severe case that could lead to hospitalization or death. Vaccines and booster shots are free and available in D.C. About 65 percent of residents have been fully vaccinated.

D.C. businesses were already free to require masks if they wished, and people could obviously wear them inside businesses if they wanted to.

Nevertheless, in order to protect people that have either already effectively protected themselves from COVID-19 or chosen not to, Bowser is requiring an even less effective public health intervention with her new mask mandate.

The mayor also announced that the city would start providing free rapid tests at select locations throughout the city, and that city employees, interns, and grantees will be required to be fully vaccinated and get a booster shot.

This new mask mandate is set to expire on January 31. We'll see if that actually happens.