In order to save the planet from catastrophic climate change, Americans will have to cut their energy use by more than 90 percent and families of four should live in housing no larger than 640 square feet. That's at least according to a team of European researchers led by University of Leeds sustainability researcher Jefim Vogel. In their new study, "Socio-economic conditions for satisfying human needs at low energy use," in Global Environmental Change, they calculate that public transportation should account for most travel. Travel should, in any case, be limited to between 3,000 to 10,000 miles per person annually.

Vogel and his colleagues set themselves the goal of figuring out how to "provide sufficient need satisfaction at much lower, ecologically sustainable levels of energy use." Referencing earlier sustainability studies they argue that human needs are sufficiently satisfied when each person has access to the energy equivalent of 7,500 kilowatt-hours (kWh) of electricity per capita. That is about how much energy the average Bolivian uses. Currently, Americans use about 80,000 kWh annually per capita. With respect to transportation and physical mobility, the average person would be limited to using the energy equivalent of 16–40 gallons of gasoline per year. People are assumed to take one short- to medium-haul airplane trip every three years or so.

In addition, food consumption per capita would vary depending on age and other conditions, but the average would be 2,100 calories per day. While just over 10 percent of the world's people are unfortunately still undernourished, the Food and Agriculture Organization reports that the daily global average food supply now stands at just under 3,000 calories per person. Each individual is allocated a new clothing allowance of nine pounds per year, and clothes may be washed 20 times annually. The good news is that everyone over age 10 is permitted a mobile phone and each household can have a laptop.

How do Vogel and his colleagues arrive at their conclusions? First, they assert that "globally, large reductions in energy use are required to limit global warming to 1.5°C."  The 1.5°C temperature increase limit they cite derives from the 2015 Paris Agreement in which signatories agreed to hold "the increase in the global average temperature to well below 2°C above pre-industrial levels and pursuing efforts to limit the temperature increase to 1.5°C above pre-industrial levels."

To achieve that goal, the researchers focus on what they call provisioning factors, which are intermediary institutions that people use to satisfy their needs. Provisioning factors that affect the amount of energy a society uses include public service, public health coverage, access to electricity and clean fuels, democratic quality, income equality, economic growth, and extractivism. These provisioning factors are the basis for providing sufficient human needs such as nourishment, drinking water, sanitation access, basic education, and a minimum income, all of which help secure the basic need of healthy life expectancy.

In order to stay below the 1.5°C temperature increase threshold, they cite earlier research that calculated that the average person should be limited to using annually as little as 18 gigajoules (equivalent to 136 gallons of gasoline or 5,000 kWh) of total energy, but allocated more generously for their study a cap of 27 gigajoules (equivalent to 204 gallons of gasoline or 7,500 kWh) annually. They then checked to see if any country in the world had met their definition of decent living standards using that amount of energy per capita. "No country in the world accomplishes that – not even close," admitted Vogel in an accompanying press release. 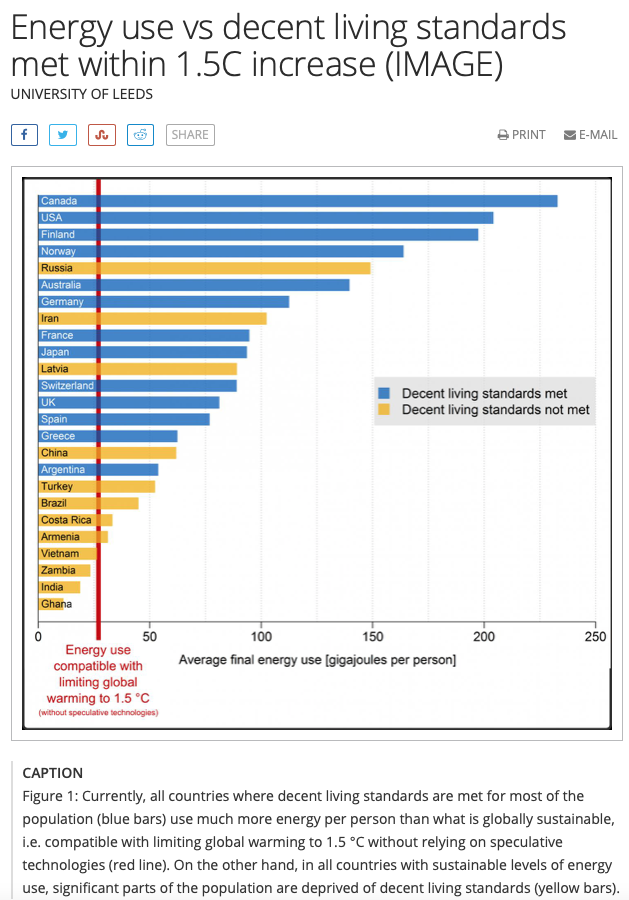 Vogel and his colleagues are undaunted by the fact that there are absolutely no examples of low-energy societies providing decent living standards—as defined by the researchers themselves—for their citizens. So they proceed to jigger the various provisioning factors until they find that what is really needed is a "more fundamental transformation of the political-economic regime." That fundamental transformation includes free government-provided high-quality public services in areas such as health, education, and public transport.

"We also found that a fairer income distribution is crucial for achieving decent living standards at low energy use," said co-author Daniel O'Neill, from Leeds' School of Earth and Environment. "To reduce existing income disparities, governments could raise minimum wages, provide a Universal Basic Income, and introduce a maximum income level. We also need much higher taxes on high incomes, and lower taxes on low incomes."

Two things that humanity for sure doesn't need according to the study are economic growth or the continued extraction of natural resources such as oil, coal, gas, or minerals. Vogel concluded: "In short, we need to abandon economic growth in affluent countries, scale back resource extraction, and prioritize public services, basic infrastructures and fair income distributions everywhere." He added, "In my view, the most promising and integral vision for the required transformation is the idea of degrowth – it is an idea whose time has come."

The researchers' assertion that "large reductions in energy use are required" is actually a non sequitur because it is not energy use per se that is contributing to man-made global warming, but the emissions of carbon dioxide associated with the burning of fossil fuels. In fact, when they set their 27-gigajoule per capita threshold, they specifically ruled out "speculative" technological progress. However, transitioning to no-carbon energy sources such as nuclear, wind, and solar power would solve the problem without forcing humanity to go on the ridiculously strict energy diet they call for.

Founder of the ecomodernist Breakthrough Institute Ted Nordhaus was correct when he argued, "The utopian dreams of those who wish to radically reorganize the world to stop climate change are not a plausible global future." The far better course for addressing the problem of climate change (and many others) is for humanity to aim for a high-energy planet. Instead of energy abstinence and degrowth, ecomodernists call for a "massive expansion of energy systems, primarily carried out in the rapidly urbanizing global South, in combination with the rapid acceleration of clean energy innovation."

Developing a high-energy planet will spur economic growth and innovation, helping to provide for all of the human needs that concern Vogel and his colleagues. Instead of trying to force Americans to live on the amount of energy currently available to Bolivians, the goal should be to enable people in energy-starved poor countries to gain access to energy supplies currently enjoyed by average Americans.

Disclosure: I have had the pleasure of attending several Breakthrough Dialogues and participating in discussions where I made the case that supporters of free markets are natural ecomodernists.

Katherine Mangu-Ward | From the March 2023 issue

Scott Shackford | From the March 2023 issue