American women are choosing to have fewer babies and the result is that America's total fertility rate in 2020 has fallen to a record low of 1.64 births per 1,000 women between 15 and 44 years of age, according to the Centers for Disease Control and Prevention. Demographers define replacement fertility as 2.1 children per woman over the course of her lifetime; one to replace her, another to replace the father, and a tenth extra to account for children who die before reproducing and those who churlishly refuse to make their parents into grandparents. Populations with sustained sub-replacement fertility will eventually begin to shrink. 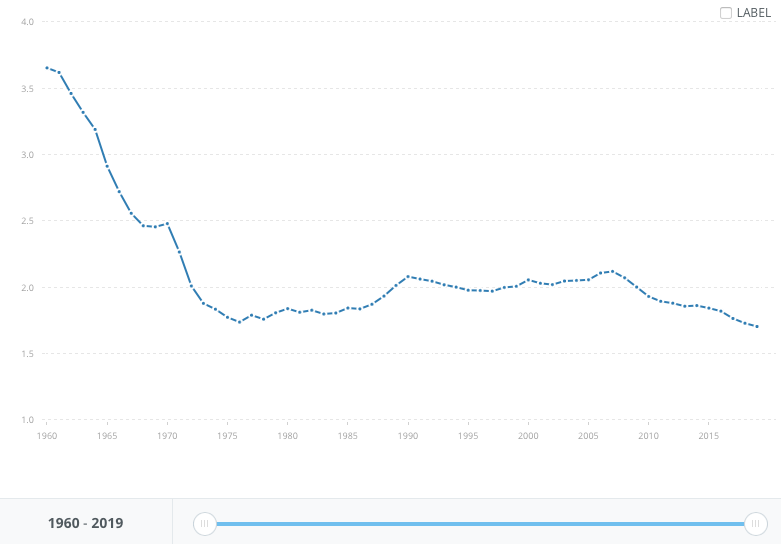 As recently as 60 years ago, the average American woman gave birth to 3.6 kids during her lifetime. Following the introduction of effective birth control pills, the U.S. total fertility rate began to fall steeply from 1960 to a nadir of 1.74 children per woman in 1976. Fertility rose again to hover just below replacement until 2007 when it began its contemporary drop to the lowest rate ever recorded. The U.S. fertility rate is now basically the same as that of other rich developed countries.

A week ago, the U.S. Census Bureau reported that in the prior decade the U.S. population grew by only 7.4 percent from 309 million to 331 million people. That is the second-lowest rate in the country's history; the only decade with a lower growth rate (7.3 percent) was during the Great Depression in the 1930s. 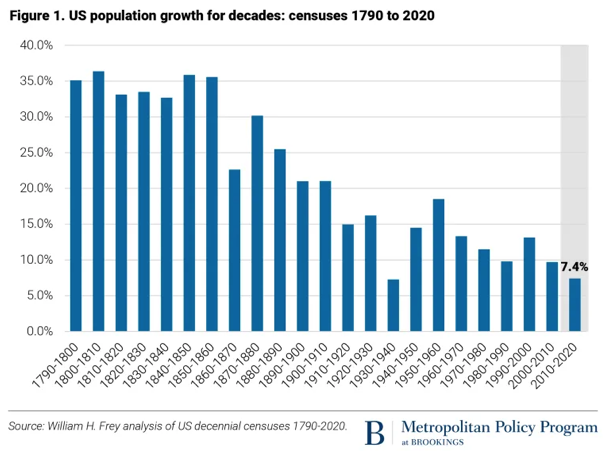 Naturally, the falling fertility rate has provoked a lot of handwringing, including worries that the pressures and precarity of "late capitalism" are discouraging would-be parents from having the number of children that they would actually prefer to have.

There are good reasons to doubt that, as American Enterprise Institute's Scott Winship reported recently over at The Dispatch. Comparing the fertility intentions collected in the National Longitudinal Survey of Youth's 1979 and 1997 datasets, Winship, the director of poverty studies at AEI, finds that in both cohorts, about 25 percent of the women fell more than one child short of their expressed expectations as young adults. The big difference is that in 1979, some 84 percent of the women respondents expected two or more children; in 1997, only 73 percent did.

As I argued earlier, modernity offers people a multitude of life options that compete with the bearing and rearing of children. Evidently, the trade-offs between work, travel, socializing, entertainment, sports, and parenting that people are making reduce fertility. The upshot is that modern people considering their options are voluntarily choosing to have fewer children. Freedom of choice is a good thing.