C. and I arrive at Justice Center in downtown Portland on Saturday a little after 11 a.m. Unlike the night demonstrations, in which protesters pelt police headquarters with fireworks and flaming trash, the few dozen people this morning are waving American flags and shouting, "Blue lives matter!"

Which is not popular with the crew across the street, who shout back "ALL COPS ARE BASTARDS!" and that all cops must die.

Even the good ones?

"There are no good ones," an Ojibwe boy wearing a medicine pouch tells me.

He cannot name an instance where a police officer has done good for someone?

"You need to step six feet away from him," a kid at the curb tells me—and, regarding my question about the police, "I am going to totally KICK YOUR ASS!"

So good morning from Day 87 of the protests in Portland, Oregon. This one is a little different: It's organized by Back the Blue, a group showing its support for police, support that includes a caravan of Trump-supporting motorcyclists who roar up and form a barrier between the opposing sides.

"All cops are brave!"

"Especially when they're wearing white hoods!"

"God, what a mess," says what looks to be a homeless dude, just before he wings a full water bottle at the flag-wavers.

"The Proud Boys are 100 deep and on their way in, on the MAX [light rail] train," says C. She's referring to the alt-right group behind today's "No to Marxism in America Rally," planned for noon. Last year's meet between the Proud Boys and antifa resulted in just about zero face time, in part because Portland police coordinated with various factions to keep the groups apart.

Things are different this year. Though the action is taking place directly in front of police headquarters, there is not, for the length of today's confrontation, one officer in evidence. Instead, there's a message through a bullhorn several times an hour, "This is the Portland Police Bureau. Our priority is the preservation of life and the protection of everyone's First Amendment [right] to speech… We recognize there are groups with different views gathered here today…"

The message's coda, to "Stop participating in criminal activity," does nothing to stop the anti-cop side from throwing eggs, throwing rocks, and shooting fireworks across the street. They are primed to fight, and they've been practicing every night since late May. The movement has grown from grief and outrage over the killing of George Floyd to demands for the abolition of all police and all forms of what it considers state-sponsored oppression.

The oppressors now appear to include anyone inside their homes at night. For two months the protests—which during that time were mainly protests, with people of all stripes and ages marching in relative peace for the cause of Black Lives Matter—were in the main held at the courthouse blocks where we are today. But the dynamic has now changed. Each night, usually at 8 p.m., the black bloc—the by-any-means-necessary wing of the movement, named for their all-black clothes—meet at a park somewhere in the city and march to the closest institution they deem problematic (police stations, social services buildings), which are graffitied, set on fire, pelted with trash and sometimes feces. Last week they added a new twist, marching through residential streets late at night and shining lights into people's homes, demanding they wake up, that they get "out of the house and into the streets!" These nightly campaigns take place citywide; residents have no idea if or when it will come down their block, which does not make for a peaceful night's sleep.

"I feel, as a community member—we came from East Portland, Cherry Park neighborhood—and as one of many mothers in that neighborhood, we want to see the violence and the rioting end," says Christa, a petite woman standing next to a stroller holding her three children, ages four and under. "We want the city council to make a stand, to make some tough calls. We believe in peaceful protest and Black Lives Matter and all these issues. We do not agree with the collateral damage that is happening to our city. We love Portland and downtown is being ravaged by the ongoing riots; businesses are going out of business. It's just very frustrating."

She holds over her head a sign that reads "WHEELER/HARDESTY—DO SOMETHING!" What does she think Mayor Ted Wheeler and Councilmember Jo Ann Hardesty should do?

"Hardesty needs to step up and support the police doing their job," she says. "People have the absolute First Amendment constitutional right to protest. They do not have the right to destroy property or assault individuals."

Christa is drowned out by the canned police announcement asking people to stop antagonizing each other.

"Right. 'Stop criminal behavior,'" she says. "The problem is, the district attorney refuses to prosecute once they're arrested. In essence, they're promoting ongoing violence by not having any consequences."

Would it be better if the police had a presence here today?

"Honestly? If the police were out here right now, it would just escalate the situation," Christa says. "When you have such a polarized issue, anything can add fodder. The police show up, this could very well turn into a violent situation."

It's already a violent situation: Proud Boys and black bloc screaming in each other's faces, golf balls and eggs being launched, pepper spray and smoke bombs making everyone cough, and the kid who promised to kick my ass whacking the sidewalk with a thick six-foot pole.

"This is the Portland Police Bureau….We recognize there are groups with different views gathered here today…"

"It's a testament to the passivity of Portlanders that someone hasn't gotten shot," says Kevin. Right, I tell him. Portland is not Pocatello, or Chicago. If someone is eventually shot by, say, someone who feels their home is under threat, the protesters will then have a martyr, who will be held up as proof of a racist system. It's a bit of a finger trap, really.

"And exactly their plan," he says. "For people who claim to be anti-fascist, they're awfully fascist in their tactics."

"I don't like you," a man I have never met tells me. "You spread propaganda."

"Don't deny it, I've watched hours and hours of you online," he says. When I press him for these propagandistic details, he spends 10 minutes telling me he doesn't know exactly but doesn't need to know to know I am an enemy. He then galumphs toward the black bloc side, and I think how it makes sense for him to join a movement where he can feel integral without having to substantiate his reasoning, where the cost of membership is hating the people he is told to hate. As I watch him become subsumed by the crowd, another unidentifiable figure in black, I see him as no part revolutionary, more a meat-sack of insecurity.

I've encountered black bloc activists who, when alone, fold like a cheap suit, and also those who want to talk one on one, to maybe find a way toward progress together. This is not what is happening today.

A painter who's told me he paints the demonstrations because "they need to be captured in a medium other than film" gets a face-full of bear mace. A black bloc "medic" rinses his eyes with milk of magnesia. Five minutes later, C. pukes from the pepper gas. 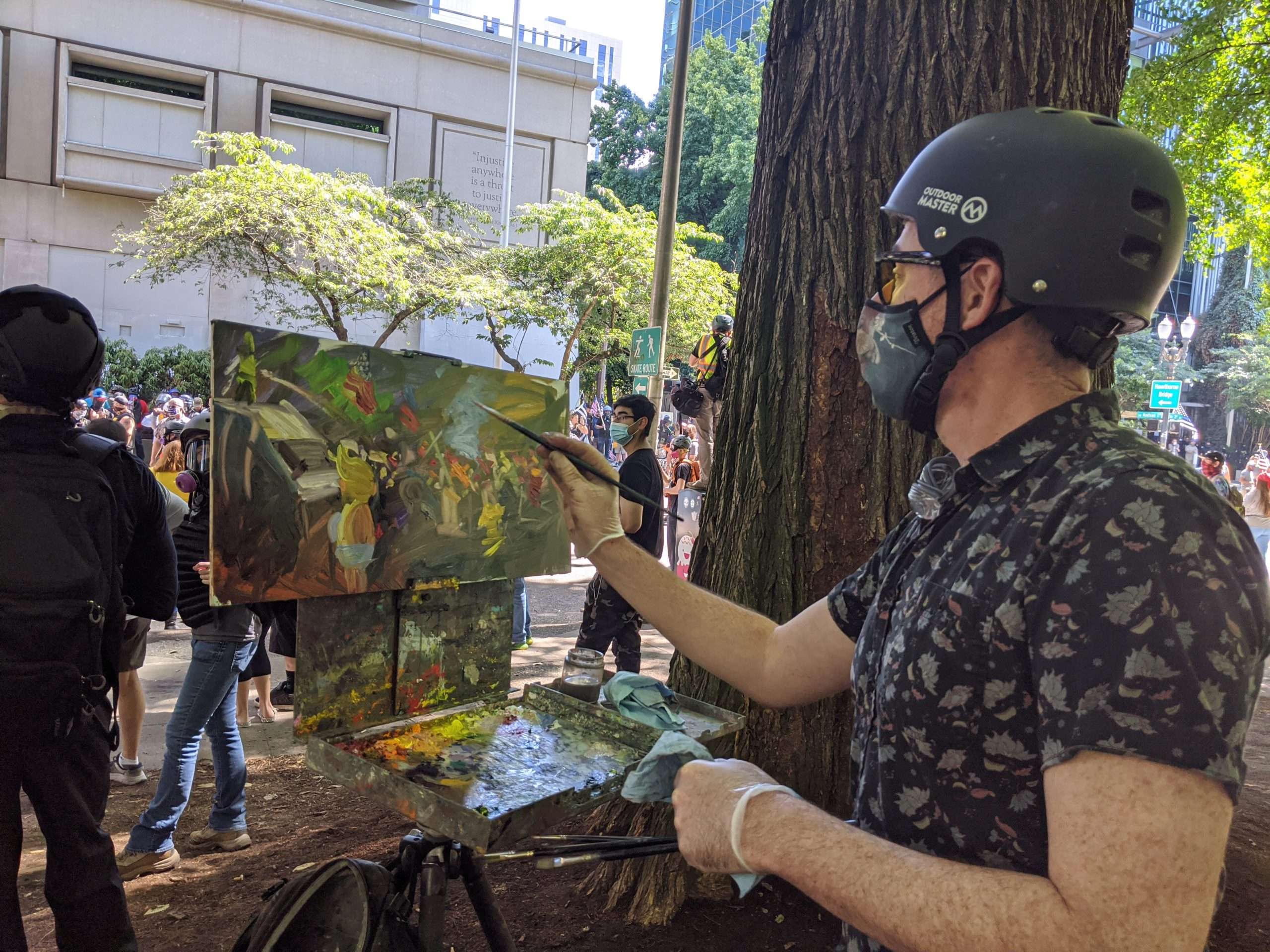 To quote the homeless guy: What a mess.

"And it's not going to stop until the mayor and the governor let us do our jobs," a Portland police officer later tells me. Which neither have been inclined to do, framing the protests as peaceful when they visibly and exponentially are not.

What, I ask the officer, will it take for the nightly demonstrations to stop?

Maybe violence, he says. "You have a 24-year-old white kid who lives in his mother's basement get hit upside the head? He's not going to come out the next night."

The violence right now is not being doled out by the absent police, nor by the Proud Boys, who a little after 2 p.m. have started to march south. The black bloc contingent, which grew considerably as the afternoon wore on, follows close behind. Tom Petty's "I Won't Back Down" plays as the Proud Boys are pursued through the empty streets of downtown. A dozen young people in black run up the ramps of the Unitus Plaza building, looking like cat burglars, looking to cut off the Proud Boys, to continue the fight. What else are they going to do in a COVID-closed city on a Saturday night?

But the Proud Boys have apparently ditched, heading not into the streets but directly to the MAX train. There will be no more fight with them tonight.

There will, apparently, be a little more pepper spray.

"I can't open it," says a young woman, her eyes shut and streaming tears as she holds a bag of eye wipes. Two blocks later, C. and I minister to another girl similarly blinded.

"I used to love this city. I used to love waking up and knowing I lived here," says C., as we walk past people cheering and sloganeering in the park across from Justice Center. "Now I just feel bad. Not for Portlanders. For Portland."

What will the park crew do on a Saturday night? What they do every night, which is take to the streets, maybe your street. They will tell you, via the same six or seven slogans, that if you are not with them, you're against them. They will call it love for their fellow man. They will claim they are righting historical wrongs, and who but a monster or a racist would object to that? They will call the destruction of property free speech, and average citizens, out of fear or confusion or not wanting to be seen as a monster or a racist (because who knows what terrors that might bring?) will say nothing, or squint hard enough to think yes, yes, it all makes sense, better to be with them than against them; better, maybe, to burn it all down.

L.A. Schools Will Require Non-Cloth Masks (Even for Sports) and Vaccination Next Year