If the Internet is akin to the Wild West, as many have suggested, Twitter is, perhaps, the shooting gallery, where verbal gunslingers engage in prolonged hyperbolic crossfire. It is in this context of battle by tweet that the conduct at issue in this defamation case was born.

Plaintiff Charles Ganske, a journalist, alleges that Defendant Louise Daphne Mensch, a blogger and former member of Britain's Parliament, defamed him and interfered with his employment as a result of a tweet that she posted on July 27, 2018 at 12:32 a.m. (the "Tweet"). Plaintiff alleges that Defendant's single Tweet, which "interjected" herself into an ongoing conversation between Plaintiff and a third party, who called himself @Conspirator0, contained numerous defamatory statements…. Because the Court concludes that the allegedly defamatory statements in Defendant's Tweet are nonactionable statements of opinion, [Mensch's motion to dismiss] is granted….

Plaintiff is a 37-year old journalist. From 2005 to 2007, "[a]s part of his job, he edited a website, www.russiablog.org, wrote press releases, authored op-eds, and assisted in drafting fundraiser letters and grant applications." After a hiatus from journalism, Plaintiff returned in March 2011 to work "as [the] Central Region Broadcast News Editor for the Associated Press ('AP') in Chicago, Illinois." From 2016 to 2018, still at the AP, Plaintiff served as the "National Sports Broadcast Editor" and the "Social Media/UGC specialist in Chicago."…

Defendant Mensch is a former member of Britain's Parliament and editor of Heat Street, "a 'news' site." Defendant is now "a full-time blogger" and "maintains and operates multiple Twitter accounts, including @LouiseBagshawe (suspended), @LouiseMensch, and @patribotics." Plaintiff asserts that "Mensch was one of the propagandists who, for over two years, heavily promoted the now completely debunked Russia collusion hoax" and that she "trolls Twitter and claims to expose 'Russian' influence on and off the platform." …

On July 27, 2018, "Mensch came across the conversation (thread) between Ganske and @Conspirator0, and interjected herself." This litigation stems from Defendant's Tweet at 12:32 a.m. that day, sent from her @patribotics account: 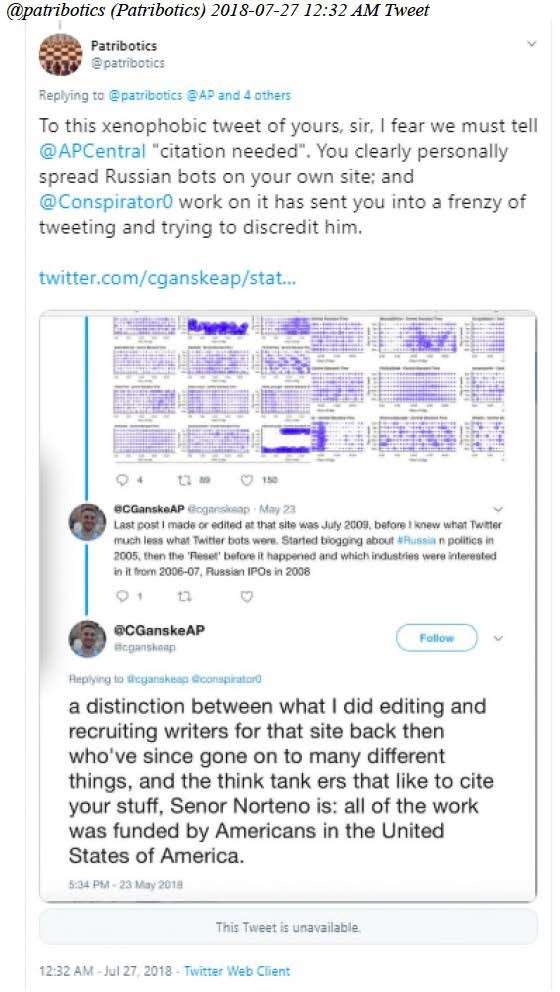 Plaintiff alleges that this Tweet contains "false and defamatory statements about [him]" because neither he nor his tweets were "xenophobic"; he "never spread Russian bots on any website"; "Russiablog.org was never [his] 'own' website"; and he "had no 'vendetta' or 'obsession' with anyone." Plaintiff further claims that Defendant "deliberately tagged [Plaintiff's] employer, '@AP,' and published the tweet to '@APCentral' in order to interfere with and prejudice Plaintiff in his employment and get Plaintiff fired." 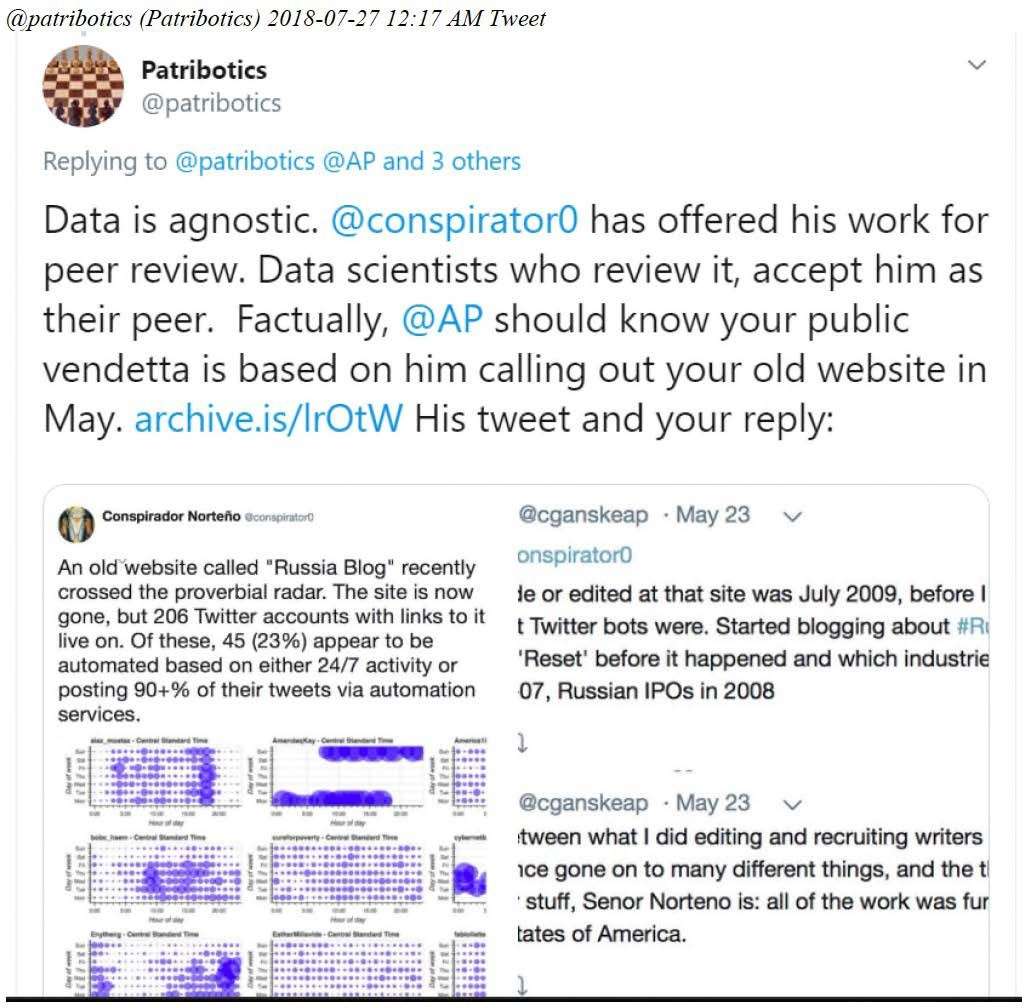 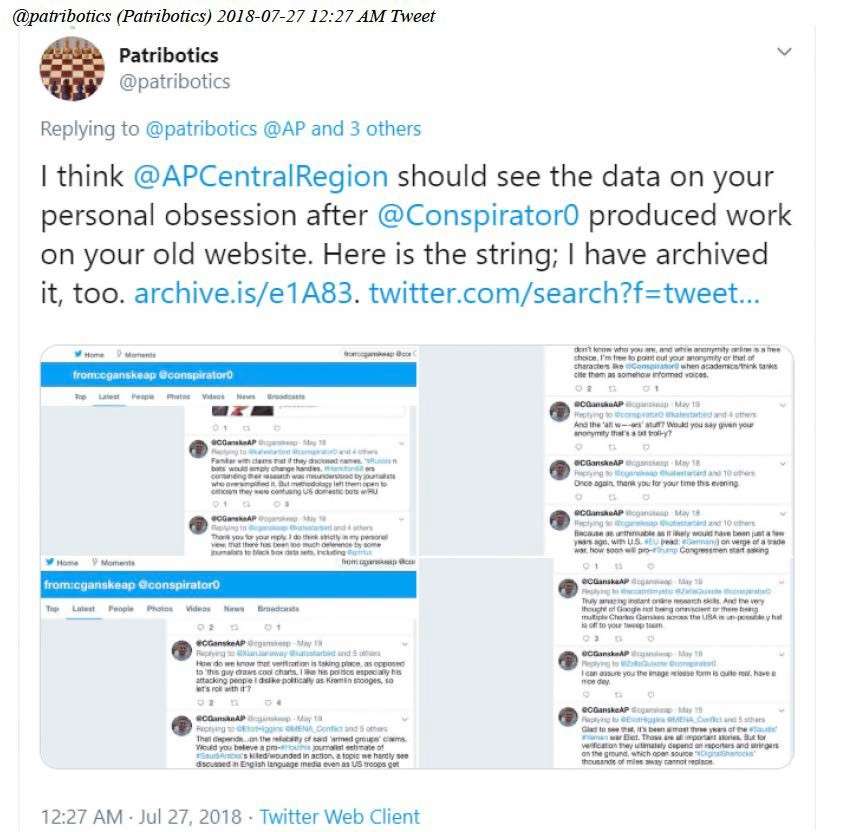 After seeing Defendant's Tweet, "Ganske notified the AP that he was being subjected to targeted harassment by Mensch." In response, "AP's Social Media director, Eric Carvin, did not suggest to Ganske that he had done anything on Twitter to violate the AP's Social Media Policy." Nonetheless, on August 10, 2018, Ganske's employment was terminated, purportedly "because of Mensch's tweets." …

To assist with distinguishing between a statement of fact and opinion, New York courts look to three factors:

(1) whether the specific language in issue has a precise meaning which is readily understood; (2) whether the statements are capable of being proven true or false; (3) whether either the full context of the communication in which the statement appears or the broader social context and surrounding circumstances are such as to signal readers or listeners that what is being read or heard is likely to be opinion, not fact.

The Court's analysis here thus focuses on whether the Tweet included "a provable statement of fact," which — unlike a "statement[] of opinion" or a "[l]oose, figurative or hyperbolic statement[]" — can be "actionable as defamation."

Although Plaintiff does not specifically address this issue, the Court first considers whether the statement that Plaintiff's tweet was "xenophobic" is one of fact or opinion.

In analyzing the unique context of statements made on Internet fora, courts have emphasized the generally informal and unedited nature of these communications. This context, as some courts have concluded, leads "readers [to] give less credence to allegedly defamatory remarks published on the Internet than to similar remarks made in other contexts." Like the other Internet fora discussed in the above-cited cases, Twitter's forum is equally — if not more

— informal and "freewheeling." As such, the fact that Defendant's allegedly defamatory statement that Plaintiff's tweet was "xenophobic," appeared on Twitter conveys a strong signal to a reasonable reader that this was Defendant's opinion.

In addition to context, the Court must also consider the other factors: whether Defendant's comment that Plaintiff's tweet was "xenophobic" lacks "a precise meaning which is readily understood" or is "capable of being proven true or false." Although the term "xenophobic" does have a fairly clear meaning in the context of the Tweet, it is not capable of being proven true or false. It is, rather, classic opinion that amounts to an "epithet[], fiery rhetoric, [and] hyperbole," which "signal[s] advocacy" and a partisan viewpoint. Defendant's comment, moreover, was a direct response to Plaintiff's earlier tweet, which referred to @Consiprator0 as "Senor Norteno" and insisted that "all of the work [for Russia Blog] was funded by Americans in the United States of America." Plaintiff's use of the word "Senor" and heavy emphasis on America and Americans further supports the conclusion that Defendant's statement that Plaintiff's tweet was "xenophobic" was a reaction to — and personal opinion about — Plaintiff's own words.

Furthermore, the term "xenophobic" is, at a minimum, analogous to — if not, more "fiery rhetoric" than — other words that courts in this district have found to constitute "'rhetorical hyperbole' and 'imaginative expression' that is typically understood as a statement of opinion." See Small Bus. Bodyguard Inc. v. House of Moxie, Inc., 230 F. Supp. 3d 290, 312 (S.D.N.Y. 2017) (concluding that stating that the plaintiff "engaged in 'extortion, manipulation, fraud, and deceit'" is a "a vague statement … of the 'loose, figurative, or hyperbolic' sort that is not actionable for defamation"); Biro, 883 F. Supp. 2d at 463 (holding that "the use of the terms 'shyster,' 'con man,' and finding an 'easy mark' is the type of rhetorical hyperbole and 'imaginative expression' that is typically understood as a statement of opinion"); Egiazaryan, 880 F. Supp. 2d at 507 (finding the reference to the plaintiff as "anti-Semitic and anti-American" in a "hyperbole-laden opinion piece" not to be actionable); Old Dominion Branch No. 496 v. Austin, 418 U.S. 264, 284 (1974) ("The … use of words like 'traitor' cannot be construed as representations of fact."); Chau, 771 F.3d at 129 ("[T]he epithets … 'sucker,' 'fool,' 'frontman,' 'industrial waste,' … and 'crooks or morons' … are hyperbole and therefore not actionable opinion."). A reasonable reader would likely view Defendant's reference to Plaintiff's tweet as "xenophobic" to be her opinion and not conveying any objective facts about Plaintiff….

The inclusion of the hyperlink is particularly significant. Several courts have determined that the inclusion of a hyperlink to a report or article in a communication shared on an Internet forum is a sufficient means of disclosing a factual basis on which an opinion rests. As Judge Oetken explained in Adelson v. Harris, "the hyperlink connects one to the source of the [person's] claims." The hyperlink, Judge Oetken further noted, has become "the twenty-first century equivalent of the footnote for the purposes of attribution in defamation law, because it has become a well-recognized means for an author or the Internet to attribute a source." …

Defendant both referenced and hyperlinked to the data on which her opinion that Plaintiff "clearly personally spread Russian bots on [his] own site" was grounded. Accordingly, this statement is also not actionable.

The Court similarly rejects Plaintiff's claim of defamation with regard to the third portion of Defendant's Tweet — that "@Conspirator0['s] work on [the issue of bot activity on Russia Blog] has sent [Plaintiff] into a frenzy of tweeting and trying to discredit him." For the reasons noted above, this statement is a clear-cut one of opinion, posted on Twitter and, notably, "interjected" into "the conversation (thread) between Ganske and @Conspirator0."

It is difficult to conjure a "precise meaning" for the statement that Plaintiff was "sent … into a frenzy of tweeting." Indeed, Twitter limits a user's tweet to 140 characters, which thus encourages users to post multiple times in a short period. It is common, therefore, for a user to post many times in a row. Moreover, even if this statement could be construed as one of fact with a precise meaning, Plaintiff has not alleged how this statement is defamatory in nature.

Because all three of the allegedly defamatory statements in Defendant's Tweet are nonactionable statements of opinion, Plaintiff's defamation claim is dismissed as a matter of law.

Seems right to me.

SCOTUS Could Use More Skeptics Like Amy Coney Barrett

Trump Pushed To Condemn White Nationalist Proud Boys, Instead Tells Them 'Stand Back and Stand By'