The Libertarian Party plans to choose its presidential nominee tomorrow. The process will take place online, thanks to the coronavirus, so this weekend C-SPAN addicts will be denied the pleasure of watching live as delegates meet in person to discuss the finer points of their platform.

Fortunately, C-SPAN's website includes hundreds of hours of old programming. And deep in those archives, you'll find one of the more entertaining blips in Libertarian Party history: a debate over whether the law should allow the private ownership of nuclear weapons.

I can't embed the video, but you can view it here. It was shot in Chicago in 1991, at the convention that picked the former Alaska state legislator Andre Marrou as the Libertarian candidate for president. (In those days, the Libertarian Party nominated its slate a year before the major parties did.) The delegates were considering a revamped version of the platform's anti-gun-control plank, and the debate had mostly dealt with minor matters of how certain sentences should be worded. Then a fellow from New Hampshire rose to propose an amendment: "We advocate the right of all private citizens to own any weapon or device which any government agency possesses."

The crowd greeted this with a mixture of applause and laughter. Someone seconded it, and then the formal debate began. 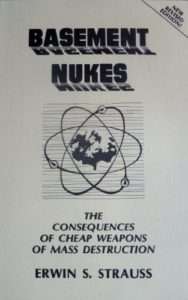 At one end of the spectrum was an Indiana delegate who felt that "given the current state—the police state—it makes no sense" for the federal government to have better weapons than the taxpayers. At the other end was Ed Clark, the party's presidential nominee in 1980, who argued that civilized people should favor the abolition of nuclear weapons, not their more widespread ownership. One man made the rather reasonable point that there's a difference between weapons that can be targeted at specific aggressors and weapons that by their nature hurt innocent civilians. Some folks didn't bother weighing in on whether the plank was philosophically sound, instead pointing out that the party's candidates would probably prefer not to deal with press queries about private nukes.

But the key moment of the debate—the comment that seemed to sum up thousands of intra-libertarian ideological battles—came about two minutes into the discussion, when a delegate rose to speak in favor of the amendment. "I think it's an absolutely abhorrent idea," he said, "but it is consistent."

The economist Clifford Thies eventually found a way to split the baby, offering some substitute language calibrated to appeal both to voters who dreamed of owning their own WMDs and voters who would ban the bomb: "Any weapon denied individuals should likewise be denied governments." This attracted some opposition from a delegate who felt it implied support for unilateral disarmament, but the assembled body liked it enough to make it, rather than the original amendment, the language being considered by the floor.

And then, having defeated the first proposal, they voted down Thies's replacement as well. The finished platform did not address the private ownership of nukes and nerve gas. That's the Libertarian Party for you: not radical enough to please the purists, but still willing to put them on national television.