A just-reported Chinese study compares the clinical outcomes of COVID-19 patients treated with hydroxychloroquine with those of patients receiving standard of care. The results, alas, are disappointing.

I summarized that study in my roundup yesterday of COVID-19 therapeutic research, pointing out that this randomized controlled trial of 150 patients "found no difference in the rate of viral load reduction or symptom alleviation between the group treated with hydroxychloroquine and the one that had not been." Now the University of Vermont pulmonologist Josh Farkas has published his own analysis of the results, delving more deeply into the data.

The patients in both arms of the study were well-matched demographically and clinically, Farkas notes. Most suffered relatively mild cases of the disease, and treatment was initiated fairly late—about 16 to 17 days after disease onset. Twenty-eight days into the trial, the researchers found essentially no difference between the two cohorts with respect to the percent of patients in which the virus was undetectable. 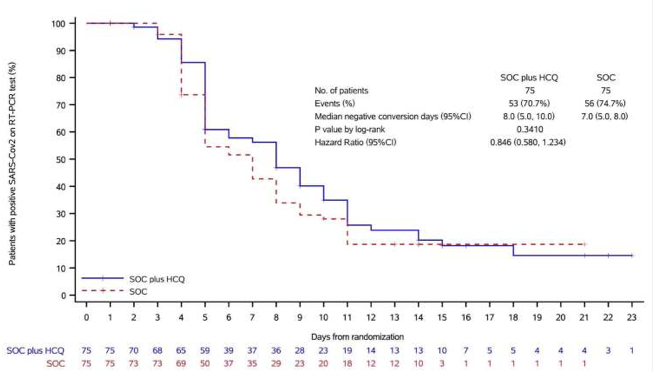 This endpoint most directly addresses the question: does hydroxychloroquine exert anti-viral activity in vivo? The answer seems to be: nope. Even if the drug were administered too late to affect the clinical course of the infection, if it exerted any anti-viral activity then we might expect to see that effect here. If anything, there might be a trend towards delayed viral clearance in patients treated with hydroxychloroquine.

The study also found that fever and respiratory symptoms did not abate any faster in patients who had been treated with hydroxychloroquine.

Farkas acknowledges the study's limits, including its small size and that the researchers were not blinded—that is, they knew which patients were being given the treatment. "Nonetheless," he says, "this study currently represents the highest available quality of evidence regarding hydroxychloroquine."