Che Guevara was many things: a bloodthirsty executioner, a propagandist, an admirer of mass murderer Mao Zedong. But he was not a big fan of the Enlightenment philosopher John Locke, whose support for the rights to life, liberty, and property helped inspire the American Revolution.

Curiously, the curriculum company Flocabulary—best known for producing educational rap videos that teach history, vocabulary, and other subjects—thinks Guevara's a great example of Locke's influence and that students of all ages should know about it.

A parent of students enrolled in Alexandria City Public Schools in Alexandria, Virginia, has passed along a sample quiz question from one of Flocabulary's units on the American Revolution. The unit, intended for grades 5–12, purports to teach kids about Locke and how his ideas inspired Thomas Jefferson and the American founding. Much of the content is fine, though the accompanying rap begins like this:

I'm the thinker with theories 'bout the government
Got the Enlightenment on lock because I'm running it
You wannabe Beyonces—change your clothes
I wrote down thoughts and I changed the globe.

The Locke rap also includes the lyric "I advocate revolution like Che." And drawing a connection between Locke and Che turns out the be an idiosyncratic focus of the unit. Take a look at this bizarre reading section: 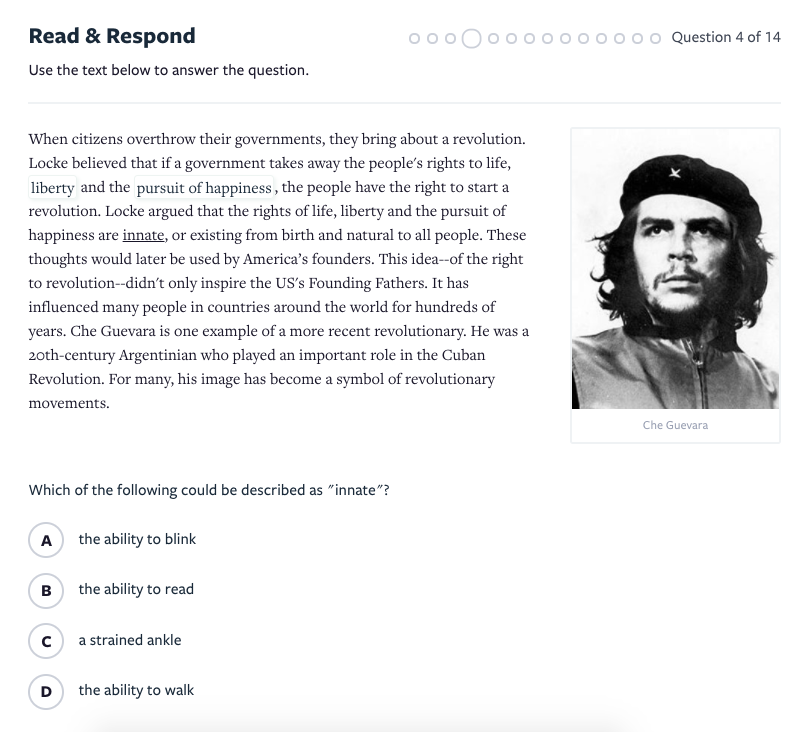 Where to begin? The reading implies that Locke's thinking inspired Guevara's revolutionary activities in South America and Africa, but there's no evidence this is the case. Che's revolution was based on Marxist-Leninism, and when he spoke about liberty he did not mean it in any Lockean sense.

Sadly, this sloppiness is characteristic of most—not all, but most—of the questions. Minor typos and awkward wording abound. Several items are duplicative. A few are so vastly superior to the others (an item about James Madison, for instance, is perfectly fine) that they must have been written by someone else.

I don't intend to characterize the company's entire curriculum based on one unit, but this unit was quite unimpressive. I realize that many lefties like Che Guevara: Frustratingly, his violent fanaticism is often overlooked by his T-shirt-wearing fans. But he's hardly a compelling illustration of the ideas of John Locke.

A spokesperson for Flocabulary did not immediately respond to a request for comment.