A State of the Union Address during the middle of an impeachment trial? How unprecedented is that? Not at all, turns out.

Twenty years and two weeks ago, about halfway through a monthlong Senate trial that would end with two verdicts of not guilty, President Bill Clinton strode like a gladiator into a joint session of Congress and unfurled an almost comically triumphalist 78-minute stemwinder to near-constant applause.

Craziest of all? He didn't even mention impeachment. It really was the damndest thing. "That year," Clinton speechwriter Michael Waldman recently recalled, "the State of the Union was…weird."

From Clinton to Ronald Reagan to Richard Nixon, Donald Trump's predecessors have had their big nights dogged by various scandals and tribulations, to which they variously responded with defiance, contrition, or gleeful disregard.

Knowing what we know about Trump's rhetorical style, we can guess he probably won't pull a 1999 Bubba on Tuesday night. But seeing how the other presidents handled adversity is an interesting benchmark, and may just remind us of the gravity and/or fleeting nature of some of America's noisiest White House scandals.

Scandal: Known as the "Lewinsky Affair," because the entire impeachment case stemmed from a sexual relationship Clinton had (and subsequently lied about) with 22-year-old White House intern Monica Lewinsky. Independent counsel Kenneth Starr, seen more recently defending Trump against impeachment, originally started investigating the president in 1994 over a suspicious-looking real estate deal Bill and Hillary Clinton had negotiated with the Whitewater Development Corporation before they moved to Washington. Clinton was charged by the House of Representatives with perjury and obstruction of justice.

Timing: Halfway through the Senate trial.

Referencing the Unpleasantness: He…just didn't. Instead, it was a never-ending list of un-humble brags and ridiculously specific micro-programs. About as close as Clinton got to acknowledging the elephant in the room was this clever high-road bit at the end:

We must all be profoundly grateful for the magnificent achievement of our forebears in this century. Yet perhaps, in the daily press of events, in the clash of controversy, we don't see our own time for what it truly is, a new dawn for America.

A hundred years from tonight, another American president will stand in this place and report on the state of the Union. He—or she—he or she will look back on a 21st century shaped in so many ways by the decisions we make here and now. So let it be said of us then that we were thinking not only of our time but of their time, that we reached as high as our ideals, that we put aside our divisions and found a new hour of healing and hopefulness, that we joined together to serve and strengthen the land we love.

How'd That One Go?: Sorry, can't hear you; too busy sobbing.

Other Retrospective LOLs: "We also must be ready for the 21st century from its very first moment, by solving the so-called Y2K computer problem…[We need] to make sure that this Y2K computer bug will be remembered as the last headache of the 20th century, not the first crisis of the 21st."

Random Storm Cloud: "For nearly a decade, Iraq has defied its obligations to destroy its weapons of terror and the missiles to deliver them. America will continue to contain Saddam, and we will work for the day when Iraq has a government worthy of its people." 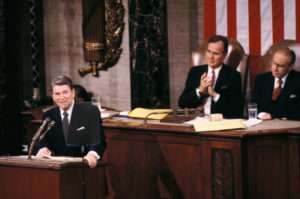 Scandal: The Iran-Contra Affair, in which administration officials secretly sold arms to Iran as part of an attempt to free seven U.S. hostages in Lebanon, and used the proceeds to secretly fund the opposition Contras in Nicaragua. All such actions had been explicitly prohibited by Congress. The various investigations would eventually lead to 11 convictions, though most were either vacated or resulted in their perpetrators being pardoned. Reagan's involvement is a source of speculation to this day.

Timing: The scandal had broken November 3, 1986; Reagan appointed John Tower to lead an investigative commission three weeks later, and Congress on January 7 had launched a special committee to look into the scheme.

Referencing the Unpleasantness: Qualified contrition, with a dash of defiance:

But though we've made much progress, I have one major regret: I took a risk with regard to our action in Iran. It did not work, and for that I assume full responsibility. The goals were worthy. I do not believe it was wrong to try to establish contacts with a country of strategic importance or to try to save lives. And certainly it was not wrong to try to secure freedom for our citizens held in barbaric captivity. But we did not achieve what we wished, and serious mistakes were made in trying to do so. We will get to the bottom of this, and I will take whatever action is called for. But in debating the past, we must not deny ourselves the successes of the future. Let it never be said of this generation of Americans that we became so obsessed with failure that we refused to take risks that could further the cause of peace and freedom in the world. Much is at stake here, and the Nation and the world are watching to see if we go forward together in the national interest or if we let partisanship weaken us. And let there be no mistake about American policy: We will not sit idly by if our interests or our friends in the Middle East are threatened, nor will we yield to terrorist blackmail.

And now, ladies and gentlemen of the Congress, why don't we get to work?

Other Retrospective LOLs: "For starters, the federal deficit is outrageous. For years I've asked that we stop pushing onto our children the excesses of our government. And what the Congress finally needs to do is pass a constitutional amendment that mandates a balanced budget and forces government to live within its means. States, cities, and the families of America balance their budgets. Why can't we?"

Random Storm Cloud: "My friends, it's my duty as president to say to you again tonight that there is no surer way to lose freedom than to lose our resolve. Today the brave people of Afghanistan are showing that resolve. The Soviet Union says it wants a peaceful settlement in Afghanistan, yet it continues a brutal war and props up a regime whose days are clearly numbered. We are ready to support a political solution that guarantees the rapid withdrawal of all Soviet troops and genuine self-determination for the Afghan people." 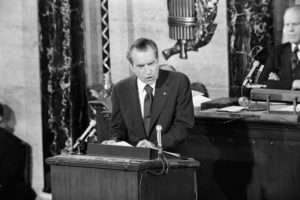 Scandal: It's the reason we add the suffix "gate" to every damned thing.

Timing: The impeachment process against Nixon had started the previous October, after the Saturday Night Massacre series of presidentially prompted firings and resignations of Special Prosecutor Archibald Cox over at the Justice Department. The formal impeachment proceeding was initiated by the House Judiciary Committee just one week after the SOTU.

Referencing the Unpleasantness: Nixon, he wasn't so good at making accurate predictions in his speeches.

I would like to add a personal word with regard to an issue that has been of great concern to all Americans over the past year. I refer, of course, to the investigations of the so-called Watergate affair. As you know, I have provided to the special prosecutor voluntarily a great deal of material. I believe that I have provided all the material that he needs to conclude his investigations and to proceed to prosecute the guilty and to clear the innocent.

I believe the time has come to bring that investigation and the other investigations of this matter to an end. One year of Watergate is enough.

And I want you to know that I have no intention whatever of ever walking away from the job that the people elected me to do for the people of the United States.

How'd That One Go?: Enjoy this photograph from the California of my childhood.

Other Retrospective LOLs: "As we turn to the year ahead we hear once again the familiar voice of the perennial prophets of gloom telling us now that because of the need to fight inflation, because of the energy shortage, America may be headed for a recession. Let me speak to that issue head on. There will be no recession in the United States of America." Whoops!

Random Storm Cloud: "The 17-year rise in crime has been stopped. We can confidently say today that we are finally beginning to win the war against crime…A massive campaign against drug abuse has been organized. And the rate of new heroin addiction, the most vicious threat of all, is decreasing rather than increasing."