When Omar Ameen was arrested in Sacramento, California, in August 2018, federal authorities claimed to have apprehended a dangerous and wanted terrorist who had managed to infiltrate the United States by posing as a refugee from Iraq.

Ameen, the Justice Department said in a statement announcing his arrest, had been a member of al-Qaeda in Iraq and later an operative for the Islamic State. As part of those terrorist organizations, Ameen had "participated in various activities in support of those terrorist organizations, including helping to plant improvised explosive devices, and committing the murder" of a police officer in his hometown of Rawah, near the Syrian border, during the Islamic State's 2014 takeover of the region. Ameen had escaped justice in Iraq, then "concealed his membership in those terrorist groups when he applied for refugee status, and later when he applied for a green card in the United States," the Justice Department said.

It was exactly the type of story that confirmed many anti-immigrant, anti-refugee biases. Local and national news outlets ran with the story of the Islamic State militant arrested on American soil. Here was proof that Islamic State members and other terrorists could infiltrate America by posing as refugees—just as President Donald Trump had warned during a presidential debate in October 2016, when he said accepting more refugees from Syria and Iraq would be "the great Trojan horse of all time."

Except, as an infuriating and deeply reported piece by Ben Taub at The New Yorker argues persuasively, almost none of the basic facts reported by the Justice Department in those original statements seem to stand up to scrutiny. Despite that, Ameen has been locked up in a maximum-security federal prison for more than a year, and the Trump administration is still working to extradite him to Iraq—where Ameen would likely be executed for a crime he did not commit.

The biggest problem with the Iraqi and American governments' case against Ameen? He wasn't even in Iraq when he supposedly committed the murder at the center of his arrest and extradition request.

Ameen and his family fled Iraq in 2012—two years before he supposedly committed that murder—and were living in Turkey after applying for refugee status through a United Nations resettlement program. In order to believe that Ameen is guilty of that crime, you'd have to believe that he returned to Iraq—traveling 600 miles from Istanbul, passing through the chaos of the ongoing Syrian Civil War, and jeopardizing his own life and his family's refugee status—just to kill a single police officer in his former home town before returning to Turkey. That's quite a stretch.

But Ameen has more than just a good alibi. Perhaps the most infuriating part of Taub's article is a detail that federal prosecutors refused to allow to be disclosed in court documents—citing a risk to "national security" if it was disclosed.

That detail? As Taub reports:

[Assistant U.S. Attorney Audrey] Hemesath's secret filing reveals that, "subsequent to the arrest of Ameen, the United States came into possession of potentially exculpatory alibi information." The evidence, which appears to have been collected as part of a surveillance operation on an unwitting target, reveals that "an individual believed to have been co-located with Ameen in Turkey during the pertinent timeframe claims that Ameen never left Turkey."

In other words, the U.S. government has proof that Ameen's alibi is accurate—but it has refused to allow that document to be part of the official record of Ameen's extradition case.

"There's nothing about that sentence that jeopardizes national security," Ben Galloway, Ameen's attorney, tells The New Yorker. "It jeopardizes their case."

To believe that Ameen is an Islamic State fighter who brilliantly conned the United States into granting him refugee status requires an even bigger leap of faith. The U.N. program where Ameen, his wife, and their three children sought refuge resettles people in dozens of countries around the world, and the refugees themselves have no say in where they end up. If the U.N. decided to send Ameen and his family to the United States as part of a conspiracy to infiltrate America with terrorists, then how many other officials must have been part of the scheme?

It would also require you to believe that American immigration officials somehow missed all of this when vetting Ameen's family for refugee status. And you'd have to come up with an adequate answer to the question of why Ameen would go through that years-long process to gain entry to the U.S.—without knowing that he would be sent to the U.S.—when he could have simply bought a plane ticket and come into the country on temporary, tourist visas (like the 9/11 hijackers did).

Between landing in the U.S. in 2014 and being arrested in 2018, Taub reports, Ameen had worked as an Uber driver and a mechanic. He's volunteered at a Mormon charity and learned English. He and his wife had another child—an American citizen—and have applied for green cards.

This is, to put it mildly, not exactly the profile of a hardened terrorist determined to do harm to America.

But he's hardly alone. The whole notion of refugees as "Trojan horse" terrorists-in-waiting is bunk.

In a 2016 study of domestic terror attacks conducted by foreign-born individuals, Alex Nowrasteh, an immigration policy analyst for the Cato Institute, a free market think tank based in Washington, D.C., looked at the period from 1975 through 2015. He found that 154 foreign-born terrorists carried out attacks on U.S. soil that killed 3,024 people. More than 98 percent of those deaths occurred on September 11, 2001.

In a follow-up study published in October by the Journal of Economic Behavior and Organization, Nowrasteh and three of his colleagues found "no relationship between immigration and terrorism, whether measured by the number of attacks or victims, in destination countries," even when immigration comes from Muslim majority countries and countries involved in ongoing armed conflicts, like Iraq.

But that hasn't stopped the Trump administration from stoking fears of terrorism as justification for cutting how many refugees America will accept. The U.S. will accept just18,000 refugees this year, down from a cap of 30,000 in 2019. That's the lowest total in any single year since 1980, when the current refugee resettlement law was passed by Congress, according to the Pew Research Center. 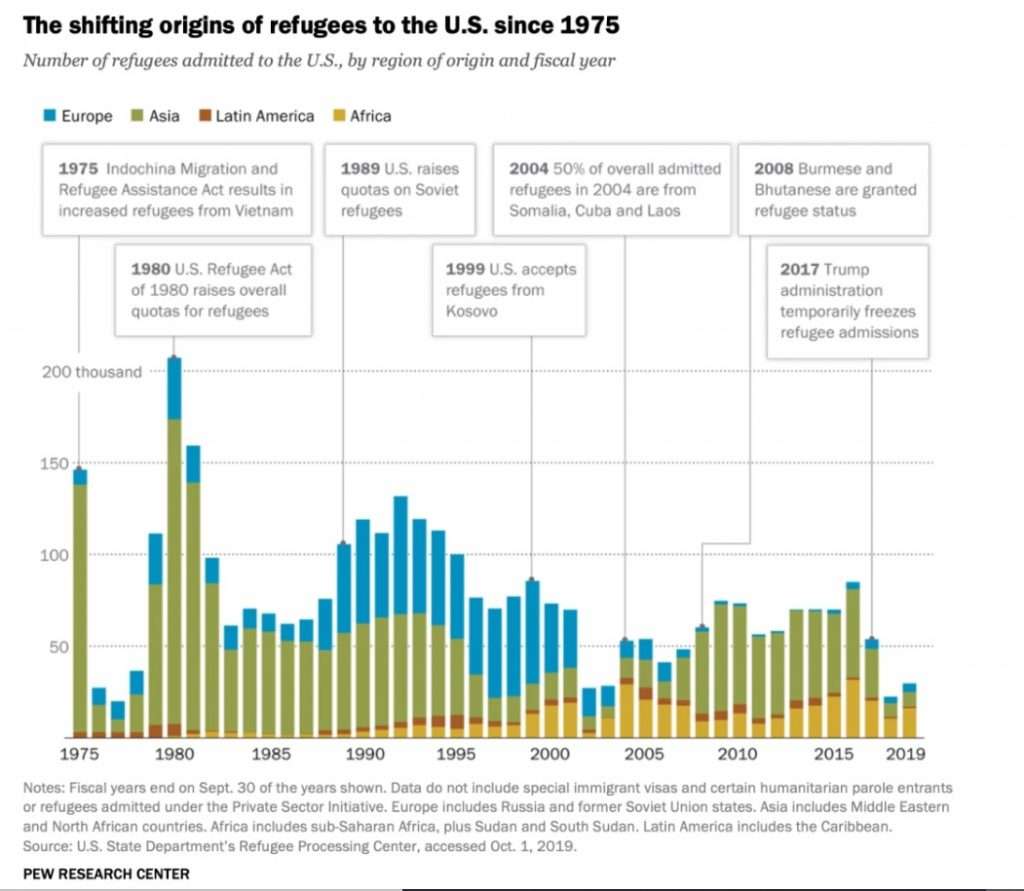 Now, the Trump administration seems determined to make an example out of Ameen.

"The project of government relies on nonpolitical career officials following orders, and executing them well," writes Taub. The FBI, Department of Homeland Security, State Department, and Justice Department, he writes, "have been co-opted into a campaign to extradite an innocent man to almost certain death, in order to make a racist talking point appear to be slightly less of a fiction."

The judge in Ameen's case has given the defense until January 29th to make their final arguments. Under the laws governing U.S. extradition cases, the government only has to show that there is "probable cause" Ameen committed the 2014 murder, not prove his guilt beyond a reasonable doubt.

There is no probable cause. And sending Ameen back to Iraq would be tantamount to giving him a death sentence—seriously, read all the way to the end of Taub's piece, because the kicker is a real doozy.