Additional grand juries will investigate possible wrongdoing by other narcotics officers, including the way the raid was conducted. 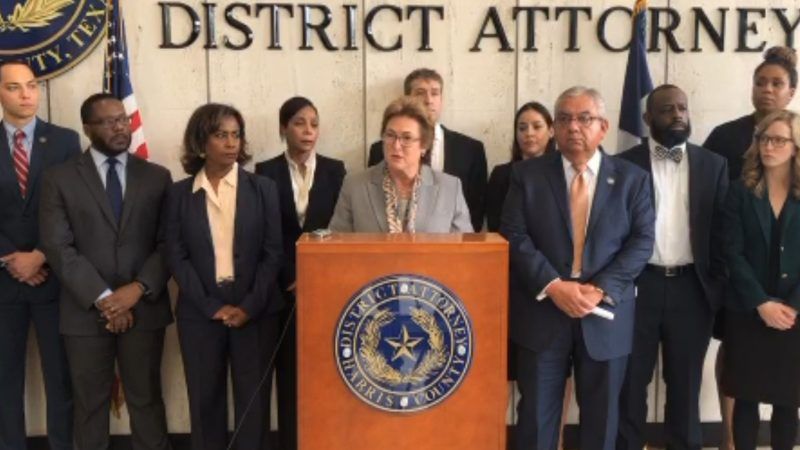 "Because officers lied, people died," Harris County, Texas, District Attorney Kim Ogg said today at a press conference where she announced a grand jury indictment of two former Houston narcotics officers who were involved in a January 2019 drug raid that killed a middle-aged couple in their home. The indictment confirms the state charges filed last August against Gerald Goines, who is accused of lying to obtain the warrant for the raid, and Steven Bryant, who is accused of subsequently backing up Goines' false portrayal of Dennis Tuttle and Rhogena Nicholas as dangerous heroin dealers.

Both men are accused of tampering with a government document, a felony punishable by up to two years in prison. Because Goines' misrepresentations caused two deaths, he is also charged with two counts of felony murder, which could result in a life sentence.

"The grand jury held officers of the law responsible for killing innocent people and their dog in their home," Ogg said in a press release. "Our Constitution guarantees that Americans should not have to fear their government—and when agents of the government violate our rights, they will be held accountable. Our investigation continues, and we anticipate presenting additional evidence to additional grand juries in the future."

Ogg said the second phase of her investigation will focus on additional allegations against Goines, a 34-year Houston Police Department (HPD) veteran who has been accused of stealing money and framing other people, as well as possible wrongdoing by other members of the HPD Narcotics Division's Squad 15. Her office is reviewing some 14,000 cases developed by the 11-member squad, looking for inconsistencies suggesting that people were arrested or convicted based on false information. Dozens of cases already have been dismissed.

"If anyone out there is a victim or has information about somebody else who may have been harmed by Officer Goines or any other person associated with this investigation," Ogg said, "please contact the district attorney's office." Ogg mentioned one such case: Otis Mallet, who was arrested by Goines for crack dealing in 2008 and served two years in prison, has long maintained that Goines fabricated the case against him. During a hearing last week, Mallet's lawyer presented an affidavit from the prosecutor who was initially assigned to that case. She said she had recently become aware of inconsistencies between Goines' expense reports and his trial testimony that would have justified dropping the charges against Mallet.

The third phase of Ogg's investigation will focus on the raid itself, which began when an officer crashed through the front door without warning and immediately used a shotgun to kill a dog. According to the HPD, Tuttle responded to this assault by firing at the officers with a revolver, and the officers fired back. Tuttle and Nicholas were killed, and four officers, including Goines, were wounded by gunfire, although the source of those rounds remains unclear.

A forensic expert hired by Nicholas' family disputed key parts of the HPD's account, including the claim that Tuttle fired at the officers as they entered the house and the claim that they shot Nicholas because she was trying to disarm the officer with the shotgun. "We are looking at the involvement of everyone in the squad," Ogg said. "Each officer on that squad, including those seriously injured, understands that they are under a prosecutorial microscope."

Goines and Bryant also face federal charges related to the raid. According to a federal indictment unsealed in November, Goines began investigating Tuttle and Nicholas based on a false tip from Patricia Ann Garcia, who lived across the street from the couple. To justify a search warrant, Goines later admitted, he invented a "controlled buy" of black-tar heroin by a nonexistent informant—a fiction that Bryant, who was mentioned in the warrant affidavit, helped confirm after the raid, which found no evidence of drug dealing. The federal indictment charges Garcia with conveying false information to the police, Bryant with obstructing justice by falsifying documents, and Goines with violating Tuttle's and Nicholas' Fourth Amendment rights under color of law.