One of the many strengths of HBO's Watchmen, a sequel and "remix" of Alan Moore's seminal 1986 graphic novel that finished an extraordinary first season Sunday night, was its ability to engage with a multiplicity of themes: This was a show about racism, police abuse, 20th century American history and politics, celebrity, inequality, vigilantism, superheroes, the nature of god, and, in the end, the enduring and transcendent power of love. The show is notable for the sheer density of ideas it managed to pack into nine hourlong episodes; it wasn't quite a show about everything, but it sure was a show about a lot. Considering the well-deserved esteem in which Moore's original story is held, it's hard to think of any other recent pop culture high-wire act quite so conceptually ambitious—or successful.

Yet if there was a single thread connecting the show's many themes and questions, it was that those who seek power will inevitably do so badly—even when they have the best intentions. This idea was stated explicitly in the finale, when Adrian Veidt (Jeremy Irons) declared that "anyone who seeks to attain the power of a god must be prevented at all costs from obtaining it."

Veidt, of course, was speaking from a position of firsthand knowledge, as a supergenius who in Moore's comic arranged a fake interdimensional attack by a giant squid thing, killing three million in the process in order to bring the world together and stave off a nuclear apocalypse.

Moore's comic, which took place in an alternate-present America in which the U.S. had won the Vietnam War with the help of Doctor Manhattan, was highly engaged with the Cold War politics of the 1980s. But the political elements were secondary; they existed first and foremost to serve Moore's fatalistic deconstruction of the superhero genre. The story was structured as a kind of argument that superheroes, if they actually existed, would inevitably lose touch with humanity, and as a result would become either cold and distant (Doctor Manhattan) or flat-out monstrous (Veidt). The quest for power, even in the guise of good, would turn supposed heroes into villains. It was a radical upending of the superhero genre and the comic book form: Comic books, with their simple stories of good and evil, were selling a lie. 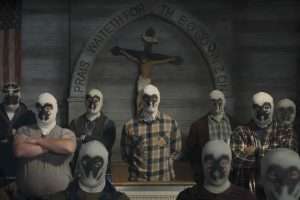 Once again, he has constructed an alternate present, this time in Tulsa, Oklahoma, the site of a horrific 1921 massacre in which white mobs murdered untold numbers of black residents, an event searingly dramatized in the show's opening sequence. That event provides a foundation for the show's altered timeline, one in which city police wear masks and take on superhero guises after being targeted by The Seventh Kavalry, a group of white nationalists who idolize Rorschach, a character from Moore's graphic novel. Richard Nixon is no longer president, but Robert Redford is, and his liberal policies—reparations, gun control, limits on police use of force—are despised by many, and shown in some cases to be ineffective.

Further complicating the situation is the presence of Lady Trieu, another Veidt-like supergenius with a vast fortune to deploy. And, of course, Doctor Manhattan, last seen on Mars, is still lurking out there somewhere—or perhaps hidden in plain sight.

To say much more would be to spoil the series' many well-executed surprises, and to risk simplifying what is ultimately a complex message about the moral imperative to do good and the dangers of concentrated power. It's a show that simultaneously suggests that individuals have a duty to do more, to be better humans, to live more fully up to classically liberal ideals, and also that the pursuit of those ideals on a grander, less distinctively personal scale can, like superpowers, turn someone into a cold and distant monster.

Moore has famously never given his blessing to any adaptation of Watchmen, and he generally takes a dim view of superhero-dominated pop culture. In a recently unearthed interview, he linked today's superhero movies to Birth of a Nation, saying "these books and these iconic characters are still very much white supremacist dreams of the master race." Yet Lindelof and his team of writers channeled both the spirit of Moore's original work and these more recent comments. This is an adaptation and sequel that lives up to its source material, and its creator.

Like Moore's graphic novel, Lindelof's story is structured as a kind of argument about cultural and political power—its limits and its abuses. And like its source material, it resists becoming a simple morality tale. The difference is that, in this case, it's not comic book notions of good and evil that are the target, but simple notions of societal justice. No one, not even a superpowered person with the abilities of a god, can solve every problem, the show seems to say—nor should we want anyone to try. But all of us can, and should, do a little bit, maybe a lot, more to try to change ourselves.

The opinion was written by prominent conservative Judge David Sentelle.