Anatomy of a Drug War Crime

A deadly raid based on a bogus tip and a fraudulent search warrant affidavit highlights loose police practices in Houston. 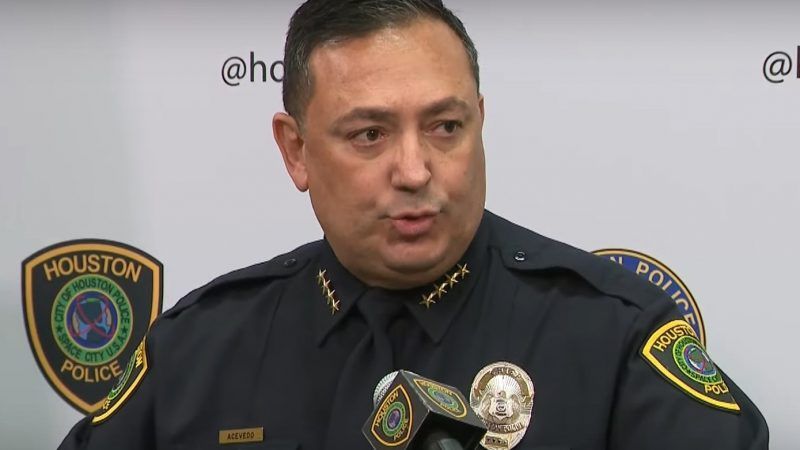 Are you confident that police will not break down your door tonight? If so, it's probably because you assume the warrant required for such an armed invasion of your home has to be based on reliable evidence of criminal activity.

But that is not true in Houston, as a federal indictment unsealed last week shows. According to the indictment, a drug raid that killed a middle-aged couple on January 28 was based on lies from start to finish, which should alarm anyone who thinks the Fourth Amendment protects Americans from unreasonable searches.

The indictment says the no-knock raid at 7815 Harding Street, which found no evidence of drug dealing but set off an exchange of gunfire that killed Dennis Tuttle and Rhogena Nicholas, was based on a false tip and a fraudulent search warrant affidavit. The Justice Department says Gerald Goines, a narcotics officer who retired in March after 34 years with the Houston Police Department (HPD), invented a heroin purchase by a nonexistent confidential informant.

Goines, who already faced state murder charges in connection with the raid, is now charged with civil rights violations that could send him to prison for life. Steven Bryant, a narcotics officer who backed up Goines' story of a drug deal that never happened, is charged with falsifying records. Patricia Garcia, the neighbor whose 911 calls prompted the investigation of Tuttle and Nicholas, is charged with conveying false information to police.

It would be easy to blame this scandal on a malicious tipster and a couple of rogue cops. But the indictment of Goines, Bryant, and Garcia is also an indictment of the policies and practices that allowed this disastrous operation to unfold.

Michael Doyle, a lawyer hired by Nicholas' family, says supervisors let the raid go forward even though they knew Goines had not properly documented his contact with the fictitious informant. Although Goines supposedly had been investigating Tuttle and Nicholas for two weeks, he did not know their names. And although his affidavit said he had "advised" the informant that "narcotics were being sold and stored" at the house, he cited no evidence of that.

Goines had a history of mishandling evidence and making dubious statements under oath. Over 12 years, The Houston Chronicle found, Goines obtained nearly 100 no-knock warrants like the one used in this case, almost always claiming that informants had seen firearms in the homes he wanted to search. But he reported recovering guns only once, a pattern no one seems to have noticed.

The Chronicle also found that, notwithstanding an expert consensus that undercover officers should be frequently rotated to other assignments, 71 officers have served a decade or more in the HPD's Narcotics Division, which at the time of the Harding Street raid had gone 19 years without an audit. You can start to see how the division might have developed a culture of insularity and impunity that led Goines to believe he could get away with his deadly fraud.

The Harris County District Attorney's Office is reviewing more than 2,000 cases in which Goines and Bryant were involved and has already dropped charges against dozens of defendants. Yet even after Goines' lies were revealed, Houston Police Chief Art Acevedo said, "I don't have any indication it's a pattern and practice."

After the raid, Acevedo described Tuttle and Nicholas' home as a locally notorious "drug house" and "problem location." He even claimed the couple's neighbors, who publicly contested that description, had thanked police for raiding the house.

To this day, Acevedo erroneously insists that "we had a reason to be in that house" based on "probable cause." He calls the officers who killed Tuttle and Nicholas "heroes."

The raid prompted Acevedo to impose new restrictions on no-knock raids and belatedly require narcotics officers to wear body cameras while serving warrants. But it seems clear that more systematic reforms are required. Judging from his comments, Acevedo is not up to that task.