This week's Atlanta cattle call was either the fifth or seventh Democratic presidential debate of the year, depending how you count. There have also been countless "forums" in which the candidates appear sequentially rather than all at once. And the Republicans have held three debates of their own, sort of. (The presumptive nominee didn't show up.) By now the barrage is so familiar that it's easy to forget that it's a relatively recent development: Televised debates did not become a regularly recurring part of America's presidential campaigns until 1976.

There were precursors, of course. There was the famous quartet of Kennedy-Nixon debates in 1960, the first time the major parties' nominees faced off on TV. The first presidential debate to be broadcast on the radio took place in 1948, when Thomas Dewey and Harold Stassen went head to head before Oregon's Republican primary. And if you're willing to stretch the definition of "debate," there were the Bryan-Taft face-offs of 1908, in which neither candidate was actually present but their voices were. Think of it as debate by DJ. 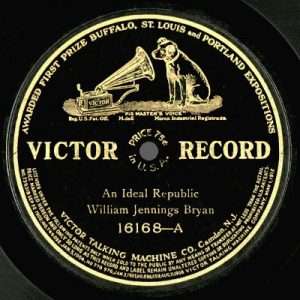 As early as 1896, record companies had sold reenactments of presidential candidates' speeches, with actors playing the candidates. In 1900 the Democratic nominee, William Jennings Bryan, made some recordings himself, but they didn't get distributed. (Subject for another time: why political figures perceived as critics of modernity are often quicker to embrace new mass media.) Finally, in 1908, with Bryan again representing the Democrats and with William Howard Taft running as the Republican, both candidates recorded and released a series of short speeches on several issues, from railroad regulation to imperialism. You could buy these to hear in your home, but various venues also simulated "debates" between the candidates, with records rather than live speakers.

Patrick Feaster describes some of these events in his liner notes to Debate '08, a 2008 CD collecting most of Taft and Bryan's recordings for the Edison company. One debate was held at an opera house in Des Moines, Iowa, with approximately 1,500 people in attendance. ("The overall goal of this event seems to have been to promote phonographs rather than political platforms," Feaster notes. Well, it wasn't the first time politics and commerce coincided.) An arcade in New York City took a more interactive approach. "Its entrance was flanked by wax figures representing the two candidates at flag-draped podiums, including an unconvincingly slim version of Taft," Feaster writes. "Each candidate stood accompanied by signs that urged passersby to come in to hear his own positions and his responses to his opponent's views. Those who accepted the invitation found eight machines with Taft speeches laid out beside nine with Bryan speeches, each available for individual listening through ear-tubes upon deposit of a coin." 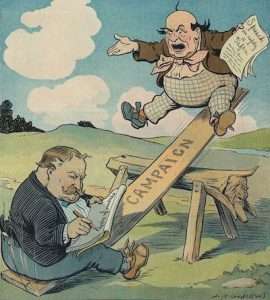 And what did those wax candidates have to say? By this time the Progressive Era was well underway, and the Democrats had embraced far more economic intervention than their party had been willing to endorse the last time it held the presidency, under Grover Cleveland. Indeed, the first time Bryan had won the nomination, back in 1896, several of the old Cleveland Democrats had bolted to form a short-lived third party. But change is a gradual thing, and Bryan frequently framed his arguments in language the old liberals could appreciate. In a speech called "Swollen Fortunes"—1908's counterpart to today's attacks on billionaires—he made his case against concentrated wealth in essentially libertarian terms. After distinguishing "swollen" fortunes from fortunes that are "honestly acquired," he declared: "Swollen fortunes are in almost every case traceable to privileges granted by the government or to favoritism shown to a few at the expense of the rest of the population. The cure for swollen fortunes, therefore, is the restoration of the government to its old foundations and in the application to all branches of the government of the doctrine of equal rights to all and special privileges to none."

And what kind of special privilege did he want to eliminate? In "The Tariff Question," Bryan took on the evils of protective trade barriers:

In another record ("The Trust Question"), Bryan sounded a bit like a modern critic of regulatory capture: He was all for breaking up monopolies but unenthusiastic about schemes to regulate them, declaring that "we have tried regulation, and the result is that the monopolies regulate the government instead of being regulated by the government."

And Taft? In "Roosevelt Policies" he presented himself as heir to the outgoing incumbent, the progressive stalwart Theodore Roosevelt. (Taft was Roosevelt's secretary of war.) In sharp contrast to Bryan, who put out a record condemning imperialism, Taft produced one praising American rule in the Philippines. Bryan brought out a record denouncing "government by injunction"; a Taft release retorted that Bryan would undermine "the authority of the courts." And while Bryan was arguing that free trade would undermine those swollen fortunes, Taft condemned a Democratic proposal "to take off the tariff on all articles coming into competition with those produced by the so-called trusts," claiming that this "would not only destroy the trusts but all of their smaller competitors":

If you forced me to choose, I'd have to pick Bryan. But there are some areas where I'd give the advantage to Taft. Notably, he took the time to record a speech demanding "justice for all men without regard to race or color" and calling for the full enforcement of the Reconstruction amendments. He didn't get into any specifics of what that would mean, and once he became president he didn't do much to fulfill those promises; but in our virtual debate he sounds better than Bryan, who didn't discuss the issue at all. Toothless is better than closed-lipped. (On the broader subject of racial prejudice: Both Bryan's anti-imperial speech and Taft's colonialist counterpart included comments that today come off as racist. But if I were a Filipino in 1908, I'd likely root for the candidate who wants to grant me independence sooner rather than later, not the one eager to uplift me at the point of a gun.)

Taft won on Election Day, but in another sense both men came out ahead. According to Feaster, the Edison company paid each candidate $500 for making these records—more than $14,000 in today's money. Taft got a bonus: a new record player.