The Los Angeles Lakers' small forward LeBron James spoke to reporters yesterday about the early October tweet that has destabilized the NBA's business deals in China. His remarks have infuriated hoops fans and free-speech lovers alike.

On October 4, Houston Rockets General Manager Daryl Morey tweeted an image supporting pro-democracy protesters in Hong Kong. Despite quickly deleting the tweet, mainland China's communist government and its media subsidiaries condemned Morey for tweeting in support of Hong Kong and the NBA for half-defending Morey's right to speak his mind.

Chinese media company Tencent, which is heavily subsidized by the Chinese government and is paying more than a billion dollars to broadcast NBA games, responded with a punitive blackout spree: The company initially pledged to not broadcast Rockets games this season, then it refused to broadcast a preseason basketball game the Lakers and Brooklyn Nets played in China. Deadspin now reports that Tencent may no longer carry a show featuring ESPN's Adrian Wojnarowski, an NBA journalist who is more famous than most players thanks to his ability to break trade news. What does "Woj" have to do with all this? He hit the heart icon on Morey's Hong Kong tweet.

When reporters finally got LeBron on camera and asked him about Morey's tweet before Monday's preseason home game against the Golden State Warriors, King James threw Morey under the bus:

"We all talk about this freedom of speech—yes, we all do have freedom of speech, but at times there are ramifications for the negative, that can happen, um, when you're not thinking about others, or you're only thinking about yourself. So, I don't believe—I don't want to get into a word or a sentence feud with Daryl, with Daryl Morey, but I believe he wasn't educated on the situation at hand, and he spoke. And so many people could have been harmed, not only financially but physically, emotionally, spiritually. So just be careful what we tweet, what we say, and what we do, even though, yes, we do have freedom of speech, but there can be a lot of negative that comes with that, too."

James then followed up with two tweets:

That bit on "thinking about others" is pretty rich. I wonder if James has talked to service sector workers in Asheville, North Carolina, about how hard it was for them to pay their bills during the NBA-led boycott over the state's terrible transgender bathroom bill. (Spoiler alert: tourism travel to the state tanked, and it was, in fact, very hard for them to pay their bills.) Or, he could ask Enes Kanter, the Turkish basketball player who's wanted by his home country for speaking out against Turkish President Recep Tayyip Erdogan, about the harms of speech: 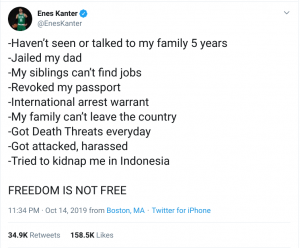 If James wants to say courageous things only when it's cheap and easy, that's his right. When asked about Morey on Monday night, he could've simply echoed NBA Commissioner Adam Silver, who issued a statement on October 8 declaring that "the NBA will not put itself in a position of regulating what players, employees and team owners say or will not say on these issues."

Or he could've followed the lead of Warriors point guard Steph Curry and Warriors coach Steve Kerr and played dumb.

Or he could've done what Slate's Tom Scocca suggests and simply said, "It's a free country." That's it! You can literally answer every question about Morey and Hong Kong by saying, "America is a free country." Then you can tell people to ask you more questions about the Lakers' plan to win it all with two generational talents and 13 has-beens.

LeBron James called President Trump a "bum," so you know he believes in free speech for himself. And based on what he said about Martin Luther King Jr. in 2018, I suspect he believes in it for other people, too. Those values are now running into the economic realities of doing business in a country where free speech is prohibited.

China is essentially paying him to stay in his lane. If LeBron wants to make that tradeoff, that's his business. He's even allowed to say other people should stay in their lane for his benefit. But America is a free country, which means the rest of us can roast him for it.

Don't Use Immigrants as Political Pawns

Netflix's Athena Is a Masterpiece About Police Violence and Social Unrest