The U.S. will pull back troops from northern Syria to make way for Turkey to take over, the White House announced on Sunday. "Turkey will soon be moving forward with its long-planned operation into Northern Syria," said the White House statement, using awfully euphemistic language for what many are describing as a Turkish invasion undertaken with U.S. consent.

The U.S. military will neither support Turkey's moves nor act against them.

Obviously, those who prefer an endless U.S military presence in the Middle East are upset by this. But even some non-interventionists, such as Justin Logan, have been critical of the Trump administration's actions here, saying the sudden withdrawal fails to give Kurdish and other forces in Syria enough time to prepare to push back against Turkey.

Kurds say they were acting in good faith working with US on security mechanism but now feel Turkey was just working on reconnaissance the whole time (joint patrols, flights over Rojava, pulling back from the border etc). This has left them incredibly weak as assault looms 2/

The U.S. military has already withdrawn forces from Tel Abyad and Ras al Ain posts in the area, officials said. It's not clear if the U.S. will withdraw troops from northern Syria entirely.

There were assurances from the United States of America that it would not allow any Turkish military operations against the region. But the [US] statement today was a surprise and we can say that it is a stab in the back for the SDF.

Turkey is not only a NATO member, U.S. ally, and recipient of American aid and arms; it's also a place where Trump has personal business. Many commentators have highlighted a Trump tweet from 2012 announcing the opening of Trump Towers Istanbul:

The man who tweeted this—and who still has business interests in Turkey—was the same man who just unilaterally made a US foreign policy decision to help Turkey's president while abandoning America's Kurdish allies, leaving them to a dire fate. https://t.co/UBrMuYdQzS 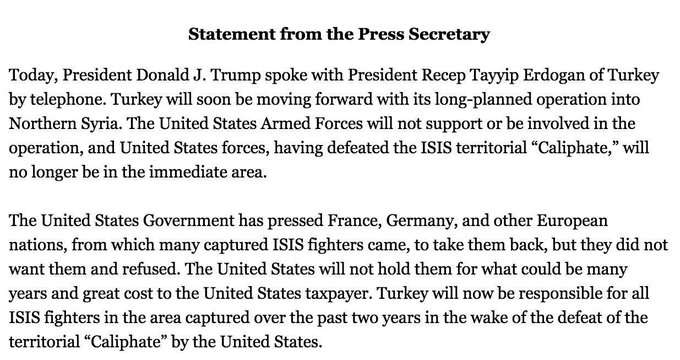 McGurk objects that the U.S. "is not holding any ISIS detainees" itself. Captured ISIS fighters are being held by the SDF, "which Trump just served up to Turkey."

Trump tweeted more about Syria this morning, in a typically confused mix of facts and garbled braggadocio.

The United States was supposed to be in Syria for 30 days, that was many years ago. We stayed and got deeper and deeper into battle with no aim in sight. When I arrived in Washington, ISIS was running rampant in the area. We quickly defeated 100% of the ISIS Caliphate,…..

Sen. Lindsey Graham (R–S.C.), usually one of the biggest Trump sycophants in Congress, has called the move "a disaster in the making." Graham tweeted this morning that "if this plan goes forward," he will sponsor a "Senate resolution opposing and asking for reversal of this decision. Expect it will receive strong bipartisan support."

Iraq has undergone days of protests, as "large crowds of mostly young Iraqis have poured onto the streets of Baghdad and other cities in an outburst of anger over chronic unemployment, corruption and poor public services, including access to water and electricity," Al Jazeera reported on Saturday.

Along with tear gas, police have also fired water cannon, live rounds and rubber bullets to disperse the rallies, which began on Tuesday when thousands in Baghdad answered a call on social media.

The prime minister "imposed a near-total internet blackout" and a curfew that was lifted Saturday.

Al Jazeera notes: "At least 109 people have now been killed since the unrest began on Tuesday—and more than 6,000 people have been injured."

The Supreme Court is back in session today. On the upcoming docket: cases about whether gender identity is covered by laws against discriminating based on sexual orientation; a New York law preventing people from taking legally owned firearms to gun ranges out of the city; a Louisiana law requiring abortion clinic doctors to have admitting privileges at local hospitals; the Trump administration's changes to the Deferred Action for Childhood Arrivals (DACA) program; and Montana's exclusion of religious schools from a state scholarship program.

People under 35 don't remember the bizarre, saccharine jingoism of the First Gulf War in the early 1990s.

Today, I purchased some vintage packs of "Desert Storm Trading Card"….and they are a trip back in time to a somehow-even-worse era of made-for-TV warmongering.