A former Dallas cop is fighting a murder charge in court this week. Last September, she shot and killed a neighbor in his own apartment after mistaking his home for her own and assuming he was an intruder. Even though she was the actual intruder, she is claiming she killed the man in self-defense.

The ex-cop, Amber Guyger, is battling one count of murder for killing Botham Jean. If convicted, she faces anywhere from five to 99 years in prison. She was initially charged only with manslaughter, but after further review of the evidence a grand jury later indicted her for murder. The trial began Monday and is expected to run about two weeks. 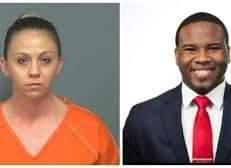 Jean had been sitting on his couch eating a bowl of vanilla ice cream when he heard Guyger enter his apartment. According to Guyger's defense attorney, Robert Rogers, Jean was startled by the sudden intrusion, shouted "Hey! Hey!," and rose from the couch. Guyger then drew her gun and fired two shots at Jean, piercing his heart and lungs. In the defense's opening statement, Rogers argued that Guyger's fatal mistake resulted from a culmination of exhaustion from working 40 hours in four days, knowledge of recent burglaries in the complex, and genuine confusion over whose apartment she was in.

Rogers claimed that Guyger attempted to de-escalate the situation by demanding that Jean show her his hands, and that this failed because Jean's shouting drowned out her orders and made the officer "fear for her life." Jean's last words, according to a witness, were "Oh my God, why did you do that?"

Assistant District Attorney Jason Hermus noted that Guyger failed to follow her police training for what to do if she suspected someone of being a burglar. The correct response was to retreat, take cover, and call for backup, not open fire.

On Thursday, State District Judge Tammy Kemp blocked a portion of lead investigator David Armstrong's testimony. Armstrong claimed that Guyger had acted reasonably and had not committed a crime in shooting Jean. Kemp ruled that this information only represents Armstrong's opinion and is not admissible in court.

Bodycam footage of Jean's final moments depicts Guyger, still clad in her police uniform, frantically repeating "I thought it was my apartment" as officers begin CPR on Jean. Guyger also stated that she thought she was in her apartment approximately 20 times in her initial 911 call.

In the same call, she said "I'm gonna lose my job," prompting District Attorney Hermus to declare that Guyger appeared "as concerned or more concerned about how [the shooting was] going to concern her than this poor guy on the floor next to her."

The defense's motion for a directed verdict of not guilty for the murder charge has been denied. Jean's family has also filed a civil suit against the City of Dallas.