So it turns out that the Democrats are coming for your guns. Well, maybe not yours. Not yet, at least. Then again, it is not always obvious which guns Democrats have in mind when they talk about bans and mandatory buybacks. What's clear is that they view the people who own those guns as useful scapegoats for horrifying acts of violence.

"How do you address the fears that the government is going to take away assault rifles if you are talking about buybacks and banning?" the reporter asked.

"I want to be really clear that that's exactly what we are going to do," O'Rourke replied. "Americans who own AR-15s [or] AK-47s will have to sell them to the government. We're not going to allow them to stay on our streets, to show up in our communities, to be used against us in our synagogues, our churches, our mosques, our Walmarts, our public places."

Last night O'Rourke, responding to Muir's question, doubled down on that pledge. "Hell, yes, we're going to take your AR-15, your AK-47," he said, eliciting wild applause from the audience. "We're not going to allow it to be used against our fellow Americans anymore." That was quite a turnaround from last year, when O'Rourke was running for the Senate and assured a radio host, "If you own a gun, keep that gun. Nobody wants to take it away from you—at least I don't want to do that."

In his new incarnation as a gun grabber, O'Rourke favors a ban on "the manufacturing, sale, and possession of military-style assault weapons," with no exceptions for guns people already own. But since "military-style assault weapons" are in the eye of the beholder, that description does not provide very clear guidance to gun owners who wonder whether O'Rourke is intent on seizing their property.

Consider the Assault Weapons Ban of 2019, introduced in January by Sen. Dianne Feinstein (D–Calif.), who also sponsored the 1994 federal "assault weapon" ban that expired in 2004. Feinstein's bill bans more than 150 models by name, but it also includes a general definition that covers semi-automatic rifles with detachable magazines and one or more "military-style" features. Those features include barrel shrouds, which would seem to condemn one of my guns, an Iver Johnson M1 carbine:

Feinstein's distinction makes no sense. Neither did O'Rourke when he said an "assault weapon" ban would cover guns that fire "high-impact, high-velocity round[s]," since the legal definition of "assault weapons" has nothing to do with the size or velocity of the ammunition they fire.

These are not quibbling details, since "assault weapons" are an arbitrary category that means whatever legislators decide it means. The original federal ban applied to semi-automatic rifles with two or more military-style features; Feinstein's new bill says just one is enough to qualify for prohibition. But the list of features is still mainly cosmetic and has little or nothing to do with a gun's suitability for mass shootings, which are usually committed with handguns.

Former Vice President Joe Biden, like all the other Democratic presidential contenders, wants to ban "assault weapons." Yet he concedes that the 1994 ban had no impact on the lethal capacity of legal firearms, since gun manufacturers could comply with the law by "making minor modifications to their products—modifications that leave them just as deadly." That is equally true of the new version proposed by Feinstein. Politicians like O'Rourke are basically saying that they reserve the right to take your gun if they don't like the way it looks.

O'Rourke promises he will "bring everyone in America into the conversation— Republicans, Democrats, gun-owners, and non-gun-owners alike." But if a gun owner says he'd prefer to keep his property rather than surrender it to the federal government, that's too bad.

The gun owner might point out that Americans own more than 16 million "assault weapons," and almost none of them are ever used to kill people. In 2017, according to the FBI, all rifles combined—only a subset of which would qualify as "assault weapons"—accounted for just 5 percent of gun homicides where the type of firearm was specified, while handguns accounted for 89 percent.

The gun owner might wonder why he has to surrender his rifle simply because mass shooters occasionally use a similar model. By that logic, the government should first confiscate handguns, which are used in the vast majority of gun homicides, including mass shootings. But that argument will be of no avail in the "conversation" that O'Rourke imagines, because he has already arbitrarily decided that features such as barrel shrouds, folding or adjustable stocks, pistol grips, and threaded barrels cannot be tolerated.

The federal government, of course, does not know who owns the guns that O'Rourke does not like. So you might wonder how he plans to carry out his confiscation scheme.

As Reason Contributing Editor J.D. Tuccille notes, history suggests that voluntary compliance would be the exception. A year after New Jersey banned the possession of unregistered "assault weapons," a grand total of 18 had been surrendered or confiscated, out of an estimated 100,000 to 300,000 guns covered by the law. California, New York, and Connecticut met with similar success when they required registration of "assault weapons" owned before those states banned them: Only a small minority of the targeted guns, ranging from 2 percent to 15 percent, were actually registered.

Since O'Rourke has already announced that he plans to confiscate "assault weapons," and not merely register them, he can expect even wider defiance. A mandatory "assault weapon" buyback program therefore would be symbolism on top of symbolism: an ineffectual attempt to enforce arbitrary distinctions.

The symbolism is not just about seeming to do something that will stop mass shootings. It is also about demonizing the sort of people who own the guns that O'Rourke and his fellow Democrats detest. Notwithstanding O'Rourke's promise of a civil "conversation" with gun owners, his campaign is now selling this mocking/threatening T-shirt: 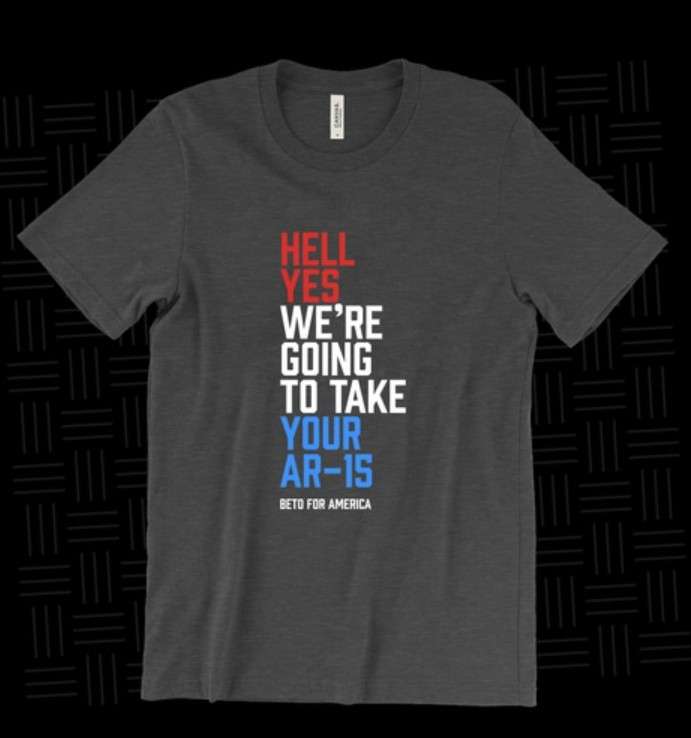 O'Rourke supporters who wear this shirt are obviously not interested in a calm, rational discussion about gun control. They already know who the enemy is: people who own AR-15s and people who defend their right to do so.

The owner of an AR-15 must turn it over to the government, O'Rourke says, because "we're not going to allow it to be used against our fellow Americans anymore." But O'Rourke wants to take guns from peaceful, law-abiding people who have never used those firearms against their fellow Americans. In his mind, they are nevertheless implicated in mass murder.

That attitude is of a piece with the poisonous mentality that gave us the resolution in which the San Francisco Board of Supervisors condemned the National Rifle Association, which has 5.5 million members, as a "domestic terrorist organization." If you oppose the gun control laws that O'Rourke and San Francisco's supervisors favor, they seem to be saying, you might as well be shooting down schoolchildren or Walmart shoppers.

Applauding O'Rourke's position last night, Sen. Cory Booker (D–N.J.) also slyly suggested that the former congressman is a Johnny-come-lately on gun control, having been awakened to the need for extreme measures by last month's mass shooting in El Paso, his hometown. "I'm sorry that it had to take issues coming to my neighborhood or personally affecting Beto to suddenly make us demand change," Booker said. "This is a crisis of empathy in our nation." On that much I agree.