The Transportation Security Administration (TSA) has banned passengers from bringing special bottles of Coca-Cola sold at Disney theme parks onto planes because the containers resemble the fictional "thermal detonator" devices in the Star Wars universe.

The bottles are being sold at the newly opened Galaxy's Edge, a Star Wars–themed attraction at Disneyland in California and at Disney's Hollywood Studios in Florida. It's a clever bit of marketing, but any parkgoers who want to take their Coke bottles home as soveigners will be out of luck if they plan to fly.

"It could create concern that it's the real thing," TSA spokesperson Jim Gregory told the Orange County Register, which first reported on the ban.

Really? Let's think through this. Anyone familiar enough with Star Wars to recognize a Coke bottle made to resemble a thermal detonator is also going to be aware of the fact that thermal detonators are fictional. Anyone else is just going to think, "Wow, that's an odd-looking Coke bottle."

Even a lot of casual Star Wars fans might not know what the bottle is supposed to mimic, since the thermal detonator isn't a well-known weapon. It's mostly just a minor plot device. Introduced in 1983's Return of the Jedi, the thermal detonator is a baseball-sized explosive that is implied to be very powerful. One is brandished menacingly by a disguised Princess Leia in the movie, but it never actually explodes on-screen. (Anton Chekov would be disappointed.)

But you know what does get used pretty often in Star Wars movies to kill and maim a lot of people and aliens? Lightsabers. And do you know what the TSA's policy regarding lightsabers is? They're perfectly fine—even in carry-on luggage! 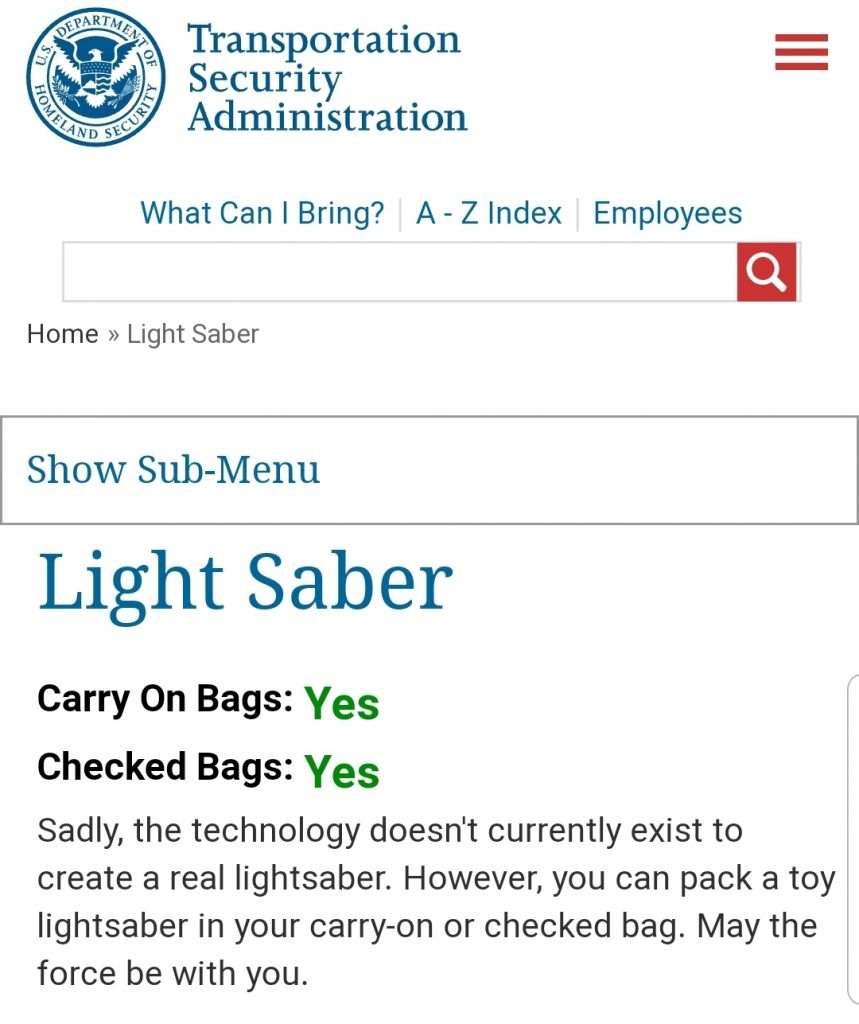 That's because plastic reproductions of laser swords carried by fictional space warriors are obviously not actual weapons. No one worries about confusing a lightsaber with "the real thing," because that's ridiculous. But plastic Coke bottles shaped like a fictional explosive device that never actually explodes? Those are so dangerous that they can't even be packed in checked bags.

"The issue concerning Star Wars Galaxy's Edge-themed soda bottles has recently been brought to our attention by the general public, as these items could reasonably be seen by some as replica hand grenades," the TSA said in a statement Wednesday. "While we continue to review this issue, TSA officers will maintain the discretion to prohibit any item through the screening checkpoint if they believe it poses a security threat."

Sadly, the TSA has a long and inglorious history of making arbitrary decisions about what counts as a "security threat." The "thermal detonator" Coke bottles are forbidden under the same broad ban on replica weapons and explosives—except for lightsabers, I guess?—that has previously led TSA agents to seize items as innocuous as whiskey stones shaped like bullets.

This nonsensical prohibition is another good reminder that, nearly two decades after it was created, the TSA is not the last line of defense against terrorism. It's a bloated, wasteful bureaucracy that treats innocent Americans like criminals and then shares those stories for laughs on social media. It kills bunnies, gropes grandmothers, detains kids, and still can't find most of the actual weapons that get smuggled onto planes.

Are airline passengers safer travelling without Coke bottles shaped like fictional Star Wars bombs? No, they are exactly as safe as they would have been otherwise.