The Houston Police Officers' Union is no longer covering the legal fees of Gerald Goines, who faces two murder charges. 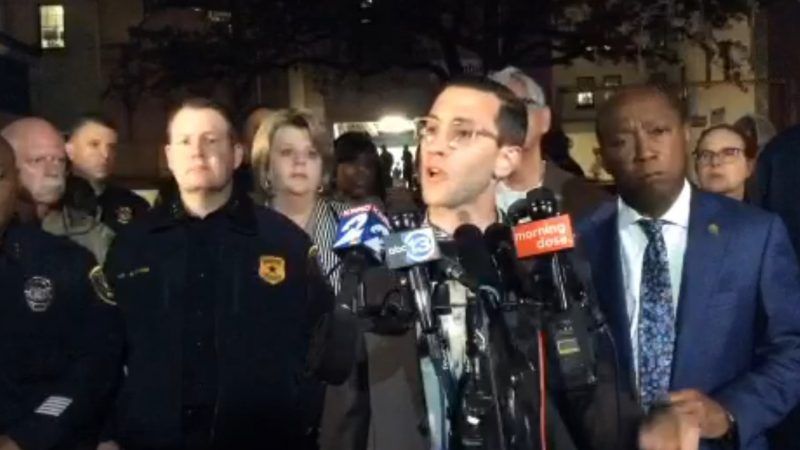 What does it take for police unions to reconsider their reflexive support for officers accused of wrongdoing? We may be finding out in Houston, where a deadly no-knock drug raid based on a false search warrant affidavit recently resulted in felony murder charges against the officer who instigated it.

After Houston narcotics officers invaded the home of a middle-aged couple and shot them dead on January 28, 2019, the president of the Houston Police Officers' Union lashed out at critics of such law enforcement practices. "We are sick and tired of having dirtbags trying to take our lives when all we are trying to do is protect this community and protect our families," Joe Gamaldi angrily proclaimed at a press conference hours after the deadly drug raid at 7815 Harding Street, during which four officers were wounded by gunfire that started when they broke into the house and used a shotgun to kill a dog. "Enough is enough. And if you're the ones that are out there spreading the rhetoric that police officers are the enemy, just know, we've all got your number now. We're going to be keeping track of all ya'll, and we're going to make sure that we hold you accountable every time you stir the pot on our police officers."

Gamaldi's divisive, inflammatory rhetoric was too much even for Houston Police Chief Art Acevedo, who described the officers who killed Dennis Tuttle and Rhogena Nicholas as heroes but nevertheless chided Gamaldi for his "over-the-top" remarks, saying, "Joe Gamaldi's emotions got the best of him." Yet even after his emotions cooled, Gamaldi continued to back the officers who carried out the raid.

Gamaldi did not offer a retraction after police found no evidence that the "dirtbags" killed by police that day were actually selling heroin, as the affidavit for the no-knock search warrant claimed. And after Acevedo revealed, at a February 15 press conference, that Gerald Goines, the narcotics officer who wrote the affidavit, had described a fictitious heroin purchase by a nonexistent confidential informant, the union that Gamaldi heads stood by Goines, paying his legal fees "for months" after the raid, according to KPRC, the NBC station in Houston.

That means the union was still paying for Goines' lawyer even after Gamaldi publicly expressed unease about the allegations against him. "Obviously, the accusations are very, very serious, and it is very, very disturbing, but it is not a reflection of the 5,200 brave men and women of the Houston Police Department who go out there and earn the trust of the community every time they interact with them," Gamaldi told KTRK, the ABC station in Houston, the day that news of the falsified affidavit broke. "Allegations this serious, where someone has falsified a warrant, is absolutely a crime and if the allegations are true, he's looking, at minimum, [at a charge of] falsifying a document."

Now that Goines has been charged with two counts of felony murder in connection with the raid, however, the union is no longer paying his lawyer, KPRC reports. It's not clear from the KPRC story exactly when that decision was made, but it is long overdue. You might think Gamaldi and his union would have had second thoughts about backing Goines after he admitted, within weeks of the raid, that he had lied in his affidavit, or after it emerged that such dishonesty was part of a personal pattern.

The union is continuing to cover the legal fees of Steven Bryant, a narcotics officer who backed up Goines' story about a "controlled buy" that never happened. Bryant faces a charge of tampering with a governmental record, a second-degree felony punishable by two to 20 years in prison. Harris County District Attorney Kim Ogg said Bryant lied in an offense-report supplement about confirming that the "brown powder substance" a confidential informant supposedly purchased from Tuttle was black-tar heroin and lied about recovering more of the same from the Harding Street house after the raid.

The union's continued support for Bryant—who, like Goines, retired from the Houston Police Department after the raid and is now collecting his pension—is consistent with the way Gamaldi has portrayed this fiasco: as an isolated incident that can be blamed on a single rogue cop. "We believe, truly, this is only one person who has caused the issues with this case," Gamaldi told KTRK in February, "and there is only one person who is facing these types of allegations right now."

That is no longer true, and the list of defendants may expand further. Ogg has said a Harris County grand jury will consider whether there is evidence to support criminal charges against other officers involved in the raid. "We are interested in figuring out whether the officers in the stack that were sent in by Gerald Goines were innocent players," she told KPRC. It seems fair to surmise that Gamaldi does not share her curiosity.