Denver's most controversial diner is finally getting the go-ahead to be demolished after preservationists withdrew an application to have the building declared a historic landmark.

That application came over the objections of Tom Messina, owner of the targeted Tom's Diner. Messina had planned to sell his popular, downtown restaurant to Colorado-based developer Alberta Company for $4.8 million. Alberta Company had planned to replace the diner with an eight-story block of apartments and retail shops.

However, preservationists argued that the mid-century Googie aesthetic of Messina's restaurant, conspicuous for its distinctive tilted roof and expansive glass windows, added tremendous character to the city and to the rapidly redeveloping Colfax Avenue on which it is located.

A landmark designation would have stopped the diner's redevelopment. It also would have severely reduced the sale price of the land, upending Messina's plans to finance his retirement with the money Alberta was offering.

"I'm a restaurateur who's worked his life flipping pancakes and selling eggs," Messina told Reason earlier in August. "I have a beautiful family I want to spend time with. I just turned 60 and I want to do something else."

Preservation activists filed their landmarking application in June. For a while, it looked like things would go their way.

In mid-July, city staff issued a report in which they recommended that the property be designated a historic landmark. The following week, Denver's Landmark Preservation Commission voted unanimously to recommend landmarking the restaurant too.

In early August, a city council committee also voted to make Tom's Diner a protected landmark. Only a vote of the full Denver City Council was needed to make it official. That vote was supposed to happen on August 26.

The prospect of the city council voting to landmark his property was upsetting for Messina.

"I'm sure people can imagine how it would feel," he said. "You plan for something and you think it's yours to do as you wish and then this pops up."

Preservationists' withdrawal of their application makes this issue moot. Instead, a city planner tells local news outlet KDVR that the city will now issue a certificate of non-historic status for the diner, meaning it can be demolished.

In explaining the sudden withdrawal of their landmarking application, activists expressed hope that the diner might still be saved.

"It is our firm belief that the future of the building is in good hands and [we] think that interested parties can come to a conclusion as soon as possible," said the group in a statement to KDVR. "We hope that new parties coming to the table can use creative strategies to include the preservation of the iconic Googie-style building in a development that enhances the Colfax corridor."

The landmarking applicants had met with Messina throughout the process to try to work out a compromise.

CityLab reports that Historic Denver, a preservationist non-profit assisting with the landmarking application, had an architect draw up plans for the site that would have preserved the diner by building a taller apartment building on the unoccupied portion of Messina's property.

Historic Denver had worked out a similar deal with a developer of a nearby site, convincing them to incorporate, rather than demolish, a historic brick building into a mixed-use development project at 17th Avenue and Pearl Street. As one can see from satellite images of the two lots, the historic building at the 17th and Pearl site (pictured right) takes up much less of that site, making its preservation less costly to the developer. 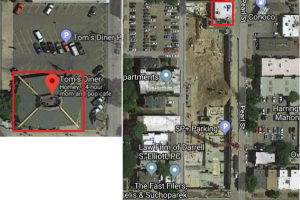 Messina told Reason that agreeing to not develop some 40 percent of is property would dramatically reduce its sale price. He also said he hadn't found a developer to build the project activists were looking for.

The effort to landmark the diner over Messina's objections received generally negative attention from the local Denver press. The Denver Post editorial board came out against landmarking the building.

It's possible that this pressure convinced activists to shelve their application.

It is possible that some sort of compromise development scheme for Tom's Diner is still in the running. Any such deal, however, will now have to get the full consent of Messina—it's his property after all.

Paul Krugman's 10-Year History of Being Wrong About Bitcoin

Why is it so hard for him to just admit he was wrong?

Over 24 Cops Raided the Wrong Address and Wrecked an Elderly Man's Home. They All Got Qualified Immunity.

There will be no justice for Onree Norris.