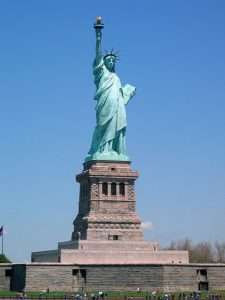 The Trump administration's new "public charge" rule for immigrants is an  attempt to massively cut legal immigration, under the guise of constraining welfare spending. I was thinking of writing a more detailed post on this subject. But David Bier of the Cato Institute has already published an excellent analysis that I cannot hope to improve on. Reason's Shikha Dalmia has helpfully expanded on  Bier's analysis (see also her discussion of an earlier version of the proposal). As they explain, the new rule would massively cut legal immigration, including by excluding large numbers of people who are net-positive fiscal contributors to the treasury. It does not exclude people based on actual use of welfare benefits, but merely based on a skewed bureaucratic determination that they are likely to use them for over 12 months during a 3 year period. In addition, the rule would cruelly separate large numbers of American citizens from parents, children, and other relatives.

As Shikha notes, this rule is also a massive executive power grab (unilaterally imposing a major change in immigration policy, unauthorized by Congress), of a sort that Republicans would surely have condemned had a Democratic administration done it. The rule is also, of course, just the latest front in the Trump administration's longstanding effort to cut legal immigration as much as it possibly can—a record that gives the lie to oft-heard claims that the administration only objects to illegal immigration.

I would add that the administration's plan to massively restrict immigration based on bureaucratic determinations about potential future welfare usage is based on reasoning similar to that of early 20th century eugenics advocates, who argued that we must use the power of  the state to preclude people from having children, if government experts determined that they were likely to become dependent on welfare.

As Justice Oliver Wendell Holmes put it in Buck v. Bell (the notorious 1927 Supreme Court decision upholding mandatory sterilization laws for those deemed mentally unfit), many  advocated such measures in order to prevent "those who already sap the strength of the State" from having "socially inadequate offspring" who are likely to become a fiscal burden. For many potential immigrants being forcibly condemned to a lifetime of poverty and oppression in Third World societies (and separated from close family members in the US, to boot), is an imposition comparable in magnitude to the mandatory sterilization once defended by Holmes and others.

As Bier and Dalmia explain, empirical evidence cuts against claims that immigration is straining the welfare state. But  to the extent that this is a genuine problem, the proper solution is not migration restrictions, but limitations on the actual welfare benefits themselves. The latter is far more just and humane than the former, and does not require relying on dubious predictions by government bureaucrats.

The Snobbery Is Partly the Point in Downton-esque Belgravia

Is Quibi the Next Revolution In Small Screen Streaming Video?