Following the weekend's mass shootings, Reason has been a vocal critic of fact-free attempts to blame real-world violence on video games.

Meanwhile, others have turned to data manipulation as they try to pivot the argument back toward gun control measures that would violate Americans' Second Amendment rights as surely as video game censorship would violate the First. On Monday, Vox published this graph calling the United States an "outlier" in gun deaths among countries with lots of gamers, which quickly made the rounds on social media: 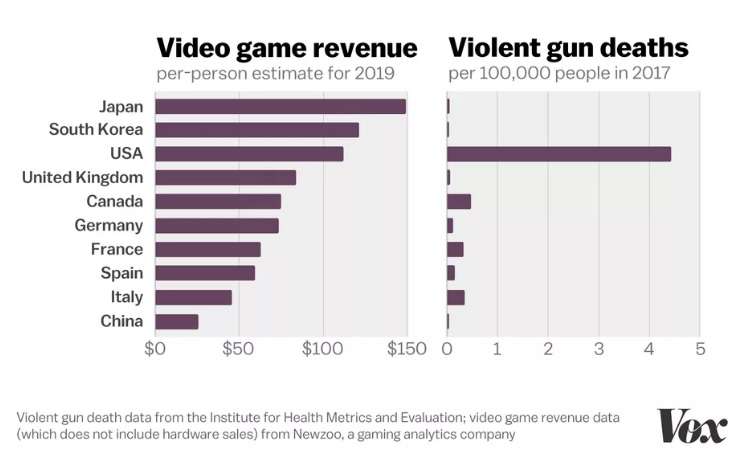 This data doesn't appear to be inaccurate, but there is an omission worth noting here.*

This chart leaves out one major video game market: Brazil. Brazil is the largest game market in Latin America and currently ranks 13th worldwide in game industry revenue. It would most certainly be a top-10 country if its taxes and tariffs didn't make importing games down there so hard. (In fact, it has a huge game piracy issue because of the taxes.) It probably didn't make Vox's cutoff for revenue, but it's definitely one of the top countries for video game players, even if the industry as a whole doesn't earn quite so much there, and it's a fast-growing market. Smart game companies (especially those who make online competitive games) deliberately put characters or elements in their games designed to appeal to Brazilian players.

America's gun violence rate absolutely pales in comparison to Brazil's. If Vox had included Brazil on the chart it would have to change the scale entirely. Brazil had three times as many gun homicides as the United States in 2017—about 43,000 compared to 15,500 in the United States.

None of this is evidence that video games actually do contribute to violence in Brazil (or in the United States). Rather, the way Vox approached this gun violence data was designed to make the United States appear to be an outlier among all countries. In reality, Brazil is a country with a similar love of video games and a much worse gun violence problem. There, just as in America, people blame the problem on too much gun access, even though the country has strict gun controls that criminals just bypass.

Some gun control advocates are strong supporters of studies that claim easy access to these weapons contributes to America's high suicide rate. But when you look at Brazil, which is also awash with guns, the suicide rate is much lower: 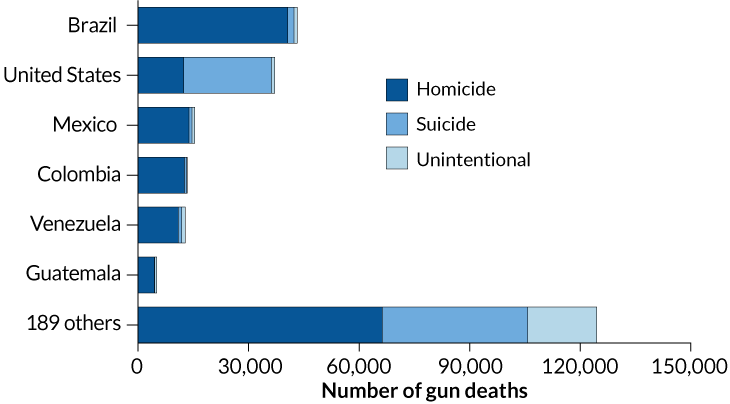 *CORRECTION: This post has been edited to correct a mistake on our end in analyzing the "violent gun deaths" part of the Vox chart. The deaths per 100,000 people on the chart were calculated only from gun-related homicides and did not include suicides. We incorrectly interpreted the chart's label as including both.