Warnings of an impending "bee apocalypse" became widespread in 2006, after some commercial beekeepers reported the mass disappearance of worker honeybees from a substantial proportion of their hives, leaving behind larva, young bees, queen bees, and supplies of honey. That winter, between 651,000 and 875,000 of the nation's estimated 2.4 million commercial colonies were lost to the phenomenon, dubbed colony collapse disorder (CCD).

Similar mass colony losses have been documented 23 times since 1868. The current outbreak is associated with infestations of invasive varroa mites; with new diseases, including Israeli acute paralysis virus and the gut parasite Nosema; with exposures to some pesticides applied to crops or used to control in-hive parasites; and with poor nutrition stemming from inadequate forage.

Commercial beekeepers across the United States lost 40.7 percent of their honeybee colonies from April 2018 to April 2019, according to the latest annual survey conducted by researchers at the University of Maryland. That loss is a slight increase over the annual average of 38.7 percent, which is roughly double the normal rates prior to the appearance of CCD.

In his August/September 2017 Reason article, "How Capitalism Saved the Bees," Shawn Regan, a research fellow at the Property Environment Research Center in Bozeman, Montana, reported that in spite these CCD losses, the number of commercial colonies in the United States has basically remained steady over the past two and half decades, at around 2.5 million hives: 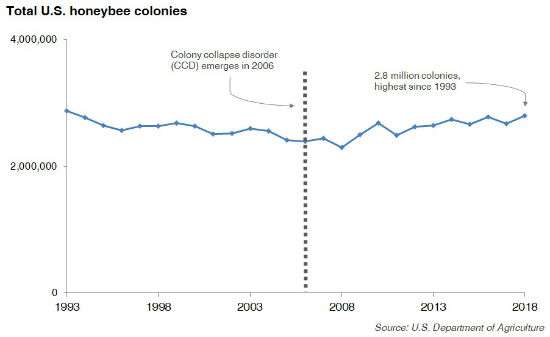 "Thanks to a robust market for pollination services, [commercial beekeepers] have addressed the increasing mortality rates by rapidly rebuilding their hives, and they have done so with virtually no economic effects passed on to consumers," explained Regan. "It's a remarkable story of adaptation and resilience, and the media has almost entirely ignored it."

Commercial beekeepers criss-cross the country selling their honeybees' pollination services to farmers. Many travel in early spring to pollinate almonds in California, then on to Oregon and Washington for apples, pears, and cherries, and later on to blueberries in Maine. The U.S. Department of Agriculture has suspended publication of its annual cost-of-pollination reports, but in 2016 income from pollination services was reported as $338 million.

To satisfy the demand for pollination services, beekeepers have long developed techniques for rebuilding lost colonies. This is routinely achieved either by splitting and then introducing a new queen to healthy hives or purchasing packaged bees consisting of around 12,000 workers and a queen from breeders.

A new study in the Journal of the Association of Environmental and Resource Economists confirms that beekeepers have readily adapted to the challenges posed by CCD. Among other things, they find that "the CCD-induced increase in pollination fees increased the retail price of a $7-per-pound can of Smokehouse Almonds by approximately 1.2% or 8.4¢."

While the tone of much discussion of pollinators and their health is bleak, our results give cause for considerable optimism, at least for the economically dominant honey bee. We find that CCD has had measurable impacts in only one economically important segment of the industry: pollination fees for almonds. As a whole, the impacts are small relative to our priors. Moreover, and in stark contrast to perceptions formed from surveying media sources as well as a substantial body of academic literature, we find that CCD has not had measurable effects on honey production, input prices, or even numbers of bee colonies. We attribute these findings to a factor largely overlooked in the scientific and popular literature on pollinator decline: the ability of well-functioning markets to adapt quickly to environmental shocks and to mitigate their potential negative impacts.

In other words, capitalism is indeed saving the bees.

Democrats Can't Use Reconciliation To Pass a $15 Minimum Wage. Here's What They Might Do Next.

Trump-Biden Continuity As U.S. Military Carries Out Airstrikes in Syria

The Media Have Finally Realized That Cuomo and Newsom Are Terrible. Will Voters?

The governors of New York and California have botched major aspects of the pandemic response.