An independent analysis of President Donald Trump's ballyhooed rewrite of the North American Free Trade Agreement (NAFTA) projects that the new three-way trade deal would provide a boost to the U.S. economy but would result in the outsourcing of more automaking jobs.

Overall, though, the United States-Mexico-Canada Agreement (USMCA) is a modest, mild set of reforms—Trump has called NAFTA "one of the worst deals ever" but his proposed replacement is basically NAFTA 2.0, according to the estimates provided by the International Trade Commission (ITC) in a report released Thursday. The new report is unlikely to ease the USMCA's passage through Congress, where factions on both sides of the aisle remain skeptical about the merits of replacing the 26-year-old NAFTA.

The ITC report projects the USMCA would hike U.S. gross domestic product by $68.2 billion (0.35 percent) and U.S. employment by 176,000 jobs (0.12 percent). The U.S. would see gains in both imports and exports if the deal is ratified, the ITC estimates.

"Since NAFTA removed almost all tariff barriers, the gains from USMCA are modest and largely come from reductions in the remaining non-tariff barriers," writes Inu Manak a trade policy scholar for the libertarian Cato Institute.

Perhaps the most politically important part of the report focuses on how the new trade deal would affect automakers. The Trump administration pushed for the inclusion of stricter rules that make it more difficult for cars and car parts to cross national borders duty-free—something the administration believes would reverse the trend of automaking jobs moving to Mexico under NAFTA. Under the proposed new rules, 75 percent of the component parts of vehicles would have to be produced in North America, and 40 percent would have to be built by workers earning at least $16 an hour—effectively putting a minimum wage on Mexican manufacturing plants.

Instead of complying with the new regulations to trade duty-free, it's likely that carmakers would simply pay the higher tariffs and pass those costs along to consumers. As a result, the ITC report says, consumer prices on cars in the U.S. would increase, resulting in an estimated 140,000 fewer vehicles sold. Auto manufacturing jobs would decline by about 1,500.

"The report underestimates the longer-term investments and increased U.S. auto parts sourcing that will be made in our sector as a result of the certainty and predictability the USMCA will deliver," he said.

Previously, interest groups representing automakers and dealers had been skeptical about the NAFTA rewrite. Throwing support behind Trump's USMCA may be a political calculation—essentially, a bet that getting the USMCA through Congress is the best way to get the president to back away from his threats to tear-up NAFTA without a replacement, an outcome that would be disastrous for automakers and the rest of the U.S. economy. 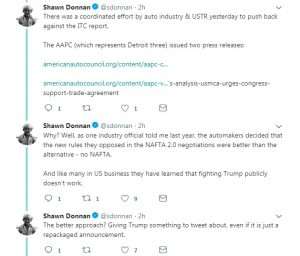 There's something to be said for that promise of trade stability. Canada and Mexico are the two largest export markets for the United States, not to mention the second- and third-largest import markets.

It will now be up to Congress to weigh the modest gains and losses promised by the USMCA against the danger of not giving the president the win he seeks on trade. It's now clear that the NAFTA replacement won't dramatically alter the economic future of any of the three nations involved, but that doesn't mean Congress will shrug its shoulders and simply pass it.

"Donald Trump's NAFTA represents at best a minor update to NAFTA, which will offer only limited benefits to U.S. workers," said Sen. Ron Wyden (D–Ore.), the ranking Democrat on the Senate Finance Committee, which handles trade issues, in a statement. "The administration shouldn't squander the opportunity to lock in real, enforceable labor standards in Mexico." Democrats appear poised to oppose the USMCA on the grounds that it does not do enough to prevent moving jobs to Mexico—Speaker of the House Nancy Pelosi (D–Calif.) has said she will not hold a vote on the new trade deal until Mexico makes changes to its own labor policies.

But the deal is already too protectionist for other members of Congress, including a faction of Senate Republicans who oppose the new rules of origin for cars. In a statement released Thursday, Senate Finance Committee chairman Chuck Grassley (R–Iowa) was noncommittal about the USMCA. "I'm glad to see the report recognized USMCA's new economic benefits," Grassley said, promising a "thorough and thoughtful review" of the trade deal and ITC analysis.

The report, says Manak, "is unlikely to sway anyone in Congress from changing their already strongly held opinions on the agreement."

"If anything, the release of the ITC report clears the way for implementing legislation to come forward and the real battle for the passage of USMCA to begin."