Andrew Yang wants you to know: he's not a socialist.

The businessman is among the crowded field of 2020 Democratic presidential contenders and is campaigning almost solely on a universal basic income (UBI) proposal. Nicknamed his "Freedom Dividend," it promises to give $1,000 a month to every adult between the ages of 18 and 64.

It's a plan that reeks of pie-in-the-sky idealism. But, perhaps ironically, Yang's campaign is colored by his affinity for capitalism, particularly as the founder of a nonprofit—Venture for America—that trains young entrepreneurs. And he touts his pragmatism in what is almost certainly an attempt to sway skeptics.

"I've looked at the numbers…" Yang said repeatedly at a rally in Washington, D.C., on Monday evening, eliciting loud cheers from supporters who fervently waved signs that said "MATH."

The presidential hopeful told Reason that his Freedom Dividend would put "more people in a position where they can actually participate in a free market," making for a "much more dynamic" economy. 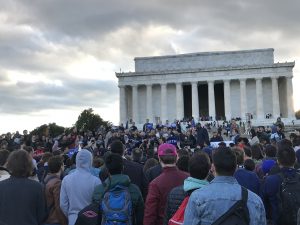 UBI has a bevy of full-throated critics on both sides of the aisle. In 2016, Oren Cass wrote in National Review that it is "a logical successor to the worst public policies and social movements of the past 50 years." Eduardo Porter of The New York Times said it provides a "non-negligible disincentive to work" and that government aid would become "less generous over time."

But it's also had an unlikely array of supporters over the years, like Thomas Paine and Martin Luther King, Jr.—not to mention famed libertarian economists Milton Friedman, Friedrich Hayek, and Charles Murray.

"The good news is that a well-designed UBI can do much more than help us to cope with disaster," Murray wrote in The Wall Street Journal in 2016. "It also could provide an invaluable benefit: injecting new resources and new energy into an American civic culture that has historically been one of our greatest assets but that has deteriorated alarmingly in recent decades."

Murray and Yang approach the UBI discussion from a similar vantage point: Automation is picking up speed, and it's coming for your job. "We are approaching a labor market in which entire trades and professions will be mere shadows of what they once were," says Murray. Similarly, Yang calls his Freedom Dividend a "tech check"—an homage to the retail workers, call center employees, and truck drivers who may increasingly find themselves without work in the coming years.

But Murray and Yang diverge considerably when it comes to how they would pay for a UBI—as well as how it would interact with the welfare system. Murray champions the burn-it-all-down approach, financing the stipend by eradicating all social safety net programs, including Social Security, Medicare, Medicaid, as well as housing and agricultural subsidies.

Yang sees it differently. He proposes centralizing health care costs and taxing tech giants like Amazon, who he says are automating jobs into oblivion and driving some stores across the country into the ground. Emboldened by the Freedom Dividend, recipients would spend their money in their local communities, facilitating a "trickle up economy."

And while he pictures welfare dependence waning, Yang maintains that it has its rightful place in society. "You don't want to take away benefits that hundreds of thousands of Americans are literally relying upon for their very survival," he told Reason. "The goal is to create more positive incentives." Over time, he says that welfare enrollment would decline with a rise in empowered consumers, "because many people in the Dividend would never find themselves in those programs."

The jury is certainly still out on UBI, and objections to Yang's Freedom Dividend are not without merit. Some research lends credence to the idea that a guaranteed check will discourage employment and overall productivity. Others counter that those fears are unfounded, citing Alaska's Permanent Fund: The state sends a yearly stipend to residents and has not experienced significant dips in aggregate employment. The latter claim is a bit harder to stomach, as Alaska paid residents $1,600 in 2018—hardly enough to quit your day job. Yang proposes $1,000 per month, although some argue it will help people pursue their professional goals by lowering barriers to entry.

Yang is also backing Medicare for All, the decriminalization of opioids (including heroin and fentanyl), as well as the regulation of social media companies to encourage healthier habits.

"We have the smartest engineers in the country trying to turn supercomputers into dopamine delivery systems for teenagers," he told Reason. To address this, he suggests that developers be required to promote moderation; according to Yang, an alert system that tells users to "find a human" or "go outside" would be a start. "Financial incentives of their companies will never suggest that they do this, and so they need a hand," he said—although the long-term benefit of such initiatives would likely be dubious.

Although Yang's candidacy is a long shot by most standards, he considers himself the perfect foil to President Trump.

"Donald Trump is our president today because he got a lot of the fundamental problems right," he said at his Monday night rally. "When he was going around saying, 'Hey things are not great,' and then the counter was 'Things actually are great,'—that was not the right response."

But Yang says that, while Trump may have diagnosed the problem, he's prescribing the wrong medicine. "His solutions are that we have to turn the clock back," he said. "Time only moves in one direction. I want to accelerate our economy and society. I want to prepare us for the true challenges of the 21st century.

"And I'm the right man for the job, because the opposite of Donald Trump is an Asian man who likes math!"

Jacob Sullum | From the January 2023 issue