It's 1989. Mikhail Gorbachev has been tamping down the tensions between the U.S. and the USSR, and both countries have recently agreed to significant arms reductions. Some American leaders are suggesting that the Cold War is coming to a close. By the end of the year, the Berlin Wall will be rubble and a wave of Eastern European dominoes will have started to fall, a process that will culminate with the death of the Soviet Union.

Clearly, it was time to prepare for a war with Russia.

In the last edition of the Friday A/V Club, we looked back at an official civil defense film about how to survive a nuclear attack. This time we turn to the more freewheeling world of the survivalist subculture, which found its own ways to prepare for wars and other disasters. One survivalist, an eccentric writer who called himself Kurt Saxon, published a series of DIY guides to improvised weaponry titled The Poor Man's James Bond. The books were successful enough that he decided to branch out into home video, with ultra-low-budget tapes like The Poor Man's James Bond Greets the Russians, released the same year the Berlin Wall came down.

Why was Saxon worried about the Russians in 1989? Near the start of the video, he lays out his argument: 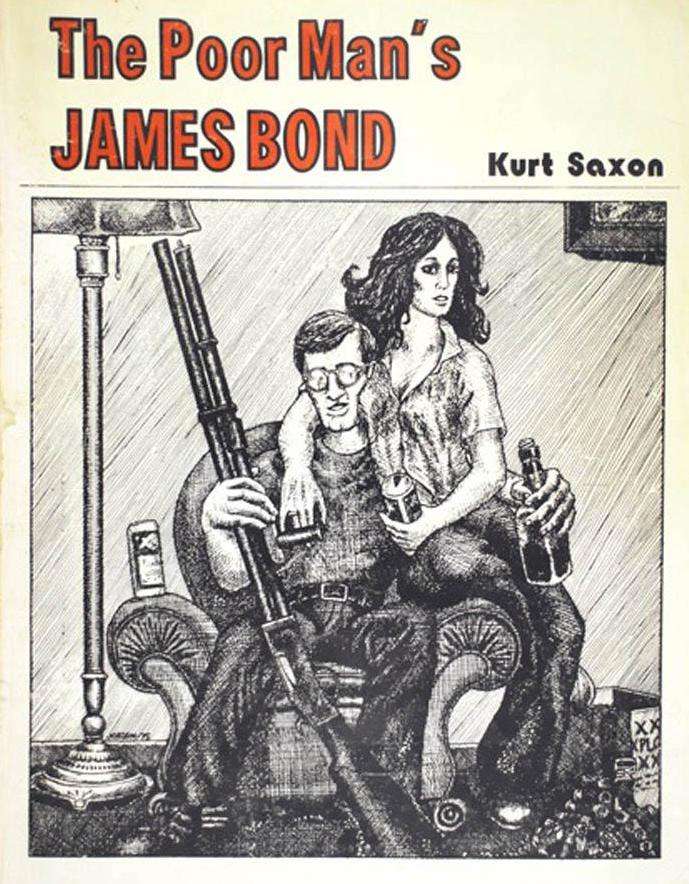 Gorbachev is a realist who would gamble on war abroad rather than relinquish power at home. His present attempts to relax tensions is simply a time-gaining ploy to build up his own Star Wars system.

The Russians have made a great show of destroying a few nuclear weapons. This is enough to pacify our moronic political hacks. Meanwhile, the Russians are preparing to move on Europe, both as a reason for bringing their own satellites back into line and to gain lootable territory. As we all know, the Soviet Union is far superior to the West in men and conventional armaments. It would take only a short time and a few major losses to force the West to retaliate with nuclear weapons.

The Russians have always been big on civil defense, while Americans have ignored our own programs. Russia boasts of facilities with which they hope to save up to 80 percent of their population in a full-scale nuclear war. I doubt that capability, but if they only save 50 percent that would still leave 150 million Soviets in a wasteland who could not survive without conquest.

So in order to survive, they would pour across the Bering Straits into Alaska, then to Canada, then the lower 48 states.

Scenario established, Saxon turns to teaching his audience how to make ricin, explosives, and other items that might come in handy if you find yourself transported into the Red Dawn universe. Saxon comes across as a cheerful chemistry teacher with a little too much enthusiasm for his subject, or maybe as the host of a public-access cooking show who has suddenly developed a taste for right-wing literature. (This was back when the fear of a Russian takeover was concentrated on the far right, not the center-left.) I get the impression that Saxon would be whipping up these recipes whether or not he thought an apocalypse was on the horizon. When he isn't suggesting ways to use his products to fight the reds ("on a crowded street, you just go up in back of some Russian soldiers, you just give him a quick stab and then fade into the crowd, and he'll just rub his behind for a little bit, and then he will die in about three days of pneumonia"), he's bubbling over about how much fun it is to mix these chemicals.

And there may be another motive here too. At the end of video, after waxing a bit about the world's environmental problems, Saxon ruminates about the "heaven on earth" we could have once the "great culling" is over. The apocalyptic often goes hand in hand with the utopian, and our host turns out to have a vague but heartfelt utopian vision of his own.

You might not guess it from the video's reverent words for the French Resistance, but Saxon used to be a neo-Nazi. When Saxon testified in 1970 to a Senate committee investigating "Riots, Civil and Criminal Disorders," Sen. Charles H. Percy (R-Ill.) asked him whether he has ever "been associated as a member of a militant right wing." Saxon replied, "Oh, I was a stormtrooper about a year. I was also in the Minutemen and the Birch Society. But I haven't been in politics for the last three years."

(To read about some more sensible preppers, go here. For past editions of the Friday A/V Club, go here. To read the full transcript of Saxon's Senate testimony—and you should, because it takes some gloriously bizarre turns—go here. Sadly, the senators didn't inquire about Saxon's time in the Church of Satan, but one moment in that dalliance is remembered here.)