One of my favorite books about architecture is Stewart Brand's How Buildings Learn, a text that treats buildings as dynamic, evolving systems. It is shot through with disdain for architects who treat a structure as a "statement" without much thought for the practical impact on the people who actually live or work in it, and it bubbles over with appreciation for the trial-and-error process of adjusting, adapting, and maintaining a building over time. Put another way, it has a healthy skepticism toward grand plans and a respect for autonomous activity and evolved order. 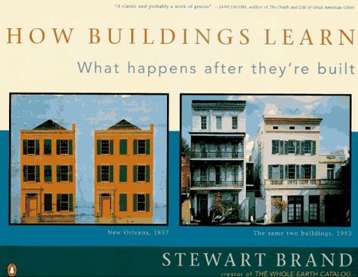 In 1997, three years after the book came out, the BBC turned it into a six-episode documentary. Brand scripted and hosted it; Brian Eno composed the music; writers ranging from Christopher Alexander to Joel Garreau appeared in it, along with a lot of people discussing places they've lived in, worked in, built, or rebuilt. Twenty years later, the series is still worth watching.

Here's episode one, which chastises arrogant starchitects and praises buildings that are able to learn over time. "This building grew into its glory gradually, over 500 years," Brand says of the Palazzo Pubblico in Siena. "Who was the main architect? Time."

Episode two celebrates what Brand calls "low-road" buildings, from storage modules to mobile homes—places where "you spend less money and you get more freedom." This one is probably my favorite installment:

Episode three looks at ways to apply the lessons of low-road buildings to other structures, making them more open to adaptation and change. Brand also reprises his book's caustic comments about the geodesic domes he promoted in his days running the Whole Earth Catalog:

Episode four is a jeremiad against zoning and other sorts of controls that get in the way of experimentation and adaptation:

Episode five, on maintenance, is as much about how buildings die as how they live:

And then there's the final episode, which describes the different layers of a building, each evolving at a different rate. It concludes with a tribute to "the great survivors among buildings," which "are only sometimes distinguished-looking. What they have is an offhand mastery that seems haphazard, and layers and layers of soul." And there, with some closing shots of the home Robinson Jeffers built for himself on the California coast, the series ends:

(Hat tip: Dan Colman. Reason interviewed Brand back in 2010; to read that, go here. For past editions of the Friday A/V Club, go here.)