While Trump gobbles the oxygen, Reason keeps pointing out the awful ideas and practices of the Democratic frontrunner 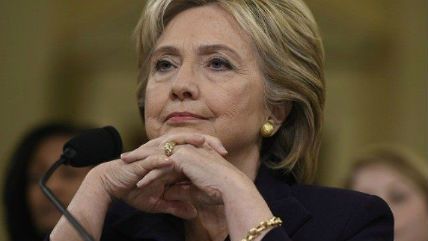 It's the final day of Reason's annual Webathon, which is theeeeeees close to reaching its goal of 1,178 donors, though a little bit further away in attaining the targeted $250,000 in tax-deductible donations to support our tireless, libertarian manic pixie dream-journalism. You know what that means: Even more posts here, until we fill that rectangle with orange!

Please to make donation on Reason in the moment of now!

Let us now pause to marvel at the Hillary Clinton news that Donald Trump's headline-grabbing Americo-fascist proposals and comments have pushed down from the front page:

* Tomorrow, Clinton is scheduled to propose an "exit tax" on American corporations moving their headquarters overseas. Say what you will about nationalistic mercantilism—at least it's an ethos!

* On Friday, she threatened to punish Internet companies if they don't sufficiently censor people who celebrate terroristic violence:

"If you look at the story about this woman, and maybe the man too, who got radicalized, self-radicalized, we're going to need help from Facebook, and from YouTube and from Twitter," she said. "They cannot permit the recruitment and the actual direction of attacks or the celebration of violence by this sophisticated Internet user. … They're going to have to help us take down these announcements and these appeals."

* Clinton's non-sequiturial response to the San Bernardino terrorist mass-shooting this past week has included extending the due-process travesty of the No-Fly list to remove the 2nd Amendment rights of disfavored minorities who have never been charged with a crime, and responding to the yeah-but-that-wouldn't-have-affected-this-shooting critique by saying daffy nonsense like, "How do you prove a negative?":

"I don't know exactly what it would have or could have prevented," she said. "I do know we've got to start implementing sensible gun safety measures and this seems among the most sensible that I know of."

* Her ongoing response to ISIS and related terrorism remains an incoherent mix of more-hawkishness-than-Obama and less-hawkishness-than-Lindsey Graham, with vows like "This is a worldwide fight and America must lead it," directly preceding comments such as "If we have learned anything from 15 years of war in Iraq and Afghanistan, it's that local people and nations have to secure their own communities." Meanwhile, incredibly, she is holding up her disastrous Libya intervention as an example of "smart power at its best."

* And she's been touting a new quarter-billiontrillion-dollar infrastructure spending plan without so much as nodding in the vague direction of how such a thing might be paid for.

In other words, this has been a typical week for American politics in 2015: While Trump—who prediction markets say has only a 9 percent chance of winning the presidency—drives the news cycle, Clinton (currently prediction-marketing at 56 percent) spits out one terrible idea after another. And Reason is there to cover all of them. As we have throughout this campaign, and in fact through the decades.

Before taking you on a tour of our Hillary coverage, a reminder of why we're all here: Please donate to Reason to make more of this watchdoggery possible!

You know how Peter Suderman this morning pointed out that Donald Trump is a bad person? Let's document the same accurate claim for the Democratic frontrunner, starting with her ugly habit of lying.

Clinton has lied and lied and lied some more about the private email server she maintained as secretary of state. She lied, bizarrely, in saying that her husband's awful Defense of Marriage Act (which she supported and Reason vociferously opposed at the time) was somehow an effort to protect gay people. And she continues to tell a very big lie about whistleblowers and Edward Snowden:

Hillary Clinton thinks spending $350 billion in federal money on higher education will make college cheaper. In a time of unprecedented national debt and federal deficits as far as the eye can see, she is promising that she can afford all of her new spending proposals without increasing taxes. She has advocated making companies pay their interns, while not paying her own interns. She is forever running on Bill Clinton's economic record while forever repudiating the policies that produced it. Her views on the free market vs. government is summed up tidily by the quote, "Don't let anybody tell you that its corporations and businesses that create jobs."

More choice Hillary quotes Reason has brought to your attention over the years:

* Drug legalization "is not likely to work" because "there is just too much money in it."

* And more recently: "We really need to have camps for adults. … None of the serious stuff. None of the life challenge stuff. More fun. I think we have a huge 'fun deficit' in America."

We've got at least 11, maybe 61, and perhaps even 109 more months of Hillary Rodham Clinton being at or near the most powerful seat atop the federal leviathan. Reason will be watchdogging her every move, through the principled lens of free minds and free markets, notions that she has always kept at arm's length.