Michael Bond has written a richly detailed article for New Scientist about the psychology and behavior of crowds. Here are some extracts, but you should read the whole thing: 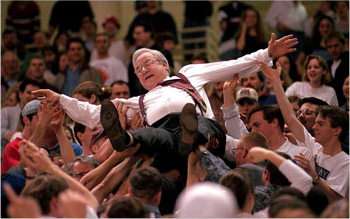 The "unruly mob" concept is usually taken as read and used as the basis for crowd control measures and evacuation procedures across the world. Yet it is almost entirely a myth. Research into how people behave at demonstrations, sports events, music festivals and other mass gatherings shows not only that crowds nearly always act in a highly rational way, but also that when facing an emergency, people in a crowd are more likely to cooperate than panic. Paradoxically, it is often actions such as kettling [a police tactic of corraling an entire crowd into a small area] that lead to violence breaking out. Often, the best thing authorities can do is leave a crowd to its own devices….

What are the lessons from all this? One of the most important is that the current approach to managing crowds, which is all about control and containment, can be counterproductive. Police tend to assume that people in crowds are prone to random acts of violence and disorder, and treat them accordingly. But aggressive policing is likely to trigger an aggressive response as the crowd reacts collectively against the external threat. This is why many researchers consider kettling to be a bad idea. "You're treating the crowd indiscriminately, and that can change the psychology of the crowd, shifting it towards rather than away from violence," says [Clifford] Stott. He has found that low-profile policing can significantly reduce the aggressiveness of football crowds, and that if left alone they will usually police themselves.

Emergency services should also take note: in a situation such as a terrorist attack or fire, a crowd left to its own devices will often find the best solution. Attempts to intervene to prevent people panicking, such as restricting their movements, could make panic more likely. The key, says [Tricia] Wachtendorf, is to give crowds as much information as possible, as they are likely to use it wisely.

There's "no question," Bond concedes, "that being part of a group can sometimes lead people to do appalling things that they would usually abhor" and that "the cover crowds offer can attract individuals who are intent on causing trouble." Nonetheless, "crowd violence is actually extremely rare." And intrusive crowd management can make such disorder more rather than less likely.