Leo and gang tell me not to vote (at least they do when remixed by reason.tv), and so I shan't.

In today's Ottawa Citizen, reason contributor Will Wilkinson praises Canadian apathy. This cycle's 59 percent turnout was the lowest in the nation's history:

We humans are adversarial beings, easily riled by us-versus-them conflict. (Even Canadians!) Democratic politics is a wonderful way to peacefully channel social antagonism into ritual symbolic warfare. High voter turnout is as likely to reflect angry social division as it is to augur the reign of Kumbaya social cohesion.

Indeed, lower levels of turnout may suggest that voters actually trust each other more—that fewer feel an urgent need to vote defensively, to guard against competing interests or ideologies. Is it really all that bad if a broad swath of voters, relatively happy with the status quo, sit it out from a decided lack of pique?

Republicans Can No Longer Deny the Reality of Donald Trump

Meddling in the Ballot Box

Eric Boehm | From the February 2021 issue

Ron Paul Says He's Been Locked Out of His Account, but Facebook Says It Was a Mistake

No one has a right to a Facebook platform, but purges can and should be criticized.

Yes, the Senate May Hold Trump's Impeachment Trial After He Leaves Office 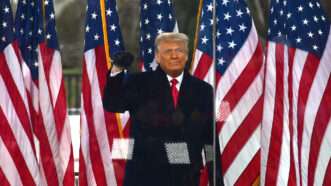 Prosecuting Trump for Incitement Would Set a Dangerous Precedent

Unlike the cancellation of Josh Hawley’s book, such criminal charges pose a real threat to freedom of speech.