Between December 7 and 13, Cornell University reported 903 COVID-19 cases, many of which were of the omicron variant, among students. CNN breathlessly reported the case count in a headline days later.

Despite the extraordinarily low risk of deaths and hospitalizations, the school still shut down its campus in mid-December, canceling all activities and sports while moving final exams online. The winter graduation ceremony was canceled; students were encouraged to switch to grab-and-go options in the dining hall; and ironically, given that it's increasingly permissible to point out that healthy weights are linked to better COVID-19 outcomes, all on-campus gyms were shuttered. The first two weeks of instruction for the spring semester have been moved to remote. Cornell did not respond to Reason's request for comment as to how many of these cases have resulted in severe illness, hospitalizations, or deaths.

It's a similar story at Yale University, which also did not respond to request for comment. There, 99.7 percent of undergraduate students are vaccinated (93.9 percent of staff are vaccinated, mirroring Cornell's data). Due to omicron, the start of the term has been pushed back to January 25, with in-person teaching finally beginning on February 7. Students must receive booster shots by January 18, adding to the existing vaccine mandate. Students must quarantine in their dorms following a COVID-19 test taken upon arrival, released only to grab food. They are barred from frequenting businesses in surrounding New Haven, even if eating outdoors—the only exception carved out is for curbside takeout.

These advances, coupled with the fact that omicron results in less severe illness than prior variants, apparently have very little bearing on how university administrators are responding to this latest surge. Their decision to shut down campuses "reflects an outmoded level of caution," writes Emily Oster in The Atlantic, as well as "a failure of universities to protect their students' interests."

"Now that we have vaccines, campus restrictions have taken on an increasingly absurd character — ruining the college experience in a (failed) attempt to control a virus that poses minimal risk to students," writes Cornell student Matthew Samilow at National Review. "The claim that these restrictions work is designed to be unfalsifiable: If cases are low, the administration says it's because the restrictions are working; if cases are high, they say it's because students aren't following the restrictions enough. Either way, the question of whether the restrictions actually work is never answered."

Other students share Samilow's frustrations. Roy Matthews, who graduated from Maine's Bates College a few months ago, tells Reason, "I was so ready to leave," calling the required daily nasal-swab tests a "riveting good time." (If you missed three in a row, he says, you'd be swiftly kicked off campus.)

"It's turned into a complete clusterfuck…it's not the same school it was two years ago, or even three years ago. There's no plan to phase [COVID-19 restrictions] out or reduce the price tag because they're not having in-person classes," he says, noting that current students have had restrictions ratcheted up due to omicron's surge.

Travis Nix, a student at Georgetown Law who has had three out of four semesters so far conducted entirely online, says the school has failed to indicate when mask requirements will be removed. "We're having all these restrictions to give the appearance of safety…but there's very little safety risk with omicron when you have a student body that is 100 percent vaccinated essentially." Many schools, including each one mentioned in this piece, have vaccine mandates in place for students, with many of them adding booster requirements, and some forcing students to get tested on a regular basis.

Meanwhile, NBC News has invited experts on to talk about why would-be college applicants have, over the past year, "dropped [college] from their radar," with few considering that people's decision making may be affected by the terms of the deal changing. When all you get for your tuition is a glorified Khan Academy seminar paired with cyclical house arrest and intrusive testing regimes, why bother?

In perhaps the most tedious twist of all, pro-union organizers at Bates are alleging that anti-union elements have recently violated the school's COVID-19 protocol by bringing an outside consultant into school buildings, showing yet another example of pandemic concerns being wielded to get favorable political outcomes—a strategy perfected in big cities like Chicago and New York over the last two years by America's most illustrious teachers unions.

But it doesn't all have to be this way. In many places, it's not.

"Maybe the best feature of this year's edition is that I won't have to say too much about viruses, testing and tracing, quarantine space, or vaccination rates," wrote Purdue University President Mitch Daniels on January 5.

"With vaccination rates, achieved through personal choice rather than a 'mandate,' infections have been a fraction of last year's. Most important, we have seen virtually no severe cases, with almost none rising above Level 4 on the 6-level Severity Index we devised in 2020." Of the campus population, 88 percent have submitted proof of vaccination to the university, without a mandate compelling them to do so. The school's case severity levels "are based on several factors; primarily, what symptoms the patient is exhibiting (if any) and whether they have any comorbidities," notes Purdue's COVID-19 dashboard. Other schools (or news outlets like CNN) could choose to collect and publish similar data, to help students, parents, and staff discern whether cases are presenting in the real world as serious threats that warrant such restrictive measures, but few have made such data publicly available or provided it upon request. 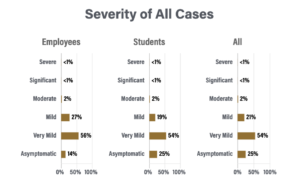 Colleges clearly aren't bubbles, but parts of a larger ecosystem. Many people in favor of restrictive omicron-related policies have pointed to the fact that many faculty members are elderly and in need of heightened protection, or that the rate of spread on a college campus affects people who live in and service college towns—bar and restaurant workers, landlords, repairmen.

But college administrators at elite universities seem to be managing toward exceptions, not rules. They seem to be keeping liability and PR in mind, with little eye toward giving their paying customers the once-in-a-lifetime quality experience they advertised. On campuses where vast swaths of the total population are fully vaccinated and where omicron poses little risk of severe illness or death, hypercautious administrators are denying students the intellectual and social environment they came for, asking them to be compliant hermits once again in pursuit of a COVID Zero that may never come.