Lots of Talk But Much Less Action on Police Reform

Getting government officials to put their packs of enforcers on shorter leashes is the definition of an uphill battle. 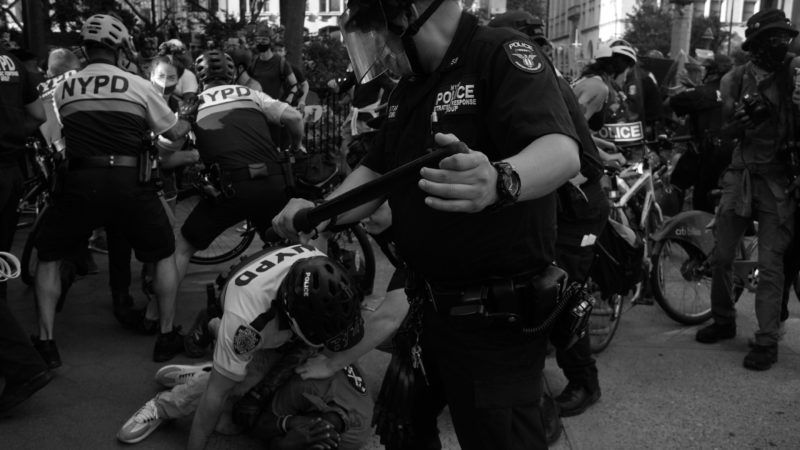 Protests against law-enforcement abuses continue across the country, but police and their supporters are hardly ready to throw in the towel. While some progress has been made at the state level, cops aren't letting go of their tough tactics or their opposition to reforms. And government officials just can't quit their addiction to deploying armies of enforcers.

In other words, don't hold your breath for police abolition, or defunding, or anything more than modest turd-polishing in the near future.

Perhaps the best summary of the situation is to point out that roughly two weeks after reports that federal agents in unmarked vehicles were snatching anti-police protesters off the streets in Portland, Oregon, New York City cops admitted to doing the same thing. Given that such federal conduct infuriated Oregonians and gave new life to often-violent demonstrations, the NYPD move looks like a huge fuck-you to the police reform movement.

So, for that matter, does the push by New York police unions to block the release of disciplinary records under a new state law. This week, they won a court order temporarily keeping the records from public eyes.

New York City's district attorneys are on the same wavelength, showing little enthusiasm for a new ban on chokeholds of the sort that killed George Floyd. "It is hard for me to imagine a case where an officer making a lawful arrest should be charged with the diaphragm contact section of the City law," said Staten Island District Attorney Michael E. McMahon.

Not that the Portland situation has been resolved. A day after Oregon Gov. Kate Brown announced "a phased withdrawal of federal officers" who "have acted as an occupying force, refused accountability, and brought violence and strife to our community," the president threw shade on the deal. "Kate Brown, Governor of Oregon, isn't doing her job. She must clear out, and in some cases arrest, the Anarchists & Agitators in Portland. If she can't do it, the Federal Government will do it for her. We will not be leaving until there is safety!" he tweeted.

In June, Oregon did pass a package of modest police-reform measures. The reforms restricted chokeholds and riot-control weapons and made it easier to discipline misbehaving cops. But they didn't do much to address core problems with law enforcement, such as qualified immunity, which makes it difficult to sue officers (and other officials) for rights violations.

Qualified immunity is at issue in Massachusetts, where it has hung up legislation intended to make cops more accountable. "Police unions have been fighting to keep it unchanged, while others want it abolished," WBUR notes. So far, they've blocked a state Senate bill that would make misconduct more subject to lawsuits.

On a positive note, qualified immunity was trimmed in Colorado. The new "law does ensure, at least with respect to police officers, that Coloradans will have a robust alternative remedy to [federal civil rights] claims for violations of their constitutional rights," reports the Cato Institute's Jay Schweikert.

The Colorado law may be the most substantial reform so far, since it reshuffles incentives for police officers who now know that they'll face greater personal liability for misconduct.

"I've read and re-read the bill and see nothing new, nothing that changes the manner in which police misconduct cases will be litigated in Connecticut," cautions attorney Norman Pattis (with whom I've spoken about jury issues in the past). "It's sound and fury signifying nothing."

Fundamental changes, such as dumping qualified immunity, are much harder to push through legislatures than promises of tougher police oversight and prohibitions on a few high-profile tactics. That's especially true with police reform hardening as a largely partisan issue, as police unions line up with Republicans and reformers join hands with Democrats.

On the national stage, that divide is symbolized by the feud between the Republican White House and Democratic governors and mayors over law-and-order issues.

But a lot of the feuding is more about role-playing to rile-up the party faithful than it is about real differences over policing. At the end of the day, government is about forcing people to do things they don't want to do or forbidding them to do things they do want to do. To accomplish that goal requires enforcers who can be set on people who refuse to comply.

For example, Washington, D.C., Mayor Muriel Bowser is very clear about what people should do if they encounter people who refuse to abide by the city's face mask mandate.

"They should call the police and the police will enforce it," she said this week in a city that recently hosted large protests over the way police go about enforcing laws of any sort.

Take that face mask mandate and multiply it by the multitudes of mandates, restrictions, and prohibitions around the country, and it becomes apparent why there's a lot more enthusiasm for talking about changing policing than there is enthusiasm for real change. Reform legislation has to be passed by lawmakers who aren't exactly champing at the bit to weaken their ability to force laws down the throats of the public.

Any reforms that do get passed have to be implemented by the likes of the New York City district attorneys turning up their noses at prosecuting cops for using illegal chokeholds.

That's not to say that law enforcement isn't in for some sort of overhaul—reforms are being passed, in fits and starts, even if they feature big arguments over (mostly) little changes. But people go into government precisely so they can send police out to enforce laws against the rest of us. Getting government officials to put their packs of enforcers on shorter leashes is the definition of an uphill battle.