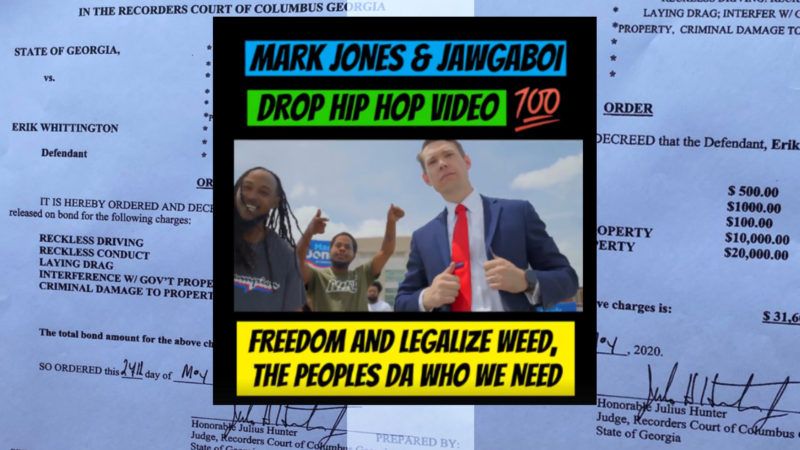 Regulation run amok? Prosecutors in Columbus, Georgia, say doing donuts in a city parking lot without a permit is a multiple-felony offense. And they're using this to arrest people who appeared in a video for a district attorney candidate who wants to decriminalize marijuana.

Their offense? Appearing in a music video in support of Mark Jones, who is running for district attorney of the Chattahoochee Judicial Circuit and challenging incumbent Julia Slater.

The video ad, titled "Get Out and Vote!" features rapper JawGa Boi and includes lyrics like "Freedom and legalize weed, the people's D.A. who we need." The video also includes aerial shots of a car driving circles around the parking lot of the Columbus Civic Center.

"Nobody had been notified with the city," Columbus Mayor Skip Henderson told the Ledger-Enquirer. "What they did was destroy government property."

Destroy is a bit strong, though the donuts done by the car in the video do appear to leave some skid marks.

Ana Cecilia Grimmett, Black's girlfriend, told the Ledger-Enquirer that Jones had paid Black $100 to be photographed next to the car and told them not to worry about the legality of doing donuts in the parking lot because the campaign had it covered.

Rather than simply take this up with Jones himself, however, Columbus cops went after two of the young people paid to appear in Jones' campaign ad—and the cops said more arrests (plural) are coming.

Not only that, but cops seem to have thrown as many charges as they could at the two men, all while a local judge attempted to keep them locked up in jail for days during a pandemic.

Black and Whittington now face two felony charges (interfering with government property and first-degree criminal damage to property) as well as three misdemeanor charges (reckless conduct, reckless driving, and laying drag). On Saturday, a judge ordered them held in jail without bond and set bond for the other charges at more than $200,000.

"The chief Recorder's Court judge, Julius Hunter, reviewed the bonds later Saturday and reduced them so both suspects could be released," reports the Ledger-Enquirer. "Otherwise they could have remained jailed over Memorial Day weekend, until Hunter returned to work Tuesday. Each suspect's felony bonds were cut to $20,000 for criminal damage and $10,000 for interference with government property."

On Facebook, Jones posted that "these charges obviously need to be dropped against Chris Black and Erik Whittington."

"The police and DA are coming after me because this campaign is shining a light on things they want hidden from the public," he said in a Saturday statement. "I will defend in court or pay the legal fees for anyone being maliciously prosecuted by the Government."

A church in California is asking the U.S. Supreme Court to intervene after Gov. Gavin Newsom declared via executive order that in-person church services must cease during the stay-at-home mandate. Last Friday, the U.S. Court of Appeals for the 9th Circuit rejected their request for emergency relief.

"Challenges to Covid-19-related emergency edicts have met with mixed results in federal courts," notes Politico. "The New Orleans-based Fifth Circuit and the Cincinnati-based Sixth Circuit have granted churches emergency relief from state orders, while the Chicago based 7th Circuit joined the San Francisco-based 9th in declining to step in."

In lieu of continued enhanced unemployment benefits, a new Republican proposal in Congress would award temporary $450 per week back-to-work bonuses. "Republicans are concerned that the current $600 a week unemployment payment—on top of state unemployment benefits—is so generous that it is discouraging people from going back to work and damping the economy's reopening amid the coronavirus pandemic," notes the Wall Street Journal. More:

A return-to-work bonus stands as an alternative to a measure being pushed by Senate Democrats, who are rallying behind a plan led by Sens. Mark Warner (D., Va.), Bernie Sanders (I., Vt.), Richard Blumenthal (D., Conn.) and Doug Jones (D., Ala.). The Democratic plan relies on a wage subsidy—the employee tax credit—to keep people on payrolls. It would cover 100% of wages and benefits, up to $90,000. Some Democrats say they might be open to ending the $600 in extra jobless benefits if Republicans rallied behind a wage subsidy.