Trump Attacks Biden on Drug Policy From the Left

It's an interesting strategy for a president who ran in 2016 on a Nixonian "law and order" platform. 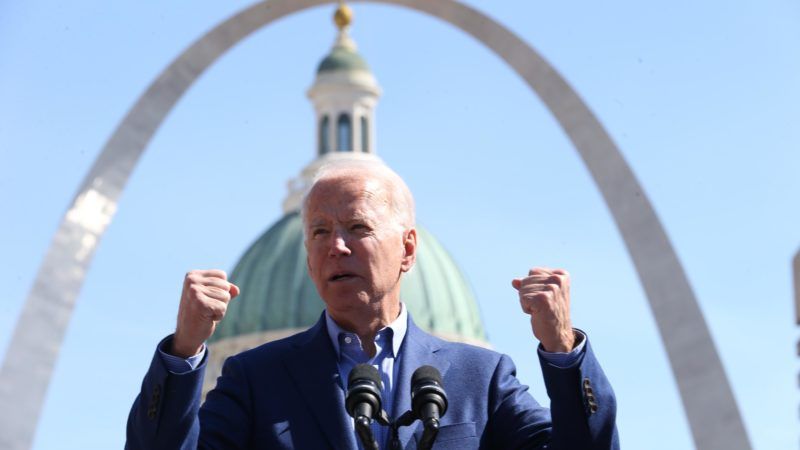 As part of President Donald Trump's attempt to portray himself as a criminal justice reformer, his reelection campaign last week attacked former Vice President Joe Biden, the leading contender for the Democratic nomination, for supporting harsh drug policies that have "wreck[ed] countless lives" and endangered overdose victims by discouraging bystanders from seeking help. It's an interesting gambit from a man who ran for president in 2016 on a "law and order" platform borrowed from Richard Nixon. Whether it will amount to more than that seems doubtful at this point, given Trump's silence on how he would reform drug policy or make the criminal justice system less mindlessly punitive.

"In addition to wrecking countless lives with the 1994 crime bill, during his time in the Senate, Biden's 'priority' was legislation that policy experts agree made the opioid epidemic far more deadly," says a March 4 press release from the Trump campaign. "Biden pioneered legislation that decreases the likelihood of people to call 911 if they witness a drug overdose and has even led to prosecutors filing homicide charges against drug overdose victims' loved ones."

The Violent Crime Control and Law Enforcement Act of 1994, which Biden was still bragging about as recently as 2015, created 60 new capital offenses, increased drug penalties, provided $10 billion for prison construction, and encouraged states to pass "truth in sentencing" laws that curtailed or eliminated parole. As Udi Ofer of the American Civil Liberties Union puts it, "the 1994 Biden Crime Bill" (as Biden has proudly called it) marked "the moment when both parties, at a national level, fully embraced the policies and political posturing that exacerbated the mass incarceration crisis we are trying to fix today." While the bill was not "the key driver of mass incarceration," the Sentencing Project's Marc Mauer observes, "it certainly escalated the scale of its impact." And Biden also played a leading role in earlier legislation that ramped up penalties for drug offenses, including the Comprehensive Crime Control Act of 1984, the Anti-Drug Abuse Act of 1986, and the Anti-Drug Abuse Act of 1988.

Today, Biden has repudiated his longtime support for mandatory minimum sentences, which he says should be abolished. He also wants to eliminate the irrational sentencing disparity between the smoked and snorted forms of cocaine, which was created by the 1986 law and reduced by the Fair Sentencing Act of 2010. And while continuing to resist the repeal of federal marijuana prohibition, Biden does now call for decriminalizing cannabis consumption and automatically expunging "all prior cannabis use convictions" (neither of which would have much of an impact at the federal level, since the Justice Department rarely prosecutes low-level marijuana cases). Although Trump touts his support for the FIRST STEP Act—a 2018 law that, among other things, retroactively applied the shorter crack cocaine sentences approved in 2010—he has said nothing about further steps beyond the relatively modest reforms included in that law.

The Trump campaign's charge that "Joe Biden made the opioid crisis worse" refers to a provision of the 1986 Anti-Drug Abuse Act that prescribed a sentence of 20 years to life for drug distribution when it results in death. Like many anti-drug policies enacted in the 1980s and '90s, that provision ostensibly was aimed at "kingpins" who make a fortune by selling drugs that kill people. But prosecutions for "drug-induced homicide" (mostly at the state level) usually involve low-level dealers and acquaintances close to overdose victims, since those are the cases in which the causal link is easiest to prove. And Trump is right that such cases can involve "homicide charges against drug overdose victims' loved ones." These prosecutions are not only cruel and unjust; they are potentially deadly, since fear of homicide charges is a powerful deterrent to calling 911 when someone overdoses.

The Trump campaign backed up its charge against Biden by linking to a 2019 Politico story by Zachary Siegel, which also discusses another harm-promoting policy backed by Biden. The 1986 Anti-Drug Abuse Act included a provision known as the "crack house statute," which made it a felony, punishable by up to 20 years in prison, large fines, and property forfeiture, to "knowingly open or maintain any place for the purpose of manufacturing, distributing, or using any controlled substance," or to "manage or control any building, room, or enclosure" and knowingly make it available for illegal drug use. Biden's Reducing Americans' Vulnerability to Ecstasy (RAVE) Act, the essence of which was included in the PROTECT Act of 2003, expanded that provision to cover temporary venues used for raves or other events where people consume drugs.

Critics of the RAVE Act pointed out that it discouraged harm-reducing measures such as allowing the distribution of pamphlets with advice for minimizing MDMA risks or even providing bottled water, since such precautions could be cited as evidence that a rave organizer knew attendees would be using drugs. Today federal prosecutors argue that the crack house statute makes it illegal to establish supervised injection facilities where people can use drugs in a safe, medically monitored setting. Prohibiting such facilities, which operate legally in scores of cities around the world, is arguably another way that "Joe Biden made the opioid crisis worse." But the president's re-election campaign is silent on that point, presumably because the Trump administration is using the threat of criminal prosecution to block supervised consumption sites.

Trump also has "made the opioid crisis worse" by ham-handedly cracking down on prescription analgesics, a policy that has hurt bona fide patients while driving nonmedical users toward black-market substitutes that are far more dangerous because their potency is highly variable and unpredictable. For his part, Biden threatens to prosecute employees of companies that make pain medication, although he is vague about the legal basis for that. He also vows to "eliminate overprescribing of prescription opioids for pain" and "improve the effectiveness of and access to alternative treatment for pain," which does not sound promising for people with chronic pain who have found that opioids are the only treatment that makes their lives bearable.

Trump has highlighted his use of clemency, and his administration reportedly is considering reforms that could help reduce the huge backlog of applications for pardons and commutations. Biden promises to "use the president's clemency power to secure the release of individuals facing unduly long sentences for certain non-violent and drug crimes." Citing the example of Barack Obama, who issued more commutations than any president in history, Biden's campaign says he "will continue this tradition and broadly use his clemency power for certain non-violent and drug crimes."

Given Biden's long history as a zealous drug warrior, his recent conversion should be viewed with skepticism. But at least he has laid out specific reforms he would pursue as president, while Trump has done nothing beyond bragging about his accomplishments and sniping at Biden's.