Louisville SWAT Team Looking for Pot Needlessly Terrorizes Family, Thanks to a False Tip, a Cursory Investigation, and a Detective's Nose

The cop claimed to detect "a strong smell of fresh marijuana coming from within the house," but police did not find any. 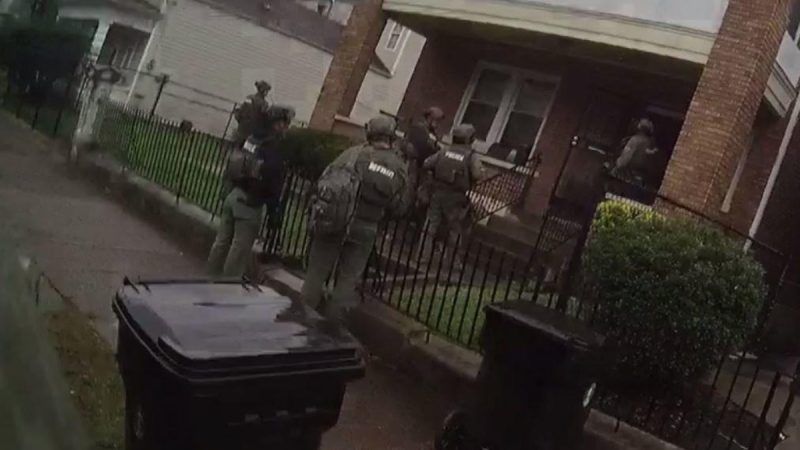 A Louisville, Kentucky, SWAT team looking for marijuana broke into a home and terrorized the family living there, based on claims police easily could have debunked if they had been doing their jobs properly, according to a lawsuit filed last week. The cops "continued to detain Plaintiffs, with rifles drawn on them, even after it became clear that the Residence was a family household—not a drug dealer's lair," the complaint says.

Ashlea Burr and Mario Daugherty say more than a dozen SWAT officers stormed into their home without warning on the morning of October 26, 2018, breaking the front door, setting off "exploding devices" (presumably flashbang grenades), and shouting commands while threatening them and their three teenaged children with "assault rifles." The family initially thought they were being robbed, and one of the children, a 13-year-old girl identified as "Z.S." in the lawsuit, "ran through the back door and into the yard in an effort to reach her grandmother's house next door." The cops sprang into action:

Officers drew their assault rifles on her, yelling commands at her to get on the ground….Z.S. was extremely frightened, began crying and submitted [by kneeling on] the ground. It was cold and rainy, and Z.S. was not wearing any socks, shoes or a jacket. She repeatedly requested to be taken to her grandmother's next door, but the Officers refused the requests, kept her in the cold, wet conditions, and kept their rifles on her.

The girl can be heard sobbing in a video of the raid's aftermath. "Hold on, hon, we're almost done, OK?" says one of the officers. "We'll get you back inside. You're not hurt, right? You're just scared? I'm sorry."

Burr and Daugherty's lawyer, Josh Rose, says police initially denied they had any video of the raid. After he pointed out that the SWAT officers were required to wear body cameras, he says, the Louisville Metro Police Department (LMPD) released a highly expurgated copy of the footage.

In his application for a warrant to search the house, Detective Joseph Tapp claimed the LMPD received a tip from someone who reported that "a black male named Anthony McClain is growing marijuana and has multiple bags of marijuana packaged for sale in the front bed room." According to Tapp, the tipster "also stated a white female named Holly was [McClain's] girlfriend and owned the house."

If Tapp had bothered to look up the property records, he would have seen that the house is in fact owned by a man named Kevin Hyde, who rents it to Burr and Daugherty. The lawsuit also notes that "nobody named Anthony McClain or Holly lived at the house at or near the time of the raid," that "Ashlea is not white," and that "nobody in the house was growing marijuana or had multiple bags of marijuana packaged for sale."

Aside from this obviously erroneous tip, the search warrant was based on three brief visits to the house. During his first "surveillance," on October 5, Tapp saw "a Black male" enter the house and leave 10 minutes later. Tapp then "approached the house to conduct a knock and talk." When he "stepped on the open porch," he said, "the smell of fresh marijuana could be smelled." He knocked on the door, but no one answered, so he left.

During his second "surveillance," on October 22, Tapp saw "a black male" arrive in a "gray Jaguar" with an Indiana license plate and enter the house. The car was registered to Daugherty, whom WDRB, the Fox TV station in Louisville, describes as "a local artist whose work has been featured at the Kentucky Derby Museum and on local news." The car was not registered to "a black male named Anthony McClain" or to a woman named Holly, which really should have given Tapp pause. The next day, three days before the raid, Tapp "approached the house and again was hit with a strong smell of fresh marijuana coming from within the house."

Tapp argued that the tip, "the witness of the short stay," and "the strong fresh smell of marijuana on separate occasions," combined with his "training and experience," provided probable cause for a search. Yet the tip was demonstrably false, visiting a house for 10 minutes is not inherently suspicious, and apparently there is something wrong with Tapp's nose, since police found no evidence of marijuana cultivation at the house.

Burr and Daugherty argue that "the raid was not supported by probable cause." They say it exemplifies lax training and oversight by the LMPD that results in "the issuance of search warrants in predominantly African American neighborhoods without probable cause and/or in an unreasonable manner in violation of the Fourth Amendment."

The plaintiffs also argue that the search was executed recklessly. "It is completely unreasonable to execute a warrant that vaguely mentions someone potentially smoking marijuana at a residence with a SWAT team of 14 officers, exploding devices, forced entry, and assault rifles, particularly when no investigation was done to determine who lived in the Residence and given the other false statements and omissions in the affidavit," they say. "Defendants' misconduct could have very easily resulted in the death of a parent or child for no good reason," and it "did result in the violation of Plaintiffs' constitutional rights and significant emotional damage."

Burr and Daugherty, who are asking for a jury trial in Jefferson County Circuit Court, are seeking compensatory damages, punitive damages, and legal fees. I called the LMPD for comment and will update this post if and when I get a response.