How Scalia's Absence Could Protect the Exclusionary Rule

SCOTUS seems evenly divided on a drug search arising from an illegal stop. 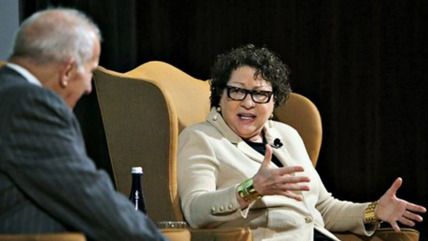 Although Antonin Scalia's critics on the left tended to portray him as a law-and-order conservative who automatically sided with cops in search-and-seizure cases, the late justice frequently defended the Fourth Amendment, a point that becomes clear when you consider his mixed record in cases arising from the war on drugs. But Scalia was no fan of the exclusionary rule, which deters violations of the Fourth Amendment by making illegally obtained evidence inadmissible. A case the Supreme Court heard this week suggests how Scalia's absence could help shore up that principle.

The case, Utah v. Strieff, began with a tip that the Salt Lake City Police Department received in December 2006. In response to a message from an anonymous caller who claimed "narcotics activity" was occurring at a house in South Salt Lake City, Officer Douglas Fackrell watched the place intermittently, for a total of three hours over the course of a week. He did not see much. Visits to the house were not "terribly frequent," but they were frequent and short enough to arouse Fackrell's suspicions. He decided to stop and question one of the visitors leaving the house so he "could find out what was going on" inside. That visitor happened to be Edward Strieff, who happened to have an outstanding warrant for a minor traffic offense, a fact that Fackrell discovered after asking for Strieff's ID and running a record check. Based on the warrant, Fackrell arrested Strieff and searched him, finding a bag of methamphetamine and drug paraphernalia in his pockets.

Since Fackrell did not have reasonable grounds to suspect Strieff was involved in criminal activity before stopping him, the initial detention was clearly illegal. Strieff argued that the evidence against him should be thrown out, since he would not have been searched if he had not been arrested, and he would not have been arrested if he had not been illegally detained. The Utah Supreme Court agreed, rejecting the government's claim that the intervening discovery of an outstanding warrant "attenuated" the connection between the Fourth Amendment violation and the search enough to make the evidence admissible.

Of the six justices who spoke during oral argument in the case on Monday, three seemed inclined to accept the attenuation argument, while the other three seemed likely to side with Strieff. George Washington University law professor Orin Kerr, a Fourth Amendment specialist, suggests that even split is likely to hold up when a vote is taken:

[Sonia] Sotomayor and Elena Kagan were clearly on the defense side, with Justice Ruth Bader Ginsburg probably there, too. Justice Samuel Alito and Chief Justice John Roberts seemed clearly on the government's side, with Kennedy probably with them. Justice Clarence Thomas maintained his usual silence, and Justice Stephen Breyer also asked no questions. In the past, Thomas has generally been a vote against the exclusionary rule and Breyer has generally been a vote in its favor.

If the vote is 4 to 4, the Utah Supreme Court's decision will stand, although the case will not set a national precedent. If Scalia were still on the Court, by contrast, the outcome might well have been yet another decision whittling away at the exclusionary rule.

Illustrating how such decisions encourage police abuses, Sotomayor noted that outstanding warrants for minor offenses are very common in some jurisdictions. According to the Justice Department's 2015 report on law enforcement in Ferguson, Missouri, more than three-quarters of the city's residents had outstanding warrants at the end of 2014. "There may be a very good incentive for just standing on the street corner in Ferguson and asking every citizen, 'Give me your ID; let me see your name,'" Sotomayor said. "And let me hope, because I have an 80 percent hance that you're going to have a warrant."

Kagan drove home Sotomayor's point. "There are a variety of circumstances in which police officers would really like to talk to somebody and really like to search them but don't have reasonable suspicion," she said. "And I think that the question that Justice Sotomayor is asking is if you're policing a community where there is some significant percentage of people who have arrest warrants out on them, it really does increase your incentive to make that stop on the chance that there will be a warrant that will allow you to search and admit whatever evidence you gained in that search."

In such a situation, cops would effectively be empowered to search many or most people at will, since a search is allowed following an arrest. Although police would be violating the Fourth Amendment by initiating such encounters, there would be no real consequences, since they could still use any evidence they found.

Alito's response to that concern was revealing. "There's a downside," he said. "If the officer makes an illegal stop, the officer exposes himself or herself to all sorts of consequences." In theory, yes. In practice, no. "Police rarely face consequences when they shoot innocent civilians," Slate's Mark Joseph Stern notes. "Does Alito really think they'll get in big trouble for detaining somebody unlawfully for a few minutes?"

Even in the unlikely event that the victim of an illegal stop files a lawsuit and either wins in court or obtains a settlement, the money will not come out of the officer's pocket. Cops tempted to embark on illegal fishing expeditions will not be deterred by fines they will never feel, but they may very well be deterred by the knowledge that they will have to throw the fish back.