The most successful solitary confinement reform this year will release 1,000 prisoners. 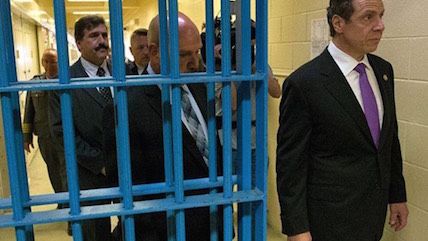 Governor Andrew Cuomo announced last Wednesday that around a quarter of New York's 4,000 prisoners in solitary confinement will be moved out and into safer correctional facilities.

The reform is the outcome of a lawsuit brought on by the New York Civil Liberties Union against the state. After two years of negotiations other policy changes are being implemented to end inmate abuse by prison officials, such as stopping the practice of using food to discipline prisoners.

The state's correctional officers union, however, expressed concern for the safety of its 20,000 members, responding in a statement, "it is simply wrong to unilaterally take the tools away from law enforcement officers who face dangerous situations on a daily basis."

As Reason TV found out in "'For Their Own Protection': Children in Long-Term Solitary Confinement", the reclusive nature of prison systems makes reform extremely difficult and their use of solitary confinement isn't so judicious.

Sealed off from most public scrutiny, and steeped in an insular culture of unaccountability, prisons are, by their very nature, excellent places to keep secrets. Even more concealed are the solitary-confinement cells, described by inmates as "prisons within prisons."

Far from being limited to the most violent offenders, solitary confinement is now used against perpetrators of minor crimes and children who are forced to await their trials in total isolation. Often, these stays are prolonged, lasting months or even years at a time.

To learn more of solitary confinement's painful effects watch "'For Their Own Protection': Children in Long-Term Solitary Confinement" above or read the original article here.